The Swiss MZW 04 (Mehrzweckwerfer 04; ‘multipurpose launcher 04’) is a less-lethal launcher developed for and used by the Swiss police. It remains little-known outside of the alpine state. Although generally very economically and socially stable, the significant upheavals throughout western society of the late 1960s also reached Switzerland. This resulted in turmoil and street battles between protesters and riot police, similar to seen in Europe more broadly. To supply the officers with a reliable and easy-to-use tool for riot scenarios, the Swiss Police sought to field a less-lethal launcher to engage groups of protestors with riot control agents (RCA), such as CS (2-chlorobenzalmalononitrile).

The firearm was fielded under the name Tränengaswerfer TW 73 (TW 73 tear gas launcher) and was widely used during responses to anti-nuclear movement protests. The TW 73 launchers were built from a quantity of surplus Karabiner K31 rifles, with only minor modifications to the operation of the weapon, thereby significantly reducing the amount of training that was needed to familiarise the user with the weapon. The state-owned RUAG company shortened the rifles and added a launching ‘cup’ with gas ports (see Figure 1.1). Launching grenades from the K31 rifle was not new to the Swiss, and they were able to build upon their experience with the development of the Wurfgranate 43/44, 44 and 48 developments. 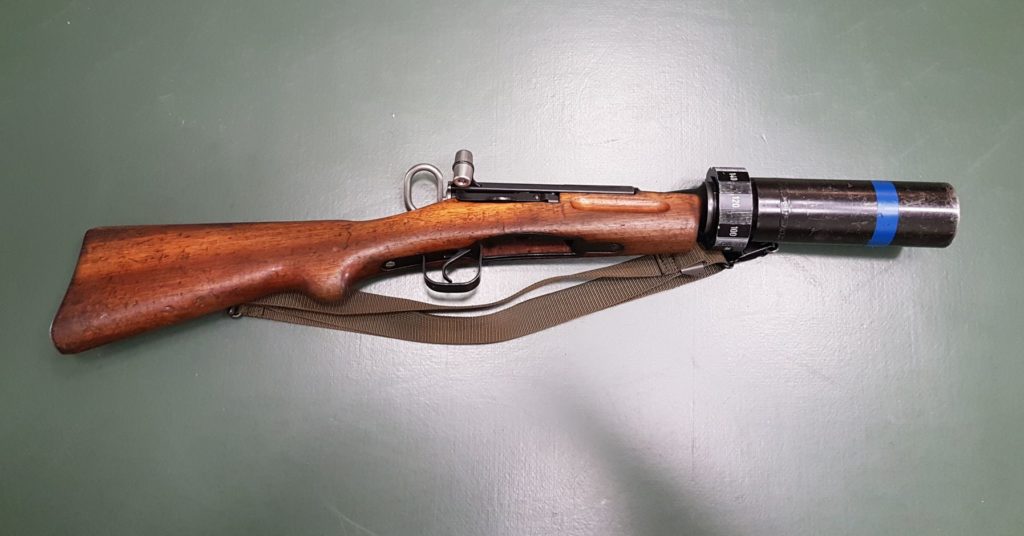 To make aiming simple under stress, the designers decided to install fixed sights; the launching cup assembly rotates, with each position lining up with one of several different-sized gas ports to regulate the range and trajectory of the projectile. The operator can turn the cup and dial-in on the requested range, whilst keeping the same sight picture. The ranges are clearly marked with white numbers (see Figure 1.2) for 80/100/120/140/160 metres. 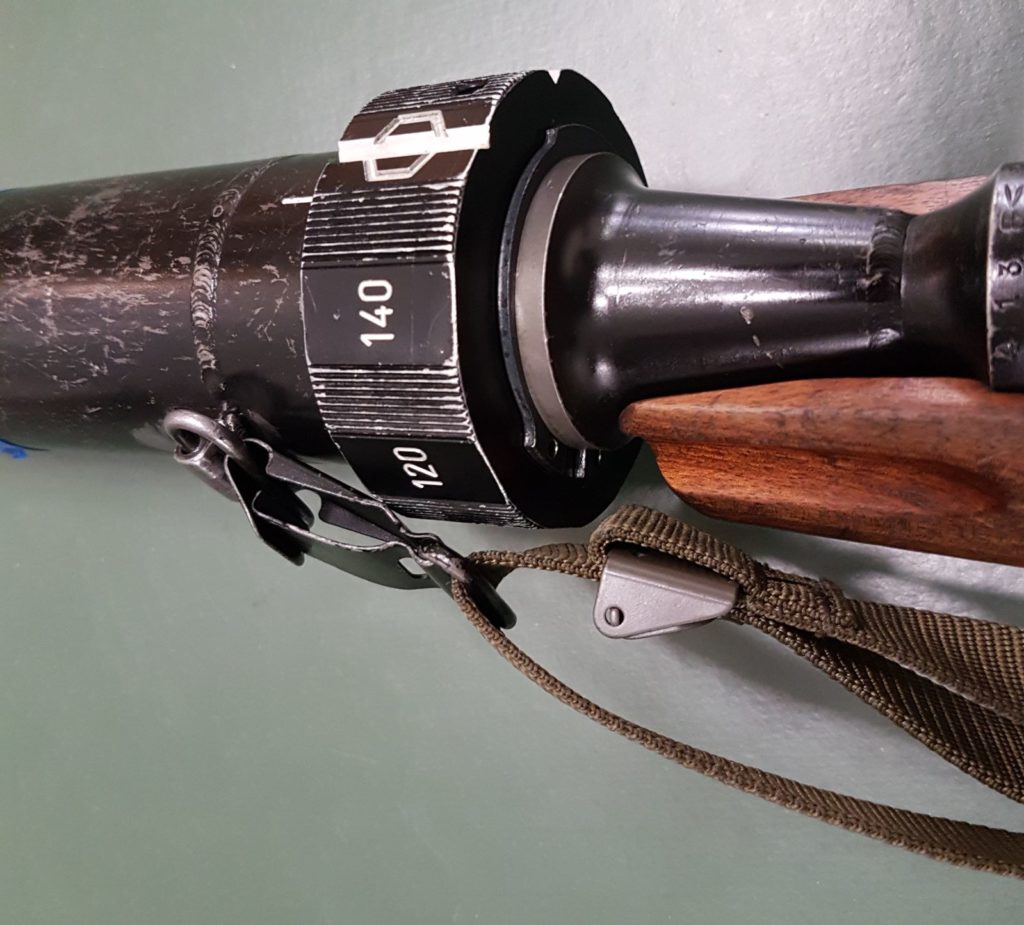 To propel the RCA canisters, a modified 7.5 × 55 mm GP11 blank cartridge was developed by RUAG. This is still manufactured in a modernised version today (see Figure 1.3). The detachable box magazine holds six rounds. To enable the user to operate the firearm with protective gloves the ring on the safety and the trigger guard was also significantly enlarged and modified. 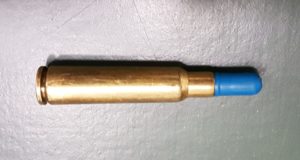 The TW 73 served the Swiss police of the different city and cantonal police forces well into the late 1980s, by which time it was seeing action during the violent conflicts between supporters of different football teams. The weapon was modernised as the Mehrzweckwerfer 73/91 (MZW 73/91), and a new kinetic impact round was developed and used, which meant the weapon truly became a multipurpose launcher.

The rubber buckshot projectile (Gummischrotpaket) consists of 35 pre-fragmented hexagonal rubber projectiles, each with a weight of 10 grams and a dimension of 27 × 18 mm. These are wrapped into a 350 g foil package (see Figure 1.4), which is torn apart by the force of the gas generated by the blank cartridge. This launches the fragments with a muzzle velocity of approximately 62.5 m/s, out to an effective engagement distance of roughly 20 m.

One user manual forbids the shooter to engage targets that are closer than 20 metres, unless the weapon is being used as per a lethal firearm in a self-defence situation. While the dispersion of the rubber fragments is quite controlled at 20 m (with a radius of some 4 m) the energy decline rapidly in flight, meaning the maximum effective range is around 50 m. While this data is still present in the weapon’s manual, experience has shown that the only effective but reasonably safe distance the rubber shot can be deployed at is very much around the 20 m mark. Importantly, the rubber buckshot can only be fired reliably when the rotating launching cup is dialled to the 160 m position with the ports closed. This is the only configuration provides enough propellant gasses to give the projectiles sufficient kinetic energy. 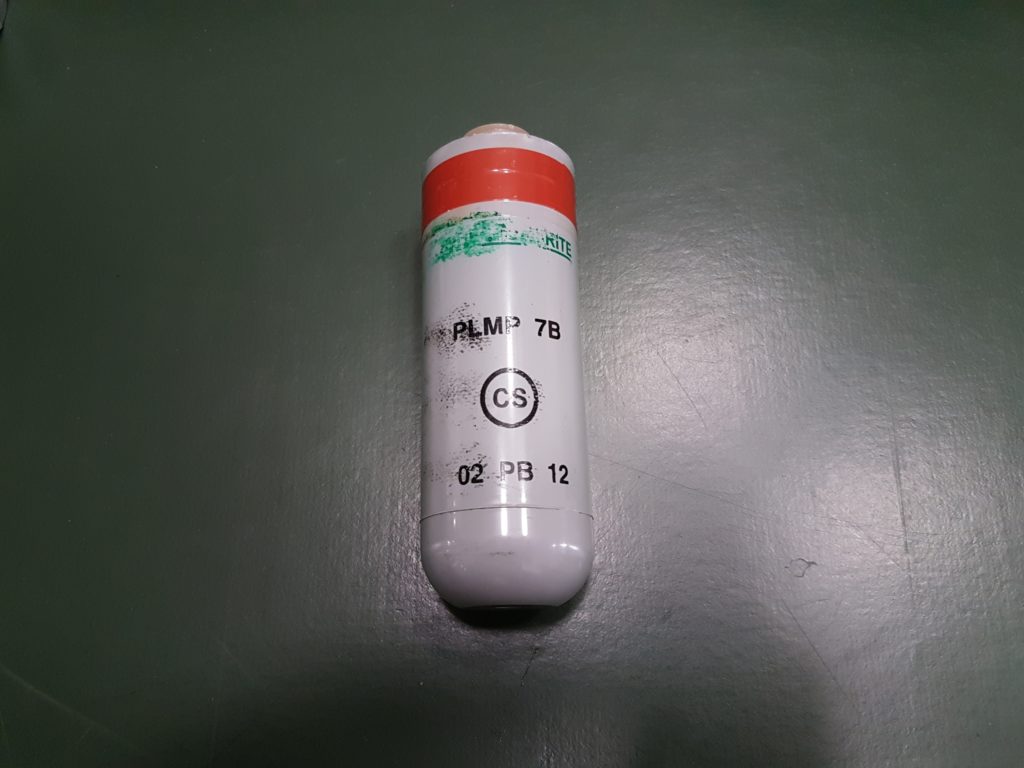 The weapon was modernised again in 2004, and is now known as the Mehrzweckwerfer 04 (MZW 04). Despite its very limited engagement range profile, it remains a reliable and potent anti-riot weapon. Operated by a designated grenadier and supported by an ammunition carrier, it is still employed to fire CS canisters (Reizstoff-Granate CS), the current model being designated the SNPE MP7 in Swiss service, out to a range of 180 m (see Figure 1.5). The SNPE MP7 weighs 350 g and has a muzzle velocity of 95 m/s. If the operator wants to fire the RCA canister past 80 m, a delaying fuse must be affixed to the round. This pyrotechnic fuse is ignited when the round is fired, adding an additional 2.5 second delay before the seven chambers of the projectile will begin to disperse CS. The canister will disperse CS for approximately 1 minute once ignited.

The ammunition for the MZW 04 is carried by both members of the team in a special backpack (see Figure 1.6). A typical loadout is 9 rubber buckshot rounds, 3 CS canisters, and 30 blank cartridges that now carry the designation Treib Pat 08. The ammunition carrier is also responsible for close protection and typically carries a shield. The combination of blank rounds, tear gas, and rubber buckshot also gives the operator three levels of escalation. 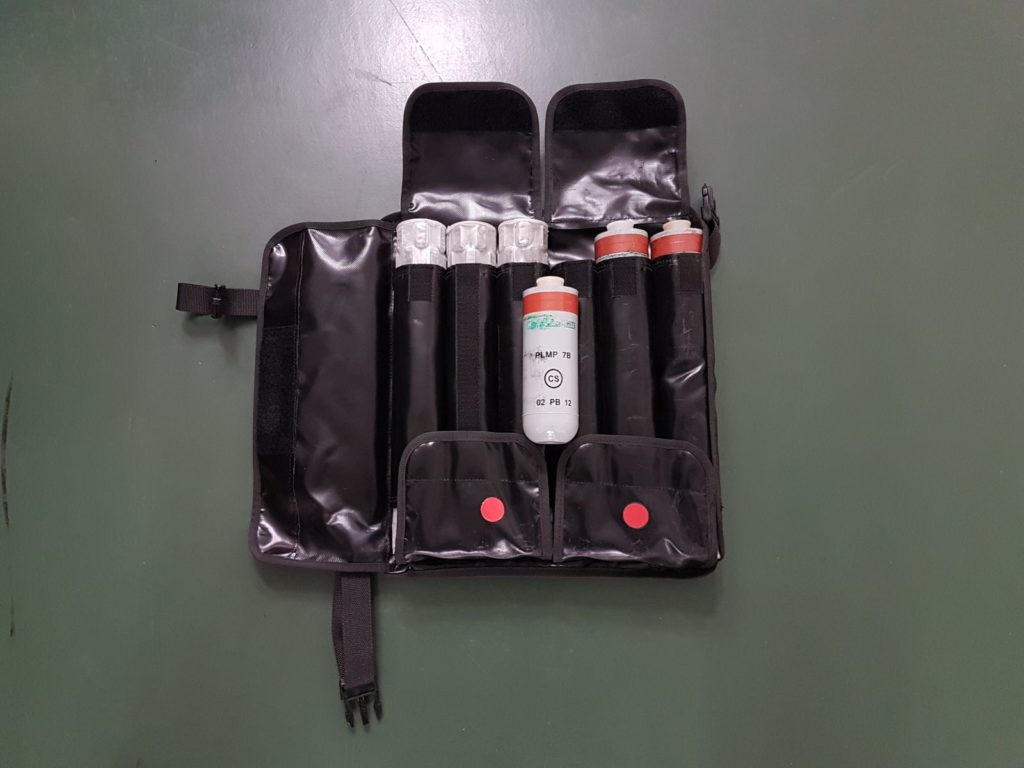 The MZW 04 has been targeted by some media, activists, and politicians as a ‘dangerous weapon’, with claims that its use represents overkill. Whilst there have been multiple cases of eye injuries over the years as a result of rubber shot, the weapon remains fairly squarely in the range of typical riot control devices employed around the world. The MZW 04 remains a reliable and trusted device in the portfolio of the Swiss riot police and represents the last piece of Karabiner K31 history that remains in active service today. 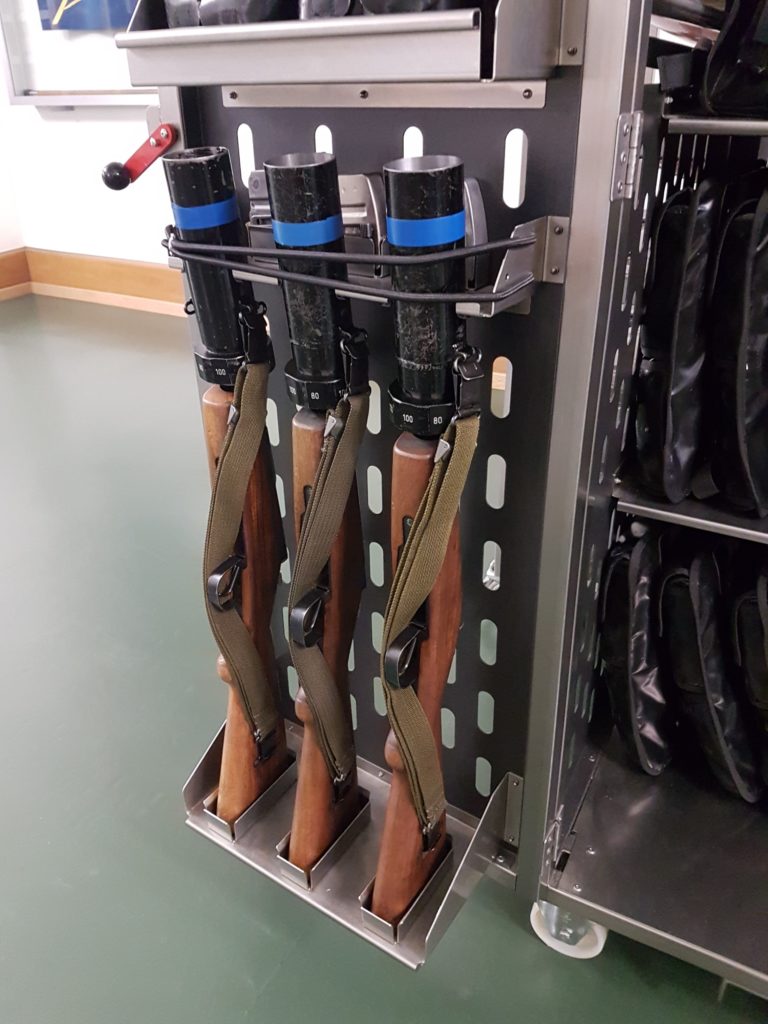