On 21 February 2016, the Abkhazian Network News Agency (ANNA News) and Frontinfo posted some footage seemingly filmed near Nabi Younes in Latakia Governorate, Syria. Amongst the footage is a fired cartridge case from a 40 × 46SR mm high explosive fragmentation (HE-FRAG) round produced in Bulgaria. The Arsenal 40×46 RLV-HEF round is of the 40 × 46SR mm calibre common amongst NATO states and other users, and produced widely around the world. The Arsenal RLV-HEF is built around the GLV-HEF projectile which delivers an explosive charge of 40 grams of  A-IX-1 (96% RDX phlegmatised with 4% paraffin wax) out to some 400 m. Ammunition of this type is most commonly employed with under-barrel or stand-alone grenade launchers, including multi-shot varieties documented in service with Syrian opposition groups, such as the Croatian RBG-6.

What is particularly interesting about the cartridge case is that it indicates that the round in question was produced in 2014. The presence of this cartridge case in Syria is clear evidence of the recent supply of ammunition during the ongoing fighting in Syria. Whilst perhaps not especially noteworthy in its own right, it is another data point that ARES and other organisations can record. 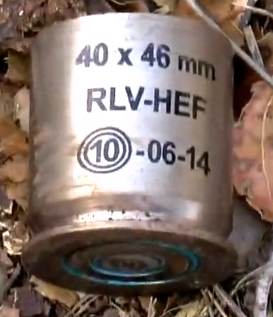 One thought on “Recent-production Bulgarian 40 mm ammunition in Syria”