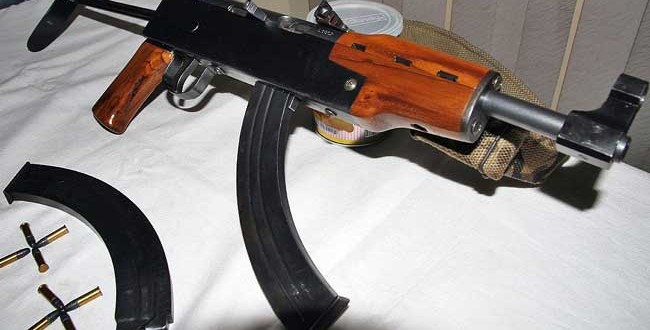 On 1 July 2016, five gunman attacked Holey Artisan Bakery in Gulshan Thana, Bangladesh, resulting in 29 deaths (20 patrons, two staff members, two police officers and all five of the attackers). Alongside clubs, knives and crude improvised hand greandes, the five gunmen were armed with locally craft-produced sub-machine guns (SMG) known to criminal groups as well as security agencies as the ‘AK-22’. This is typically stamped on the upper receivers of these guns. In recent months, these types of weapons have been more frequently seized; the earliest examples are believed to have been recovered in Chittagong in 2008. On 21 February 2016, RAB-7 (Rapid Action Battalion, Chittagong unit) seized three AK-22 SMGs from a militant training camp in the remote Banshkhali hills during an anti-terror operation. On April 23, RAB-7 seized five AK-22 rifles after raiding another training camp run by the militant outfit, Shaheed Hamja Brigade. According to security officials the weapons are becoming increasingly popular with criminals and militant groups alike due to their low cost (around Tk300,000 and Tk400,000) and the .22 LR ammunition it uses being cheap and widely available for civilian uses such as hunting and target shooting.

The weapons are cosmetically similar to the Kalashnikov series of rifles, appearing somewhat similar in size to the compact AKS-74U. Variants featuring both side-folding and telescoping wire and sheet metal stocks have been identified. Despite the visual similarity to AK type rifles, the weapons are mechanically much closer to simple sub-machine gun designs such as the British STEN, firing from an open-bolt with a simple lever sear trigger mechanism and having relatively few moving parts. The weapons are capable of automatic fire and use high capacity magazines of various sizes, which may also be craft-produced. Variations in quality and finish can be observed, with some examples being clearly hand painted and assembled with cheap Phillips head screws, while others appear to be blued and assembled with rivets or Allen head bolts. This likely suggests that designs are improvised from materials at hand, and may indicated the work of multiple gunsmiths or groups.

India’s National Investigation Agency have reportedly learned through police interviews with a suspected operative of Jamaat-ul-Mujahideen Bangladesh (JMB) that Pakistani gunsmiths had visited the district of Malda to train local gunsmiths in the production of AK-22 sub-machine guns. The gunsmiths who received assistance were from Munger in Bihar, a region notorious for the widespread production of locally made single-shot ‘katta’ pistols, supplemented by relatively sophisticated self-loading handguns in more recent years. Officials suspect that the Pakistani gunsmiths who visited were  from Darra Adam Khel in the Northwest Frontier Province, famed for its production of high quality copies of military small arms.

During the attack on Holey Artisan Bakery and O’ Kitchen restaurant, two police officials were killed by improvised grenades. 20 hostages, including 18 foreigners, were found dead in the cafe after Special Forces finally entered. A video released following the attack shows the perpetrators in front of an Islamic State flag, each armed with an AK-22.