This post accompanies the twentieth in a series of collaborative videos produced with ARES Researcher Ian McCollum, who also runs the Forgotten Weapons blog and YouTube channel. Using access to unique collections facilitated by ARES, this series of videos will examine a range of interesting weapons over the coming months. Each video will be accompanied by a blog post, here on The Hoplite, and supported by high quality reference photographs. – Ed.

‘The Thorneycroft rifle is one of the world’s first ‘bullpup’ rifles, predating the term itself (which first appeared in print in 1940) by several decades and the current crop of military bullpup firearms by several more. Although named for industrialist James Baird Thorneycroft, the lion’s share of the actual design and development work would have fallen to Moubray Gore Farquhar, of Farquhar-Hill automatic rifle fame. Thorneycroft’s involvement was probably limited to finance and promotion. This was a truly British effort, Thorneycroft being an Englishman living in Scotland, and Farquhar a native Scot who had relocated to Birmingham to pursue his career. Unlike Thorneycroft, Farquhar was a military man and had served as an officer in Thorneycroft’s brother’s Mounted Infantry unit in South Africa. This is an important, if poorly documented connection with the rifle at hand, because the Thorneycroft was fundamentally an arm intended for mounted soldiers and cavalry. Although ill-timed in terms of the military needs of the day, the basic concept that it embodied would eventually gain widespread acceptance and remains in use today.
The Rifle
The British combat experience in the Second Boer War led to a modernisation programme for the service Lee rifle. At the same time, a much more radical response was being developed. Whereas the Short Magazine Lee-Enfield (SMLE) was conceived as a universal short rifle, Farquhar and Thorneycroft intended their scratch-designed equivalent to be ‘…more suitable for use by mounted troops’ (from the patent). Mounted Infantry were an important unit type for British colonial warfare, able to quickly get to where they were needed, dismount, and fight as conventional riflemen. Even more so than regular troops, they had a need for a compact and lightweight yet long-ranged personal weapon. Although they did not typically fight from the saddle, handling the 1902 rifle strongly suggests that one-handed firing may have been a secondary purpose – or at least a happy fringe benefit – of the unusual layout and rearward point of balance. As with a modern bullpup it is possible to roughly aim the weapon whilst it is braced against the shoulder with only one hand on the stock.

If the designers converted any existing rifles to prove their concept, none survive today. The ten Thorneycroft rifles in the National Firearms Centre collection are all scratch-built. Several are marked with their designation (‘Thorneycroft Pattern Rifle, Model 1902’ etc). As military requirements demanded, all (bar one, the Model 1907) are chambered for the standard .303 service cartridge and are fitted with bayonet lugs. The example pictured above also has dial sights fitted, no doubt another attempt to please the British military establishment.

‘As in the use of the improved rifle the distance from the shoulder to the trigger should remain as in ordinary rifles, the trigger is placed forward of the magazine, and connection between the trigger and the firing mechanism is made by providing a connecting rod or lever…’ 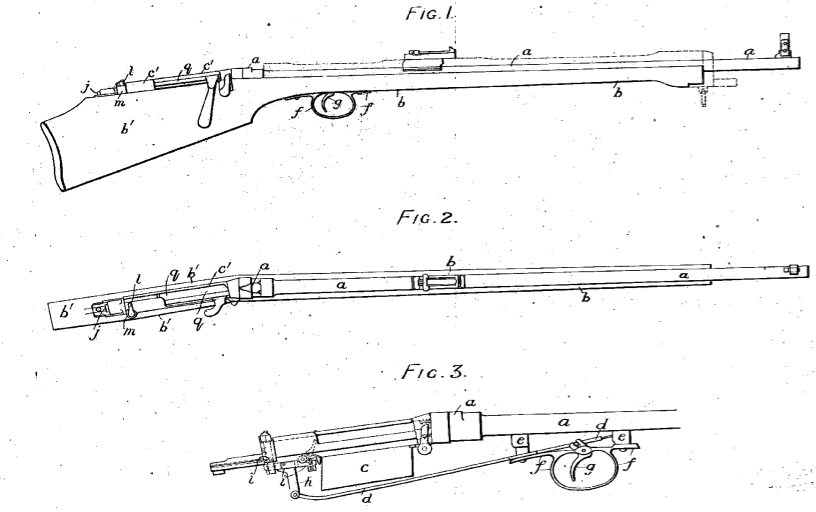 Military Trials
The Thorneycroft was never formally trialled as a serious candidate to replace the service Lee. By the time it came to the attention of the Small Arms Committee, development of the Short Magazine Lee-Enfield (SMLE) was well advanced. However, it was subject to several informal trials between 1902 and 1903, conducted by NCOs of the School of Musketry at the Hythe in Kent, England. The new weapon went head-to-head with the SMLE in realistic combat-style tests including falling and moving targets at 200 yards. The Commandant at Hythe commented that the rifle was ’light and handles well’, and was impressed by the bullpup concept, but otherwise impressions were not very favourable throughout the trials. Excessive recoil, a defective charger design, consistent failures to extract, failures to eject, double-feeds and misfires plagued the design. It was found to be slower to load and fire than the SMLE and was for the most part less accurate. One test compared the two rifles in terms of the number of accurate shots fired in one minute under the same range conditions (so no, not the mythical ‘mad minute’). The SMLE managed an average of 24.5 rounds fired with one stoppage – the only one experienced in all three trial – whereas the Thorneycroft achieved only 15.5 rounds, with four stoppages and a lower accuracy score to boot. This may be a function of the heavy and inconsistent trigger pull which came in for specific criticism. This latter point, of course, will not surprise detractors of today’s bullpup weapons.

The Model 1906
In October 1903,Thorneycroft requested feedback on the failed trial, which was declined. He was also denied a supply of SMLE barrels to build improved rifles. Undeterred, he submitted a final attempt in 1905 which was politely but firmly dismissed with a single sentence: ‘The Committee inspected the rifle and ask that Mr Farquhar be thanked for exhibiting it.’

Thorneycroft and Farquhar should probably have taken the hint at this point. Instead they kept at it, and the less radical Model 1906 illustrated here (museum no. PR.10280) was the result. Together with the final Model 1907, it represents the more-or-less fully developed form of the weapon. It is less of a bullpup than the original Model 1902 ‘inclined bolt’ version, which was intended to bring the sights up to eye level, instead featuring a trigger located substantially further to the rear in order to approximate the length of pull of a Lee-Enfield. However, like the earlier design it lacks a conventional stock wrist or semi-pistol grip. Instead, only the front lower portion of the stock is shaped for the firing hand, leaving no accommodation for the thumb; an arrangement not unlike a US California-legal rifle stock. This made for substantial felt recoil and muzzle rise, something that had been picked up in military trials of the Model 1902: ‘The recoil is greater than that of the Shortened Enfield Modified Rifle. The blow given by the cheek-piece to the cheek-bone at short distances, and to the jaw-bone at long ranges is very severe’.

Many of the original unique features were dropped for the Model 1906 in favour of more conventional Mauser-like equivalents, including a large straight bolt handle, front bolt lugs and a cock-on-open (although not on rotation) bolt. The rifle is hammer rather than striker-fired, the hammer being located directly behind the magazine and acting on the rear of the firing pin by means of a corresponding slot cut on the underside of the bolt. There is a roller on the upper edge of the hammer to act as a bearing for the bolt, presumably in an effort to smooth cycling.

Importantly for actual practical military service, a safety lever was provided on top of the weapon, acting forwards for fire, backwards for safe. This does not act internally, but instead engages with a steel pin on the underside of the bolt handle, such that when the latter is in the vertical position, a slot on the safety lever engages with the pin and prevents the bolt from being rotated into the fully locked position. This has the effect of making the trigger safe, and also locks the bolt in a convenient storage position for carriage in a cavalry-style ‘boot’ (scabbard). To make ready, the safety is pushed forward and the bolt turned down, engaging trigger and sear and fully chambering the cartridge. The ejector is of plunger type and is, on 100-year-old surviving examples at any rate, very weak. One notable feature given modern complaints over ‘rimlock’ or ‘rim-jam’ issues with rimmed .303 cartridges is the Thorneycroft’s magazine, designed with a follower acting on an angle that places each rim positively one in front of the other. This was made possible by the space made available at the rear of the stock (normally the trigger mechanism would have to engage with the bolt and so would be in the way). However, this may have been an unintended consequence, since the front lower portion of the stock had to be cut at an angle in order to give the shooter something to grasp, creating a raked magazine design by default. Testing with drill rounds shows that rimlock is indeed impossible to induce with this system (although this example is incorrectly headspaced and will not chamber a drill round). 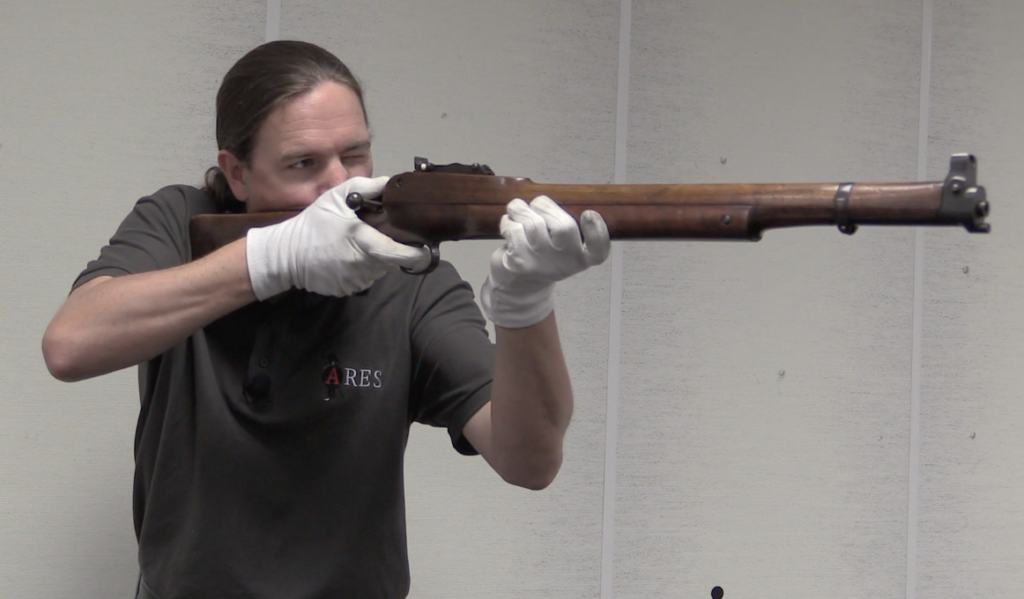 As for sights, various different patterns were fitted to this series of rifles, including an unknown pattern of optical sight on the Model 1902 that is now lost. In contrast to the design philosophy of the SMLE, the tangent aperture type, as found on this model, seems to have been preferred. The rear aperture is drilled into a large rectangular vertical flat plate that is adjustable for elevation. Overall, it is fair to say that the 1906 design had been watered down in an attempt to meet market expectations. This met with limited success. The Cavalry Journal of 1906 (Vol.1, p.224-225) remarked that it was ‘…strong and handy…lighter, better balanced, and has a longer bayonet reach’. It praised the inclusion of front locking lugs and, completely counter to the official trials, claimed that the Thorneycroft could be ‘loaded more rapidly’. By 1907 it was clear that the British government had no interest in any Thorneycroft design, no matter how compromised. No other potential user seems to have expressed an interest, although intriguingly, the last known Thorneycroft rifle, dated 1907, is chambered in 7 x 57 mm Mauser.

Legacy
The Thorneycroft was a failure; a true ‘forgotten weapon’. But it is interesting that the original rationale for the invention of the bullpup is also the reason that we still have the current generation of bullpup rifles on sale and in service today. These too were created to arm mobile infantry; this time operating from Cold War vintage armoured vehicles and helicopters rather than horses. Despite its failure, the Thorneycroft still has a legacy. Bullpup rifles may be out of fashion in some quarters, but they remain in military, police, and sporting use worldwide. Whereas the debate over their merits relative to the conventional layout continues, modern proponents would no doubt agree with the Commandant of the School of Musketry, who remarked in 1903 that ‘…the principle of curtailing the length of the rifle whilst securing the full length of barrel has much to recommend it.’