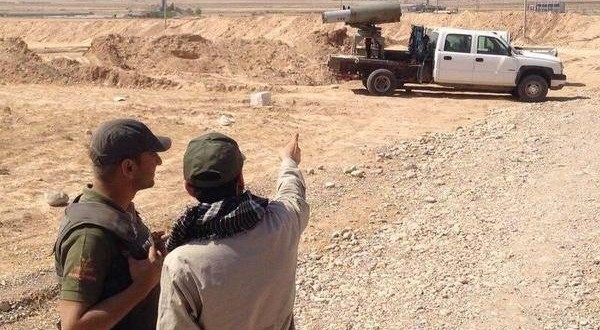 Falaq-2 based IRAM in Iraq

By Michael Smallwood. Header image displays an improvised launcher in a two-tube configuration mounted on the rear of a pickup truck.

Photos emerging from Iraq purport to show members of the Islamist militant group Asa’ib Ahl al-Haq (AAH) in possession of 333 mm Falaq-2 artillery rockets and improvised launchers. In the photo below, a substantially larger payload has been affixed to the forward portion of the rocket, in what is known as an ‘improvised rocket-assisted mortar’ (IRAM) – more accurately described as an improvised rocket-assisted munition. It is unclear whether this replaces or is in addition to the standard 117 kg high-explosive (HE) warhead that the Falaq-2 possesses. The maximum range of the Falaq-2 is 10.8 km, though this is sure to be reduced dramatically by the addition of such a large improvised warhead.

Special thanks to Eliot Higgins. Photos taken from a since-deleted source. Location and group affiliation should be considered unconfirmed at time of publishing. Technical characteristics from ARES Research Report 2.