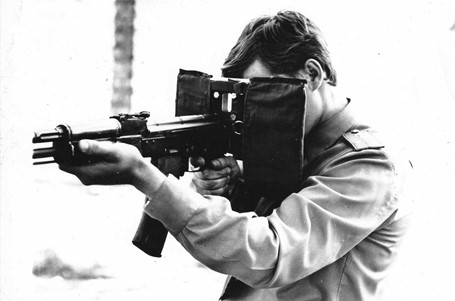 Editor’s note: This is the second part of Mr. Senft’s research article examining the military use of ballistic shields. Part 1, covering the period ca. 1500–1918, can be found here.

During the interbellum period, ballistic shields returned to being something of a novelty. Experimentation continued, with some military units and even police forces testing the application of First World War-inspired ballistic armour and shields in their domestic contexts (see Figure 2.1). These did not catch on. Whereas the largely fixed-line trench warfare of the First World War had necessitated fortifications and created a natural demand for mobile and semi-mobile shields, the Second World War was characterised by a ubiquity of armoured vehicles and so a proportional ubiquity of weapons to defeat armour. In contrast to World War One, World War Two was also fought far more dynamically and so rarely offered suitable circumstances for the employment of man-portable ballistic shields. As a result, few shields were designed or fielded during World War Two and even fewer appear to have been employed successfully (Gilbert et al., 2012).

As shields for soldiers are best employed in static, siege-like battles—and wars dominated by such battles have rarely been fought since the conclusion of the First World War—their use in more recent decades has been limited. Nonetheless, there are few instances when ballistic shields have been trialled or employed.

Soviet Occupation of Afghanistan
During the Soviet occupation of Afghanistan, the ratio of soldiers killed by small arms fire compared to those killed by artillery fire was drastically higher than during the Second World War. As a result, a program to better protect Soviet soldiers from small arms fire by affixing shields to all kinds of infantry weapons was initiated. These shields consisted of plates made from titanium or steel, with an anti-spalling coating, which were attached to the rifles via a frame and fabric pouches (see Figure 2.2). During trials at the Rzhevka testing site, it was determined that the shields had significant negative impacts on accuracy, target-to-target transition speed, and situational awareness. Even though the shields would most likely have been effective at stopping contemporary small arms bullets at reasonable distances, the drawbacks were judged too high and the concept was abandoned (Ozeretskovsky, Gumanenko & Boyarintsev, 2006; Gearguide, 2020).

Ballistic shields in contemporary usage are primarily encountered in service with law enforcement agencies. In this context, the drawbacks of employing a shield are far less significant than in open warfare. Firefights involving police officers are usually far shorter in duration than a battle; typically occur without the need for a prolonged march beforehand; do not generally involve armour-piercing ammunition; and are frequently a unidirectional affair, with officers often knowing the direction of a ballistic threat (and sometimes even the make, model, and calibre of the weapon(s) in question) and being at a greatly reduced risk of being outflanked by adversaries. The use of shields in typical law enforcement scenarios—such as advancing down a hallway towards a barricaded suspect—can significantly increase their usefulness in protecting a column, or ‘stack’, of officers with minimal impact from the key drawbacks of weight and reduced mobility. Both portable shields (carried by an individual) and push shields (supported by wheels and pushed by an individual operator) are employed by law enforcement units around the world (see Figure 2.3).

Combat operations ‘among the people’ have become an increasingly dominant characteristic of modern warfare and military and police operations may overlap when combatting terrorism or modern drug cartels, for example (Smith, 2005). Thus, military and paramilitary forces occasionally encounter specific tactical situations in which a ballistic shield may be advantageous. Consequently, some nations’ special operations forces—most notably the various Spetsnaz groups of the former Soviet Union and Russia—are issued portable ballistic shields for specific missions, such as urban assault operations conducted against buildings, planes, or trains. Of course, such missions do not necessarily turn out to be as clear-cut as expected—especially in a military context. A bigger area might have to be cleared to complete the mission or a prolonged firefight might ensue. And, once conditions change, a shield may turn from a protective asset into a dangerous burden. Therefore, the question of whether to issue shields to a nation’s soldiers (even only to a select few) or not, becomes a matter of doctrine and preference. Russian forces such as various Federal Security Service, Special Operations, and Special Rapid Response units are regularly issued with heavy protective equipment, including shields (Prizraki, 2019). Among the most modern is the Veer-6, which is reported to consist of ceramic plates and Aramid synthetic fibres and covers an area of 0.6 m2 at a weight of 55 lbs (25 kg) It has a protective capability comparable to NIJ level IV (Viking, 2013) (see Figure 2.4).

In contrast, shields of a similar size, weight, and protective capability remain commercially available to American military forces, but none appear to be issued in any significant numbers—despite such shields remaining popular with American police forces. U.S. Marine Corps Fleet Anti-terrorism Security Team (FAST) units and military police units responsible for base security—i.e. units trained much like civilian law enforcement’s tactical response teams, particularly the military’s Special Reaction Teams (SRTs)—do make use of ballistic shields on occasion, but they remain a specialised piece of equipment within the U.S. armed forces (ASO, 2020).

One notable innovation to overcome the trichotomy of portable, set, or push shields is the use of an over-the-shoulder suspension method. U.S. firm Advanced Accuracy Solutions offers a support structure—called ‘The Reaper’— which consists of an overhead arm which is attached via a padded belt to the wearers’ upper hips. A shield can then be suspended from the overhead arm. This takes most of the shield’s weight off the user’s arm and, so, offers increased endurance of the user as well as a more stable shooting platform (Baker Ballistics, 2019; AAS, 2017). However, such a design is likely to introduce a different set of mobility complications than a user is familiar with, necessitating specialised training. The Reaper suspension system was tested by the Australian Army in 2016 for use with various portable machine guns in service, but was rejected (Trevithick, 2019) (see Figure 2.5).

Small weapon-mounted shields which are purpose-built for military operations have also been developed in the U.S. Notable examples include the S.L.A. Marshall Weapon’s Shield and the AJAX Armor System. The S.L.A. Marshall (SLAM) Weapons Shield, named after the U.S. Army historian of the Second World War S.L.A. Marshall. This device was designed and manufactured by Simula Safety Systems International, and consists of a simple plate fitted around the barrel of the weapon (see Figure 2.6, left) (Combat Reform, 2010). As with the Soviet prototypes of the 1980s, this is likely to introduce a number of issues related to speed, mobility, accuracy, and fatigue. As the plate of the SLAM Weapons Shield mounts so close to the muzzle of the weapon, it is in fact likely to introduce further issues of this sort. A more refined product is the AJAX Armor System—manufactured by Tactical Revolution LLC—which was presented at the Special Operations Forces Industry Conference (SOFIC) in 2015 (see Figure 2.6, right). It consists of two armour plates that are intended to be attached via Picatinny rails at the three and nine o’clock positions of a weapon’s fore-end. This device is primarily intended to be used in the prone position, and thus described as most useful for machine guns and precision rifles. The plates are rated to NIJ Level III or higher and weigh 4—4.5 lbs (1.8—2 kg) per side, making the up-armoured weapon more suitable for fixed firing positions rather than mobile fighting (Tactical Revolution, n.d.). Neither product has enjoyed commercial success.

To want to shield a nation’s soldiers from harm during combat is a rational and potentially war-winning desire. However, protection alone does not increase a soldier’s impact on the outcome of a battle. Mobility and agility are also necessary. Thus, the benefits of personal body armour may only outweigh their drawbacks in specific circumstances—in the case of ballistic shields, these circumstances occurred regularly in the middle ages but have become rare indeed. A shield inherently protects the soldier only from the direction it is facing and, can substantially weigh a soldier down, and will reduce situational awareness. Consequently, combat engagements offer favourable conditions for the employment of shields only when the soldier is not forced to carry the shield for a prolonged time and when it is known where the threat is coming from. This set of circumstances, obviously, occurs regularly in armed confrontations between criminals and the police. Where enemies outnumber friendly forces, are concealed amongst the civilian populator, or are highly agile and able to readily execute flanking manoeuvres, ballistic shields may not be appropriate. Whilst new technologies, such as lighter-weight or transparent materials, may change this balance somewhat, it seems likely that ballistic shields will remain a specialist item for the armed forces of the world.

Smith, R. 2005. The Utility of Force: The Art of War in the Modern World. London: Penguin Books.

Trevithick, Joseph. 2019. ‘This Crazy Contraption Was Supposed To Help Aussie Troops Carry Their Guns. It Did The Opposite’. The Warzone. 15 March. <https://www.thedrive.com/the-war-zone/26973/this-crazy-contraption-was-supposed-to-help-aussie-troops-carry-their-guns-it-did-the-opposite>.

2 thoughts on “Military use of Ballistic Shields: Part 2, 1919–present day”