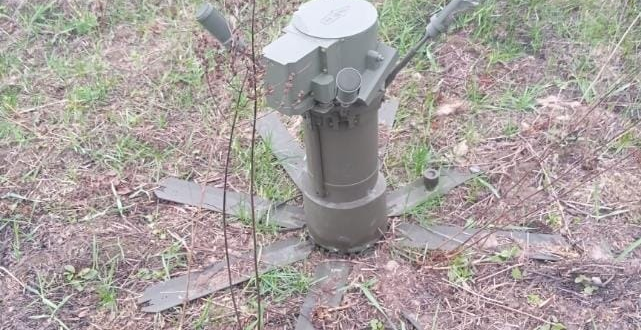 Images shared to social media indicate that the Russian PTKM-1R (ПТКМ-1Р) top-attack anti-vehicle landmine was recently employed in Ukraine. This munition is not known to have been previously employed on operations. It was shown for the first time outside Russia by Rosoboronexport JSC in November and December last year, when it was displayed at the Egyptian Defence Expo (EDEX) 2021. The PTKM-1R is distinct from conventional anti-vehicle mines in its ability to attack the top of an armoured vehicle. The top of a tank or other armoured fighting vehicle (AFV) is typically fitted with thinner armour than its front or sides—hence the top is almost always the most vulnerable aspect of an armoured vehicle.

The PTKM-1R is a high-explosive (HE), top-attack, shaped-charge, anti-vehicle landmine. The PTKM-1R system functions by detecting and tracking a target. Once a target has been identified, a submunition is launched into the air toward the target, functioning so that it attacks the vehicle’s roof. The system consists of a combined transporter-launcher and an offensive element (submunition). So far, the mine can only be emplaced manually, but the manufacturer plans to utilise other delivery methods in the future. The PTKM-1R is similar in many respects to the American M93 Hornet Wide Area Munition, which is presented for comparison in the latter part of this article.

The PTKM-1R’s transporter-launcher is equipped with acoustic and seismic sensors that detect a target by the sound it makes and the ground vibrations it induces. The target is identified by comparing a target’s acoustic and seismic signature with an internal database. The two sets of sensors allow the mine to detect a target vehicle at a distance of 100 metres. Once the target is within 50 metres (and not closer than 5 meters), the necessary flight path of the warhead is calculated. Next, the unit is tilted towards the target and the submunition launched. The submunition is projected to approximately 30 m above the ground. Using infrared and radar sensors, the submunition scans the ground and, once it is over the target, engages it.

The manufacturer does not state so explicitly, but from videos of the submunition it is apparent that the submunition employs an explosively formed penetrator (EFP) to engage the target. This is clear from diagrams showing the internal construction of the warhead (see Figure 1.3). An EFP is a metal slug that is formed and accelerated towards a target by an explosion. The PTKM-1R’s EFP is reported to be able to defeat up to 70 mm of armour.

It should be noted that, theoretically, the PTKM-1R mine could detect a target approaching from any direction—it has four acoustic sensors that would allow the mine to determine the location and travel direction of an incoming target 360° around it. However, the PTKM-1R mine is clearly marked with an arrow reading “towards target” (see Figure 1.4). This marking indicates that the PTKM-1R can only engage a target within a killing envelope—the angle of which remains unknown. This limitation is probably mechanical, in that the mine cannot rotate on its ‘foot’ but only tilt towards a target.

The PTKM-1R system has been hailed as a novel anti-tank mine in recent years. However, it is by no means revolutionary. In fact, the PTKM-1R is very similar to the American-developed M93 Hornet Wide Area Munition (see Figure 2.1). The two mines are so similar that it is reasonable to apply some understanding of the M93 to the Russian munition—supplementing the limited publicly available information on the PTKM-1R.

The M93 Hornet was developed by Textron Systems (formerly known as Textron Defense Systems) in the late 1980s. Its developments occurred against the strategic backdrop of the ‘Assault Breaker’ concept. This concept originated in the 1970s when NATO forces faced off against the Warsaw Pact, which enjoyed significant numerical superiority in armour, across strategic corridors such as the Fulda Gap. In 1975, for example, NATO forces had 6,100 tanks at their disposal in Central Europe. By comparison, the Warsaw Pact had some 19,000 tanks available—a numerical advantage of around 3 to 1. The Assault Breaker concept envisioned compensating for this numerical disadvantage, in part, by using high-technology standoff weapons. Following the fall of the Soviet Union in 1991, the threat to Western Europe posed by large armoured formations diminished. This, combined with the M93 Hornet’s high unit price of $119,190 (in 1996), made it unattractive, and the program was terminated in 1997. At that time, the munition was in low-rate serial production—with a total production volume of only 441 units. Attempts to export the M93 Hornet to Israel and the UK were unsuccessful.

Like the PTKM-1R, the Hornet was designed as ‘smart’ munition, an autonomous top-attack anti-vehicle munition. This means that it could detect and destroy hostile armoured resources by launching a submunition into the air that targets the roof of the vehicle. However, unlike the PTKM-1R, the M93 Hornet would not autonomously engage a target; instead, the mine was operated by the M73 remote control unit to receive firing confirmation from a human operator. Like the PTKM-1R, the M93 Hornet’s transporter-launcher used different types of sensors to detect and engage a target: seismic, acoustic, and infrared. Both mines are also similar in weight and range. The Hornet weighs 15.9 kg, compared to 19.9 kg for the PTKM-1R. The Hornet’s acoustic sensors have a range of around 100 meters (109 yards), the same as the state range of those of the PTKM-1R.

The M93 Hornet’s submunition also contained a warhead that utilised an EFP. The Hornet’s warhead was based on the Textron Systems’ SKEET submunition, used in cluster munitions. For example, four SKEET warheads were contained within a BLU-108/B submunition, ten of which could be dispensed from a CBU-97 dispenser. The SKEET used a copper-tantalum alloy to form the penetrator. This choice of metal is significant, as forming an EFP is based on the Misznay-Schardin effect. This effect describes the phenomenon of certain metals (e.g., copper) and alloys being explosively formed into ultra-high-speed masses that are capable of penetrating thick armour.

Translating explosive energy into a fast-moving EFP depends substantially on the geometry of the shaped charge and the composition of the metal liner. The M93 Hornet’s warhead uses 945g of explosives to penetrate up to 90 mm of armour. On the other hand, the PTKM-1R’s warhead contains 2.8 kg of explosives but can only penetrate 70 mm of armour. Given that the PTKM-1R’s warhead contains three times the explosive mass as the M93 Hornet, a similar armour piercing capability could be expected.

The United States has recently published a call for proposals seeking an “anti-tank mine capable of automatically detecting enemy vehicles and firing submunitions at the top of the vehicle”. Apparently, both the U.S. and the Russian defence ministries consider a top attack anti-vehicle mine necessary for their military forces. In the case of the American military, such a mine is likely to form part of the ‘Shaping the Battlefield’ doctrine. This concept employs obstacles—such as a top-attack mine—to shape the territory on which ground operations take place. Thus, a smart anti-vehicle mine would aid in denying an area to an enemy while providing friendly forces with freedom of manoeuvre.

The U.S. call for proposals specifically stipulates that the system should be more potent than the M93 Hornet. Additionally, the new mine should also be linked to a “Remote Control Station (RCS)”. Such a feature would reduce the risk of the mine accidentally targeting friendly forces or bystanders, but—perhaps more significantly—a networked, monitored mine could be left in place for much longer. The announcement requires that “emplaced systems shall be capable of operating in a standby mode for up to six months with the ability to transition to a pre-armed mode for 30 days”. Therefore, such a system could deny an area to an enemy for an extended period of time. Compared to a non-networked mine (such as the current iteration of the PTKM-1R), a networked mine would be a significantly more capable weapon system, as it would not be required to self-destruct. Plans to network the PTKM-1R mine have also been announced.

The PTKM-1R and the M93 Hornet represent a high-technology approach to anti-vehicle landmines. While the M93 Hornet did not turn out to be a commercial success, the fate of the PTKM-1R is as yet unknown. The PTKM-1R probably uses a less effective warhead than the M93 Hornet, but is likely to be significantly less expensive. Thus, the high cost that rendered the M93 Hornet not commercially viable may not be an obstacle for the PTKM-1R. Simultaneously, that the U.S. Department of Defense is seeking a similar mine system shows the demand for a modernised, networked version of this sort of top-attack anti-vehicle mine. Demand for similar munitions may also increase elsewhere in the world. If the PTKM-1R can be produced at an affordable cost and it can be remotely controlled, the Russian top attack anti-tank mine may be a commercial success.

The author would like to express his gratitude to Volker Senft for his invaluable help in assessing the capabilities of the PTKM-1R mine’s sensors. Thanks to Neil Gibson for bringing the use of the munition in Ukraine to the author’s attention.

Tomes, Robert. 2014. ‘The Cold War Offset Strategy: Assault Breaker and the Beginning of the RSTA Revolution’. War on the Rocks. 20 November. <https://warontherocks.com/2014/11/the-cold-war-offset-strategy-assault-breaker-and-the-beginning-of-the-rsta-revolution/>.

Trevithick, Joseph. 2021. ‘The Army Wants Networked Mines that Leap up to Attack the Tops of Tanks’. The Drive. 6 April. <https://www.thedrive.com/the-war-zone/40080/the-army-wants-networked-mines-that-leap-up-to-attack-the-tops-of-tanks>.