The Working Paper Following The Headstamp Trail: An Assessment of Small-calibre Ammunition Documented in Syria analyzes 70 different small-calibre cartridge headstamps (ammunition identification markings) documented in Syria. The assessment is based on photos of cartridge headstamps, cartridges, and ammunition packaging, as well as contextual information such as weapons systems and combatants observed with the ammunition. Information and photographs were collected from both government and rebel forces, during a one-year period until May 2013. This baseline will provide a useful first step for future work in documenting ammunition in Syria and the broader region.

As well as analysis of cartridges and related material documented in Syria, the report contains information to assist with the correct identification of Syrian produced ammunition. For example:

It appears that at least some Syrian 9 × 18 mm Makarov cartridges which were produced by Établissement Industriel de la Défense (EID) in Damascus are marked with the Arabic characters for ‘9 × 17’ (١٧ x ٩). This has led to some confusion, with these cartridges having been described variously as 9 x 18 and 9 x 17 (.380 ACP). Measurements of the cartridge case by several small arms ammunition specialists, as well as anecdotal evidence on the use of the cartridges with PM pistols and copies, chambered for 9 x 18, suggests that the case length (’17’) marked on these headstamps is incorrect. It is not known whether this was an intentional decision by EID, or an error on their part. Examples of cartridges marked in this way are known to exist from 1981, 1984, and 1987. 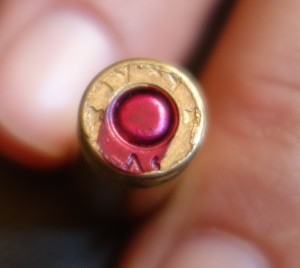 You can read the report in its entirety, here.