The Kucher K-1 sub-machine gun was born in the dark times that followed the Second World War in Hungary. Stalinist ruler Matyas Rákosi went to great lengths to please his Soviet masters and accepted little initiative from within his own country—especially when it came to weapons that rivalled the glorious Soviet designs that had won the Great Patriotic War. So how did the development and manufacture of a sacrilegious domestically designed weapon become a reality in these times? The answer can only be found by examining the biography of its creator, József Kucher, and the heritage of the design itself.

In the late 1940s and early 50s, the Soviet Union pushed hard to standardise Eastern Bloc weaponry. Besides logistic considerations it was in the financial interest of the Soviets to impose their designs on Eastern European countries under their influence; in many cases, these intellectual properties had to be licensed from the USSR in order to be built in the re-emerging factories devastated by the recent war. Local initiatives, such as the Czechoslovak 7.62 × 45 mm M 52 cartridge, soon crumbled and vanished under Soviet pressures.

The Hungarian armed forces were already struggling with a significant deficit of firearms in the late 1940s, but were largely unable to adopt local designs. In fact, the Rakosi regime encouraged every segment of public life to copy the Soviet Union wherever possible. As a result, licenses for the Mosin-Nagant rifle family, the Tokarev pistol, and other designs were purchased and entered local production to equip the Hungarian armed forces. Unsurprisingly this package included the PPSh-41 sub-machine gun, and local production of this firearm began in 1950 at Fémáru Fegyver és Gépgyár (FÉG).

This political atmosphere left little room for innovation within Hungary. Indeed, the Haditechnika Intezet (‘Institute of Military Technology’), responsible for developing new weapons designs, received explicit instructions as early as 1949 that research and development of domestic weapons was only permitted if the weapon exceeded the abilities of weapons of foreign (Soviet) origin, or could not be imported or otherwise obtained (e.g. via licensing).

Our story would end here, if not for a key figure in Hungarian firearms design. Joszef Kucher had been working day and night at the Institute of Military Technology to resolve the challenges faced by the Hungarian firearms industry in the face of the mandated adoption of soviet designs. Kucher was not new to putting out programmatic fires, and he applied his high level of training in the fields of engineering, firearms technology, and project management to great effect. He had been involved in the design and production of firearms since 1936, working in the Danuvia weapons plant. He quickly became Pál Király’s congenial partner. While Király—with his international career that started with the SIG MKMO and ended with the Kiraly-Cristóbal Carbine—seemed to be the flashy star of Hungarian weapons design, and the man after whom all the domestically manufactured sub-machine guns produced in Hungary during the second world war were named, Kucher worked diligently in the background. In fact, he contributed at least equally to successful designs such as the Király-géppisztoly 1939M, 1943M and 1944M. Now, with Király living abroad and Kucher at the centre of potential new developments, it seemed his time had come.

After examining the PPSh-41, Kucher came to the same conclusion as Sudayev a couple of years earlier: whilst it was easy to manufacture and a robust design, it was hampered by an unreliable magazine and was too long and cumbersome for mechanised or other specialised personnel, who needed an even more compact weapon with a foldable stock. Kucher envisaged a domestic Hungarian alternative to the PPSh-41. He was given the green light for his project in 1949, but was forced to work within a strict set of parameters. Key amongst these: the weapon must be chambered for the 7.62 × 25 mm Tokarev pistol cartridge round and it must be of a compact design that would suit the needs of armoured fighting vehicle personnel and junior to mid-level troop commanders.

The fundamental design phase had started a year earlier in 1948, although it is highly likely that Kucher used ideas he already had developed during the Danuvia 1944M project, that weapon never having entered serial production. During the summer of 1949, the first 30 prototype guns were delivered, and field trials commenced immediately. They concluded in the winter of 1949, and Kucher presented his improved design—based on the lessons learned— to representatives of the general staff on 21 December. A second trial was approved, and 25 firearms of the improved design were produced. At the conclusion of this second trial, in November 1950, the Institute of Military Technology recommended the weapon to be officially fielded within the Hungarian armed forces. The weapon was officially adopted as the K-I könnyû géppisztoly (‘K-1 light sub-machine gun’) on 11 November 1951. 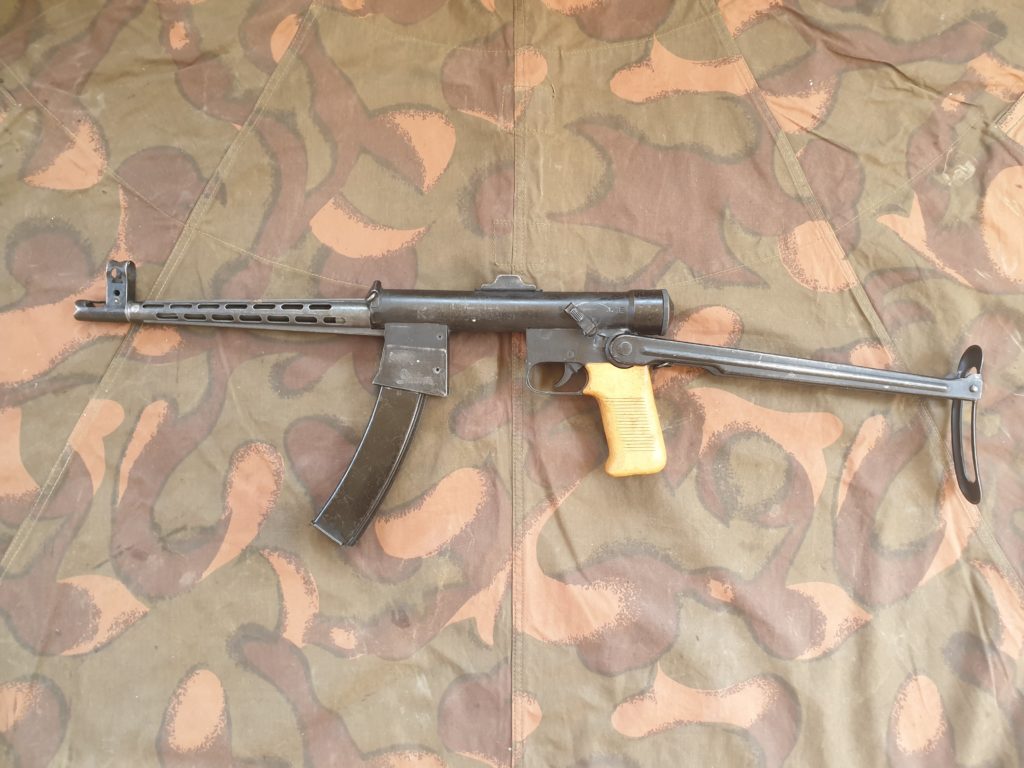 The commencement date of serial production and the total number of weapons made are still the subject of ongoing research. It is generally agreed that serial production commenced no later than 1953. This is supported by the Hungarian designation ‘53M’ that appears in some documents, despite the official adoption of the weapon in 1951. Interestingly, the manual published in 1955 does not use the 53M designation, leading some observers to suggest the weapon did not enter production in 1953. Nevertheless, production guns from 1954 with serial numbers in the 4,000-range (DA 4755) up to those produced in 1955 with serials in the high-9,000 range (DB 9883) have been documented. This suggests a potential yearly production of around 4,000 firearms, but this cannot be confirmed. It has to be understood that K-1 production, even at the maximum estimate above, was of remarkably limited volume compared to domestic production of the PPSh-41, which began in March 1950 and reached 13,971 pieces in just 10 months.

The Kucher K-1 is a simple blowback weapon firing from an open bolt. It is capable of both semi-automatic and automatic fire. The selector is located on the left-hand side of the trigger housing; this also accepts the hinge that holds the foldable stock. The stock can be folded down and forward making the K-1 a slick and compact firearm. Like some other contemporary designs and rather closely resembling the PPSh-41, the cocking lever doubles as a safety and can lock the bolt either in the forward or rearward (cocked) position via cuts in the receiver. The barrel is surrounded by a perforated jacket; this, like most other parts of the K-1, is made from stamped steel. Another distinctive feature is the muzzle device, which features a sizeable cut-out in the top to compensate for muzzle climb, especially during automatic fire. The front sight has a hood with an opening in the top, that is very similar to the Király 43M design, while the rear sight can be flipped to present notches for 100 m and 200 m engagement ranges. 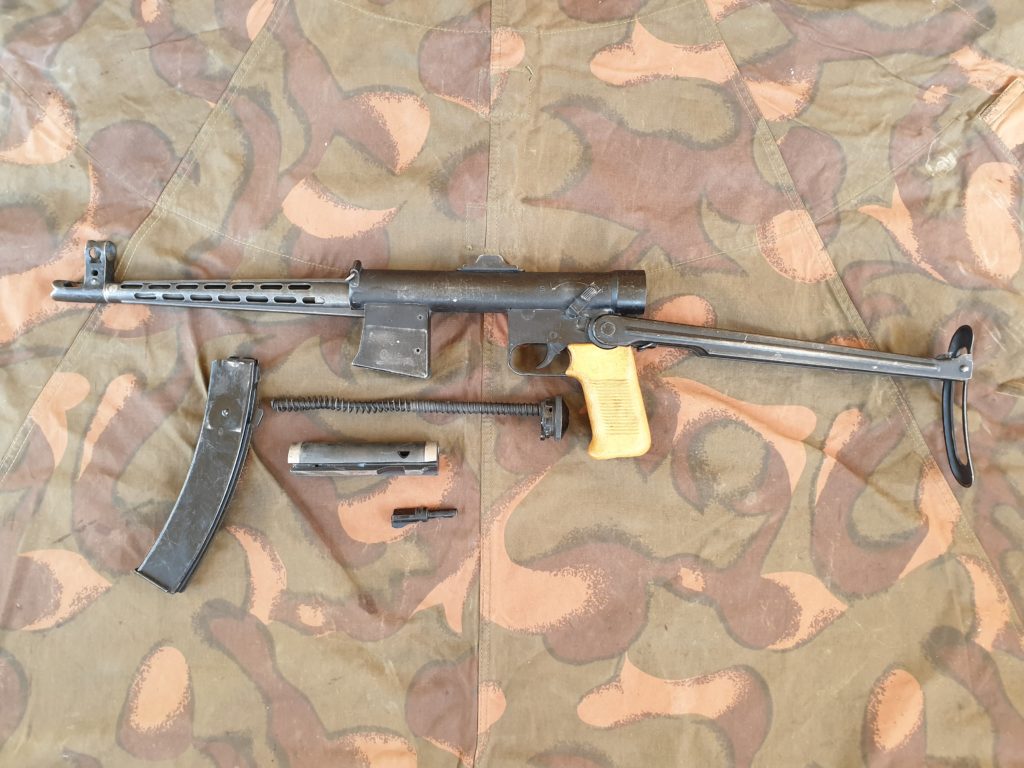 Prior to disassembly, the Kucher K-1 should be unloaded and made safe like any other firearm. The magazine catch is somewhat hidden at the back of the magazine well, ensuring that it is not engaged accidentally. Before disassembly, the fire selector must be placed in the ‘S’ position. With a punch or dowel, depress the spring-loaded button in the end-cap. With the button fully depressed, the cap can be rotated 90 degrees counterclockwise. The operator can then remove the end-cap, buffer, and recoil spring assembly out of the rear of the receiver. The bolt should now be pulled backward, until the charging handle reaches the rear cutout in the receiver. The charging handle can now be removed, and the bolt can be taken out of the receiver through rear. 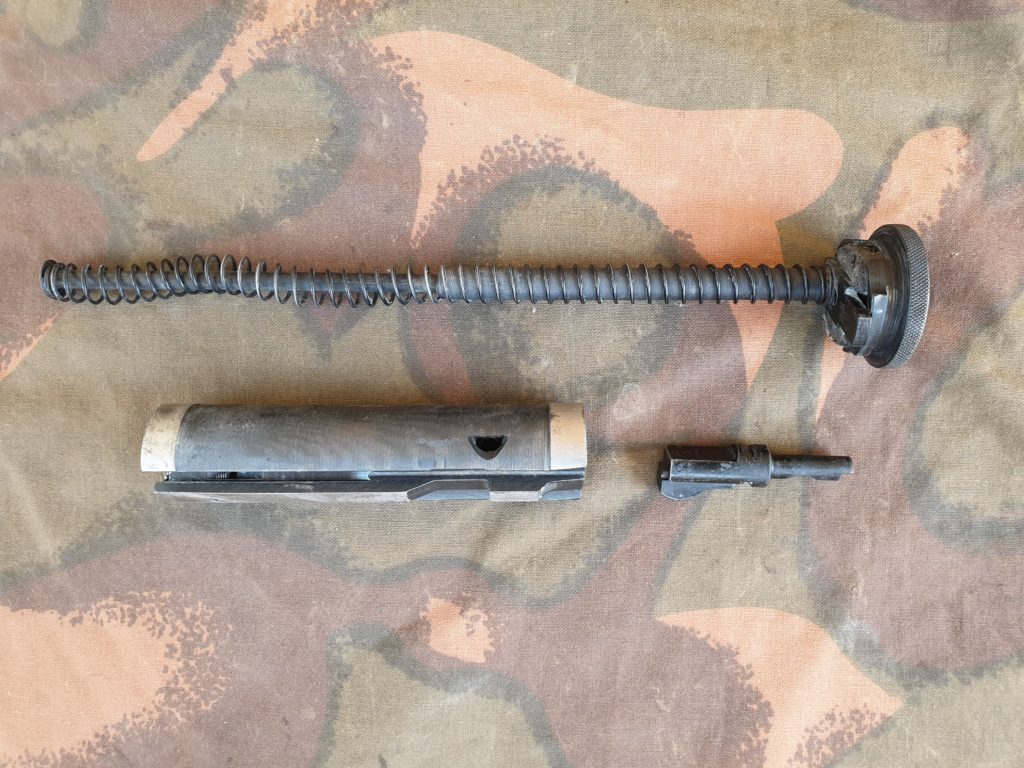 To reassemble the weapon, proceed in the reverse order. Make sure to pull the trigger when inserting the bolt. To install the charging handle, the triangular hole in the bolt must be aligned with the corresponding hole in the receiver to ensure the handle fits through both openings.

The Kucher K-1 was a reliable weapon that performed well. It was easy to produce and used a cartridge that was competitive for the time, with a flat trajectory and a proven track record. Far from being revolutionary compared to competing weapons, it was a solid design developed and put into production in a very short time; it proved more than a match for the PPSh-41. At the same time, the limited fielding of this weapon marked the end of an era in Hungarian firearms history—one that had its roots in the decades before the First World War. József Kucher was the last member of the generation of designers that included Pál Király and Rudolf Frommer. His imprisonment by the communist regime in 1953—based on false claims—was a devastating blow he never fully recovered from. Further Hungarian firearms designs were based on the AK system or were mere continuations of pistol development, and it was not until 1986 when the next locally designed and produced sub-machine gun emerged in the form of the KGP-9. The K-1 saw limited service until the late 1960s and early 1970s within the border and prison guard services and some police units, before being exported as part of security aid packages to various recipients in Africa and the Middle East. The only reliable inventory numbers that could be found were from the Hungarian military stocks. These recorded a total volume of 796 K-1s in the inventory in 1965; that dropped to just 15 by 1970. Notably, however, this number rose again in 1975 to 158, indicating a transfer from other services to military stocks. This also supports claims that the active use of the K-1 in Hungary ended around the early 1970s. It is safe to say that this sub-machine gun was able to stand its ground over the decades and it is still found in modern conflict zones, including Libya, as ARES has previously documented. It has even served as a basis for carefully executed cut-down versions to make it yet more compact, as documented recently in Lebanon (see Figure 1.4).