With a shortage of conventionally produced small arms in Shan State, Eastern Myanmar (formerly known as Burma), craft-produced and locally assembled weapons have proven important to the Shan State Army (SSA). A locally assembled AK-type self-loading rifle, known as the Yat-Thai in the Shan language, is amongst the most common of these. Built from foreign and Burmese rifle components, these rifles are assembled and modified by local craft-producers in the city of Loi Tai Leng—headquarters of the SSA—at the base of the Yat mountain range. the Yat-Thai is used in significant numbers by indigenous Shan fighters.

ARES field interviews with former SSA fighters indicate that production was ongoing until recently, with the earliest examples of the rifles documented in the west in mid-2011. Since then, there have been only occasional sightings of the rifle via open sources, however ARES has tracked numerous examples via confidential sources in Myanmar. To date, little has been published on these weapons and a number of misconceptions have been circulating. ARES field research conducted in late 2018 has allowed for a much more in-depth understanding of the rifle. 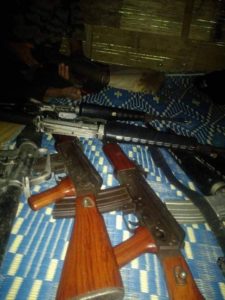 Figure 1.1 Two Yat-Thai rifles amongst a cache of arms allegedly captured from the Arakan Army in the vicinity of Paletwa, in southern Chin State. The sling swivel fitted to the left-hand side of the buttstock is typical (source: Burmese social media via ARES CONMAT Database).

The Yat-Thai rifle solves two of the key issues facing many of the so-called ethnic armed organisations (EAOs) in Burma with regard to their limited ability to capture, purchase, or assemble arms and munitions for use in their ongoing internal conflicts waged against the Myanmar Tatmadaw (armed forces) or other EAOs in the country.

The first is a known issue with Burmese-made 5.56 × 45 mm ammunition and MA-series self-loading rifles. Whilst 5.56 mm ammunition is obtained by the SSA with some frequency, these cartridges do not reliably function with the M16-series rifles also found in the country (these are predominantly in service with Karen National Liberation Army forces, although they are also used by other EAOs). Despite this, Burmese MA-series rifles reliably function with foreign (NATO specification) 5.56 mm ammunition. Additionally, the SSA is equipped with a large number of weapons chambered for other cartridges, especially the 7.62 × 39 mm round. As a result, captured Burmese 5.56 mm ammunition may not always be compatible with the arms held by the SSA—even those chambered for 5.56 mm NATO cartridges. 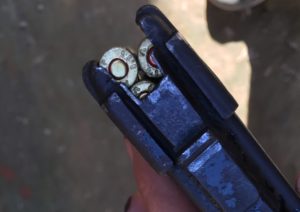 Figure 1.2 A magazine loaded with Burmese DDI 5.56 × 45 mm cartridges as used with a Yat-Thai rifle examined in-theatre. This ammunition has known operating issues when used with M16 rifles (source: ARES). 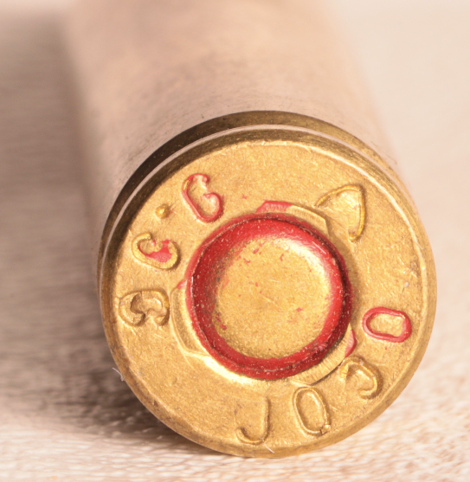 Figure 1.3 The headstamp on a 5.56 × 45 mm cartridge produced by DDI in Burma. Note the red sealant at the primer annulus and the distinctive crimping pattern. The year of production (2010) and calibre (5.56) are marked in Burmese numerals (‘၂၀၁၀’ and ‘၅.၅၆’, respectively), and the headstamp also incorporates the DDI triangle crest. (source: ARES).

Secondly, there is a surplus of small arms that have been rendered unusable or undesirable due to parts breakage, poor maintenance, a lack of reliability, and other issues. Whilst there is 5.56 mm ammunition available, there are not enough suitable rifles available in this calibre. Many of the M16 rifles in theatre are early M16A1 variants, that originate from surplus stocks in Cambodia and elsewhere. These are typically in poor condition, and ARES has documented many that would be unsafe for use. Burmese-made MA-series rifles are not favoured by EAOs as they have a reputation for being unreliable and inaccurate, and are heavy compared to other rifles in use. As a result of their relatively low-quality build standard and the iterative changes within models, there are not enough captured rifles to allow for interchangeable components and spare magazines.

The craft-produced Yat-Thai self-loading rifles are a solution developed to employ otherwise-unusable ammunition and to recycle components of M16 and MA-series rifles, combining these with surplus Kalashnikov-type rifles. A Yat-Thai is comprised of the following components: the ‘base’ rifle is of the AK-type, retaining the receiver, action, gas tube, rear sight block, trunnion, and front sight post. The magazines are typically those of MA-series 5.56 × 45 mm rifles (at least one observed example uses a modified M16 magazine well and corresponding magazine). Barrels are taken from either M16 or MA-series rifles. The wooden furniture (stock, pistol grip, and fore-end) is locally produced and finished. There is considerable variation amongst examples, including both fixed- and folding-stock variants.

Figure 1.4 Right-hand profile view of a typical Yat-Thai rifle. Note the locally-produced wooden buttstock with the pronounced bulge that interfaces the stock with the rear trunnion inside the receiver. Wooden small arms furniture production in the border areas is quite advanced, with local gunsmiths frequently reproducing full-length stocks on a wide range of small arms daring from the Second World War to present day (source: ARES).

Figure 1.5 Left-hand profile view of a typical Yat-Thai rifle. Note the curved pistol grip, sling swivel on left-hand side of buttstock, and lack of an upper handguard (source: ARES).

The production of the Yat-Thai is enabled by a localised culture of gunsmithing that has sprung up around Loi Tai Leng. Local gunsmiths have proven adept at repurposing small arms components and craft-producing wooden furniture and other parts. Similar craft production and assembly takes place in many of the ethnic areas—particularly among the Chin, as Chin State is one of the few areas in Myanmar where civilian firearms ownership is permitted, in deference to local tribal customs. The complexity and scope of craft-production throughout the country varies. In Karen State, for example, craft-production is mostly restricted to simple weapons such as slam-fire shotguns and rifles, muskets, and bolt-action rifles. 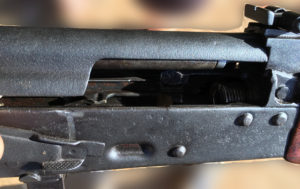 Figure 1.6 A view through the ejection opening of a Yat-Thai rifle. Note how the M16A1 barrel has been wedged into the trunnion of the original AKM-pattern self-loading rifle with East German MPiKM selector markings (source: ARES).

Figure 1.7 Markings on the M16A1 barrel of a Yat-Thai rifle. The marking “C MP CHROME BORE” was applied to M16A1 rifle barrels beginning in 1974, after rifle number 4,900,000. Note also the retrofitted Kalashnikov-pattern front sight that has been installed (source: ARES).

Despite being developed, at least in part, to avoid the extensive use of captured MA-series rifles, the Yat-Thai suffers from reliability problems of its own. According to a combatant ARES interviewed, a Yat-Thai self-loading rifle in SSA service recently suffered a near-catastrophic malfunction, blowing off the receiver cover and ejecting the bolt out of the receiver. However, when reassembled, the weapon continued to function normally. Whilst generally serviceable, it is understood locally that it is not a replacement for a production rifle. The Yat-Thai is mostly relegated to rear-echelon defence and security units within the SSA, freeing up more reliable and capable industrially produced rifles for combat troops. 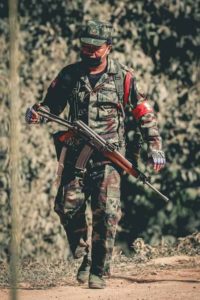 Figure 1.8 A Shan State Army – South (SSA-S) fighter armed with a Yat-Thai rifle with folding stock in early 2018. The magazine appears to be a Burmese-issued MA MK.II-series polymer magazine, currently in service throughout the Burmese Tatmadaw in the border regions. The fore-end is unlike any of the other Yat-Thai rifles seen in service or in the field. The profile matches that of early MA-series rifles fitted with wooden furniture instead of polymer (source: Shan social media via ARES CONMAT Database).