A video posted in August by anti-government forces during the fighting in Aleppo, Syria provides evidence of a range of camouflage patterns used in the conflict. At one point in the video, rebel forces move towards the front lines in BMP series infantry fighting vehicles and pickup trucks. As with non-state actors the world over, a range of uniforms of different patterns, styles, and origins are often pressed into service. Unlike conventional military forces in many countries, non-state actors often mix-and-match equipment from whatever is available. In many cases, stylistic considerations are also a factor in determining what fighters wear and use.

Many fighters will wear everyday clothing items such as t-shirts and cargo pants, often supplemented by whatever tactical equipment can be obtained. A wide range of vests, plate carriers, pouches, and bandoleers have been observed. Some fighters will wear camouflage clothing, where available. Like other equipment, this may be obtained from a variety of sources. Some examples will be captured from government forces or other non-state actors, others purchased domestically, while a few may even be purchased by groups or individuals from abroad, or supplied by sympathisers or supporters of a particular cause. In some cases, the use of a particular cut or style of uniform, or of a particular camouflage pattern, can point to support from particular state or non-state actors. Much like there are ‘flag items’ amongst a group’s arms and munitions, the same is true for all manner of other equipment, including camouflage pattern clothing.

The most common patterns used by the Syrian Arab Army (SAA) are locally-produced variants of two patterns originating in the United States, the m1948 Engineer Research and Development Laboratory (ERDL) woodland pattern, often known as the ‘leaf pattern’, and the M81 Woodland pattern. As such, due to defections, battlefield capture, and general domestic availability, these two patterns and their variants also remain commonplace amongst non-state armed groups in the country. However, a wide variety of different patterns are worn by both non-state actors and, to a lesser extent, government forces. The diagram below shows a breakdown of some of the patterns in a single ‘snapshot’ from the Syrian conflict. 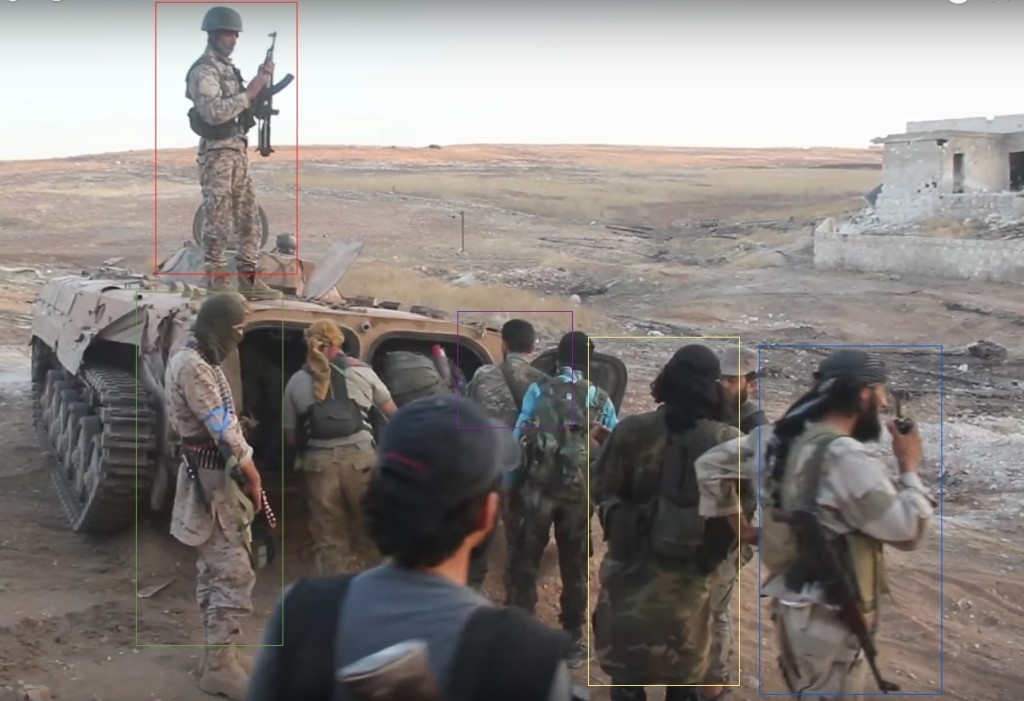 Outlined in red, the fighter standing on the BMP appears to be wearing a camouflage uniform in a variant of the British 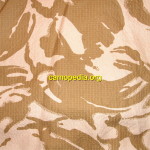 desert Disruptive Pattern Material (DPM) pattern. The DPM pattern was developed in the early 1960s as a woodland camouflage and began to be issued to British troops towards the end of the decade. The pattern was then developed into desert variants for British troops in advance of the first Gulf War, however visually similar desert DPM pattern variants had already been exported from the UK to Iraq, and licensed to companies producing uniforms for Gulf nations including Kuwait, Oman, and Saudi Arabia. Yemen and Iran have also used desert DPM type patterns and uniforms in recent decades. These regional neighbours are the most likely origin for the uniform seen here in Syria, however various iterations of the pattern also remain widely available from online retailers.

The fighter outlined in green also wears a desert pattern uniform. This pattern appears to be the desert variant of the 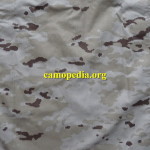 Spanish M09 Ejercito Pixelado design, sometimes referred to as ‘M09 Arido Pixelado’. This pattern was issued to Spanish forces from 2009 and was modified from Crye Precision’s commercial MultiCam pattern. Because of its recent production and limited distribution this is an unusual pattern to see in Syria. However, European supporters of various non-state actors are known to have purchased and supplied numerous types of camouflage clothing and tactical equipment to fighters in Syria. Additionally, some groups have even issued specific instructions to so-called ‘logistics cells’, seeking European and American made equipment and camouflage. In March 2016, for example, Spanish officials seized a shipment of 200,000 military uniforms destined for Islamic State and Jabhat al-Nusra forces. Shipments such as these are one way this pattern may have entered Syria.

The fighter outlined in purple is wearing a uniform in the popular MultiCam pattern, or one of its many variants. It is most 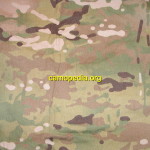 likely commercial MultiCam, which can be readily obtained through a variety of routes. A number of countries have contracted Crye Precision to produce uniforms for their armed forces, in both the original MultiCam pattern, and a number of slightly modified variants. The pattern has also seen tremendous commercial success, and is very easy to purchase both online and in physical storefronts. MultiCam, once uncommon to see in the hands of non-state actors, is increasingly being observed in conflict zones.

Outlined in yellow, the fourth fighter is wearing a very long field jacket in the US M81 Woodland pattern. Developed in the 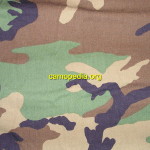 United States in the 1980s, this pattern is quite probably the most common uniform pattern in service today. It is seen in use with a number of armed forces and non-state actors alike, with wide geographical and ideological distribution. As noted, M81 is a common pattern for the SAA, which may present one possible origin for this example. However, it is also common amongst other neighbouring nations’ armed forces, and is popular in the Middle East amongst hunters and outdoorsmen.

The final fighter, outlined in blue, sports a uniform in a 3-colour desert camouflage pattern. The original design of this 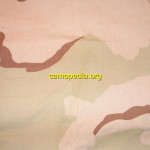 pattern was developed in the US and saw service in the mid-1990s before beginning to be replaced by UCP in the mid-2000s. This pattern was worn by the US military in Iraq and Afghanistan and has been supplied to regional actors, including the Iraqi government. It is likely that this fighter obtained this uniform locally as clothing in this pattern has been provided to a number of regional neighbours, and is commonly available in sporting goods stores in the Middle East.

As can be seen, there is a diversity of patterns even in a single ‘snapshot’ of the Syrian conflict. A number of other patterns of interest have also been documented, including a desert digital type pattern worn by Liwa’a Zulfiqar in Syria. This appears to be very close to that issued by the UAE’s Union Defence Force, and a similar pattern issued in Kuwait. Whilst Iran also issues a similar pattern (including to Saberin forces known to be operating in Syria), the cut of their uniform is distinctly different to that seen in this example.

Pattern swatches from Camopedia.org. Note these are representative examples and do not necessarily show the precise variant in question.