To complement this Research Note, ARES has launched an online tool which automatically calculates the likely year of production for a given FN Herstal FAL serial number. The tool also gives an interpolated estimate of the month of production with error bounds. ARES intends to create further tools for researchers, practitioners, journalists, and other interested parties in future. These can be found on our Tools page. 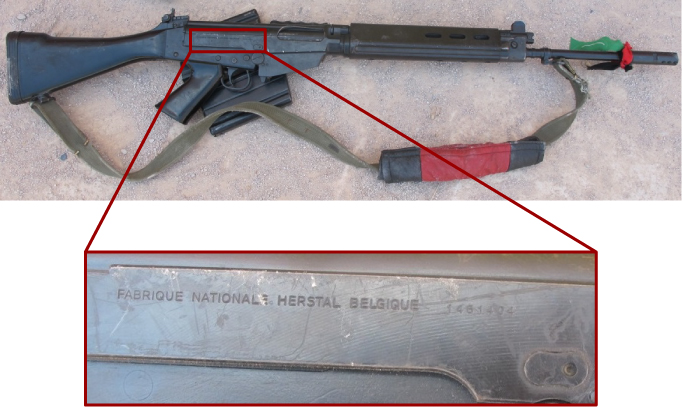 An FN Herstal FAL rifle, documented in Libya in 2012.

Research Note No. 9 and the associated online tool are precursors to ARES’ forthcoming Field Guide No. 1 – Identifying & Tracing the FN Herstal FAL Rifle, which will be released shortly. Field Guide No. 1 focuses on identifying and tracing Belgian FAL rifles, and provides the reader with key information on factory markings and physical characteristics. The guide further describes the primary variants produced by FN Herstal in Belgium, discusses FAL rifles documented in the Middle East/North Africa (MENA) region, and looks at some of the factors involved in their illicit diversion, using the ongoing conflict in Syria as a case study.