ARES Research Report No.3 “Raising Red Flags: An Examination of Arms & Munitions in the Ongoing Conflict in Ukraine, 2014” 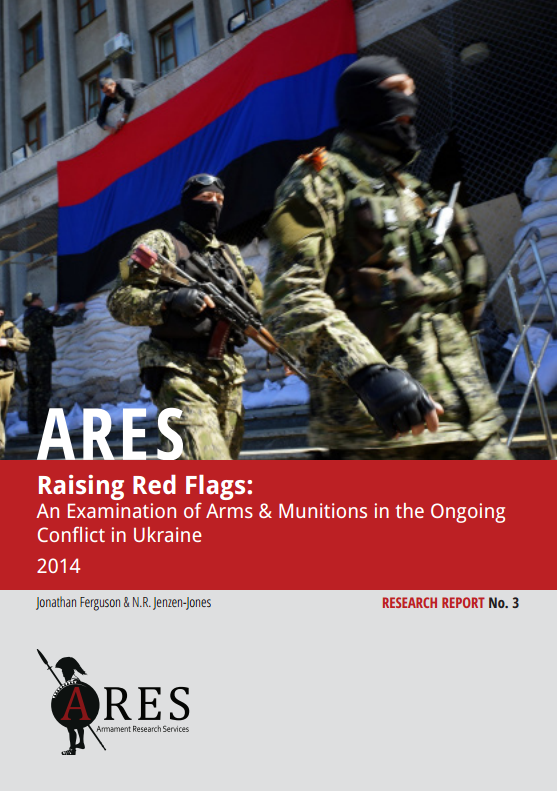 ARES is excited to announce the release of our latest Research Report, “Raising Red Flags: An Examination of Arms & Munitions in the Ongoing Conflict in Ukraine, 2014“. The report represents the culmination of months of research, identifying and examining over 100 different weapons systems, more than 60 different munitions, and more than 70 different armoured vehicles documented in the conflict. The report details a number of so-called ‘flag weapons’ which have likely been supplied by foreign states, including materiel produced after the fall of the Soviet Union, and up to present day. It also examines the use of cluster munitions, incendiary weapons, white phosphorus, land mines, and tactical ballistic missiles.

Some excerpts from the report:

This report examines the significant range of arms and munitions carried and employed throughout
the conflict by armed individuals on all sides. It also examines, somewhat less extensively, the range
of armoured vehicles and aircraft observed in the conflict. The contents of the report represent only
an initial assessment of materiel documented in Ukraine. This assessment relies primarily on publicly
released material made available through mainstream media sources and social media platforms. This
is supplemented by material collected directed by journalists, NGO workers, and local sources on the
ground.

As prior analyses by ARES and other organisations has consistently demonstrated, the recording
and analysis of arms and munitions in conflict zones can provide a useful yardstick for the progress
of a conflict. The original protests in late 2013 and January 2014 saw standard issue weapons in the
hands of Ukrainian security forces, with few surprises. When Russian military units swept into Crimea
in March, a shift was apparent towards modern Russian military weapons rarely seen on the export
market, before the arms landscape again changed to depict the more rag-tag assemblage of older
and expedient types now in use with pro-Russian militants in eastern Ukraine. It is clear that civilian
weapons can and will be sourced by Ukrainian residents from their homes and from gun stores, but
other sources are less clear. Limited illicit importation has certainly taken place. For example, there is
no legitimate civilian means of ingress for many of the arms produced outside of Ukraine which have
been documented in this report, including the ASVK and PKP recently observed, or indeed the several
anti-tank and anti-aircraft systems identified as foreign.

The Hoplite blog will feature several posts over the coming weeks which highlight interesting items within the report, and add more detail to the discussion on these. The first will be a look at some of the Soviet and Russian produced incendiary, thermobaric and fuel-air explosive (FAE) weapons identified in eastern Ukraine.

3 thoughts on “ARES Research Report No.3 “Raising Red Flags: An Examination of Arms & Munitions in the Ongoing Conflict in Ukraine, 2014””