In April 2019, Libyan National Army forces loyal to Khalifa Haftar captured the city of Gharyan in north-western Libya, approximately 70 km south of Tripoli. The city was recaptured by the Government of National Accord (GNA) forces in June 2019, with Haftar’s forces leaving behind materiel. According to Hamed Alzwy, who works in the Office for the Spokesperson for the GNA, this included a number of “missiles” used by Haftar’s forces.

Images supplied to ARES show that the items in question included at least two Chinese-made GP6 laser-guided 155 mm artillery projectiles. These fall into a general category of weapons known as ‘precision guided munitions’. Precision guided munitions (PGMs) are those which can alter their flight paths to more precisely strike a target. PGMs are increasingly common amongst major militaries, however comparatively high per-munition cost and other factors restrict their use among the armed forces of developing nations. Nonetheless, more and more have been documented in service with the armed forces of developing nations, and in the hands of non-state actors. 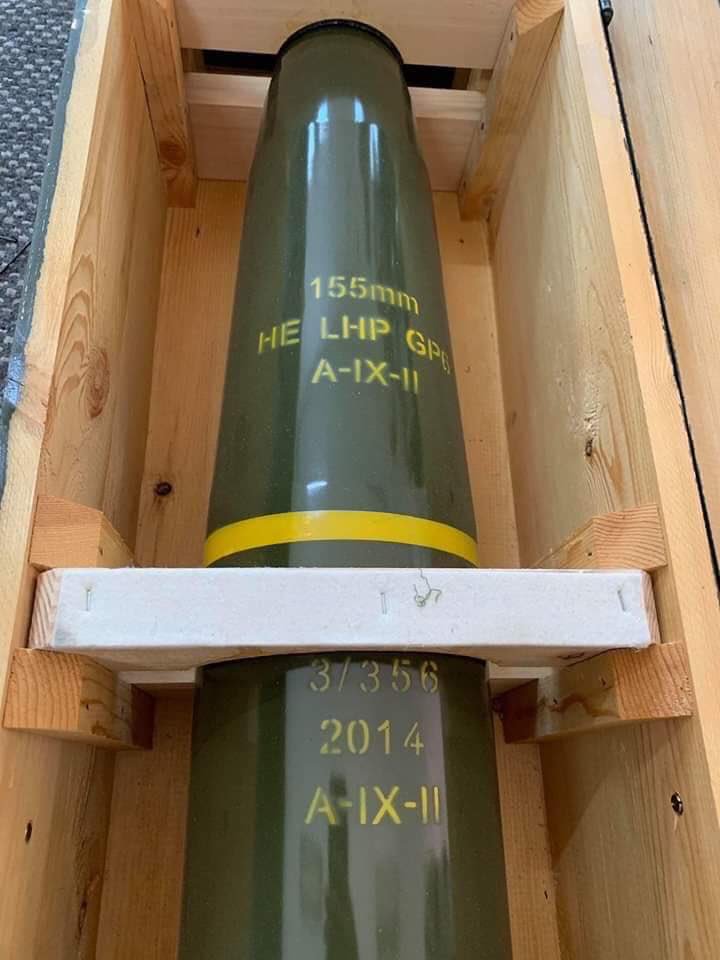 Figure 1.1 A Chinese GP6 laser-guided 155 mm artillery projectile, still in its packaging, as recovered from Gharyan, Libya in June 2019. Source: GNA via ARES.

The Chinese GP1 series are export variants of a semi-active laser-guided projectile based on a licensed copy of the Russian Krasnopol system. China first acquired a license for the production of the Krasnopol system from Russia in 1997, and began serial production by 2000. The GP6 is, at time of writing in 2019, the latest iteration of the GP series. It has a minimum range of 6 km, a maximum range of 25 km, and a claimed first-round hit probability of at least 90%. The manufacturer has also claimed the GP6 is more resistant to jamming than its predecessors, and features variable laser coding meaning that different sets of projectiles and designators can engage different targets.

Munitions employing semi-active guidance types rely on energy transmitted from another platform, such as a portable laser designator, that is received by the munition. Both the Russian Krasnopol system and the Chinese GP-series copies and derivatives consist of guided projectiles, fired from standard 155 mm guns; one or more portable laser target designators that illuminate targets; and synchronisation and communications systems. The nose cone of the projectile separates during flight, exposing the seeker head. This detects and processes energy from the laser designator, which is reflected from the target, generating a target lock. The projectile then actuates control surfaces to manoeuvre as necessary towards the target, which must remain illuminated by the target designator. This weapon manoeuvres during the terminal phase, and as such is known as a terminally-guided munition.

The munitions recovered in Gharyan were still in their packing crates. These crates were marked for delivery to the UAE Armed Forces. Specifically, they were addressed to:

The crates were also marked with the contract number, DP3/2/6/1/2006/23/A, which indicates a contract date of 2006. It should be noted, however, that arms contracts are often modified or extended, and that date does not indicate that the munitions were purchased (or even approved for export) in 2006. Indeed, the GP6 had not even been introduced to Norinco’s export product line by then. The UAE Armed Forces confirmed its acquisition of GP6 laser-guided projectiles in February 2019. 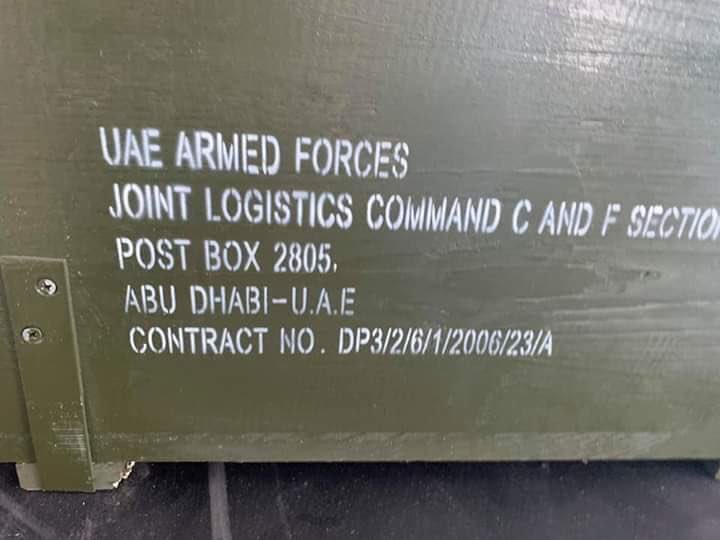 The munitions themselves were marked as follows:

These markings indicate the calibre of the projectile (155 mm), the functional type (HE; high explosive), the (LHP for ‘laser homing projectile’, a type of PGM), and the explosive fill (A-IX-II). A lot/batch number (3/354) and year of production (2014) are also marked on the projectiles. The packing materials included with the munitions include a quality control inspection certificate, showing that one of the munitions underwent inspection on Christmas 2014. According to Alzwy, the GP6 projectiles were found along with Javelin missiles. 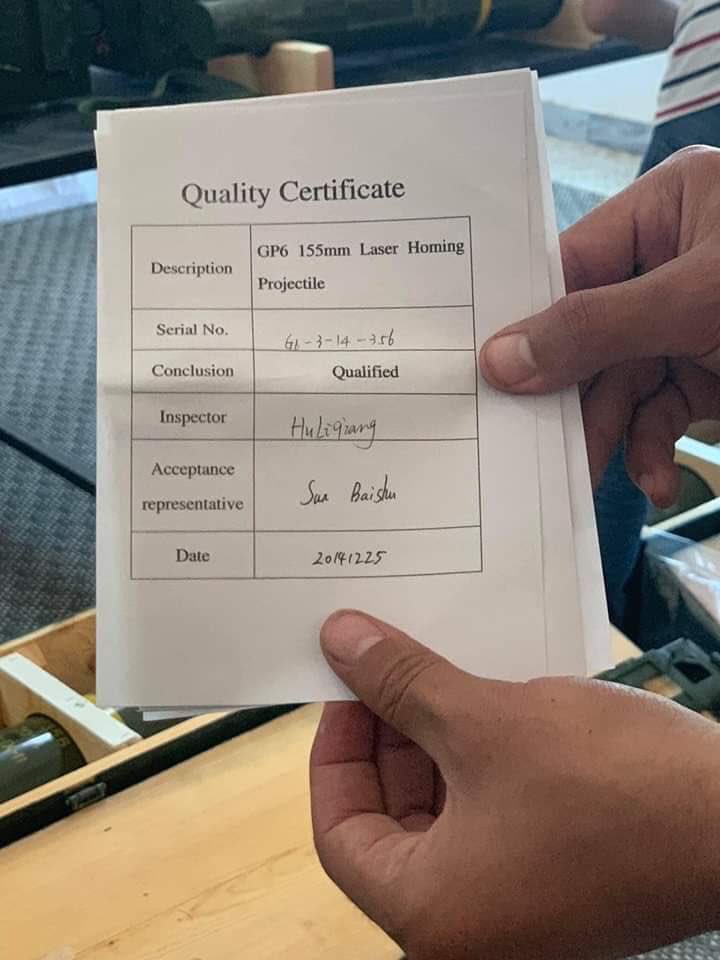 This is not the first time the UAE has been implicated in supplying precision guided munitions in the Libyan conflict. In early November 2017, images showing the remnants of a precision guided artillery projectile documented in Warshafana, a rural region located 25 kilometres west of Tripoli, were shared via social media. According to the Libya Times, these projectiles were fired against Warshafana by the forces of the Zintan Military Council. ARES identified the munitions remnants as those of a Chinese GP1-A laser-guided 155 mm artillery projectiles. At the time, ARES also assessed that the proximate source for the GP1-A was the United Arab Emirates, and that these munitions were most likely captured from Haftar’s forces. An earlier example of a GP-series munition in Libya was documented by the UN Panel of Experts on Libya. Subsequently, two further examples were documented elsewhere in Libya. 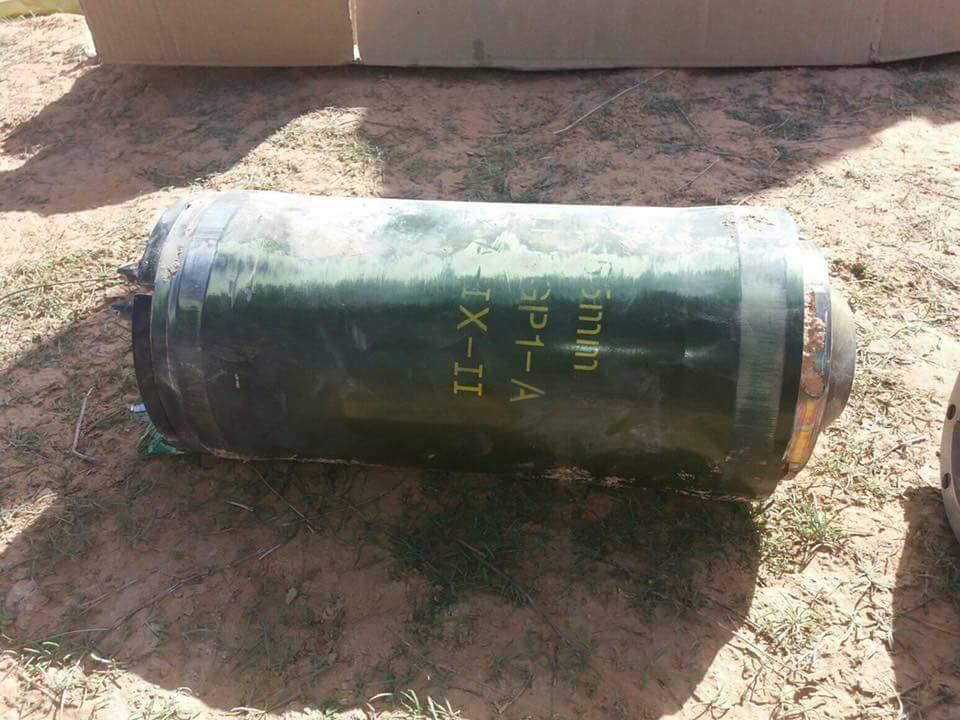 Libya has been under a UN arms embargo following the outbreak of hostilities in February 2011. Further resolutions in 2013 and 2014 modified the embargo, and at present lethal arms and related materiel of all types intended solely for security or disarmament assistance to the ‘Libyan authorities’ can be imported with the advance approval of the sanctions committee. The GNA has also submitted a case against the UAE through the Libyan Attorney General, which was filed on 23 June 2019. 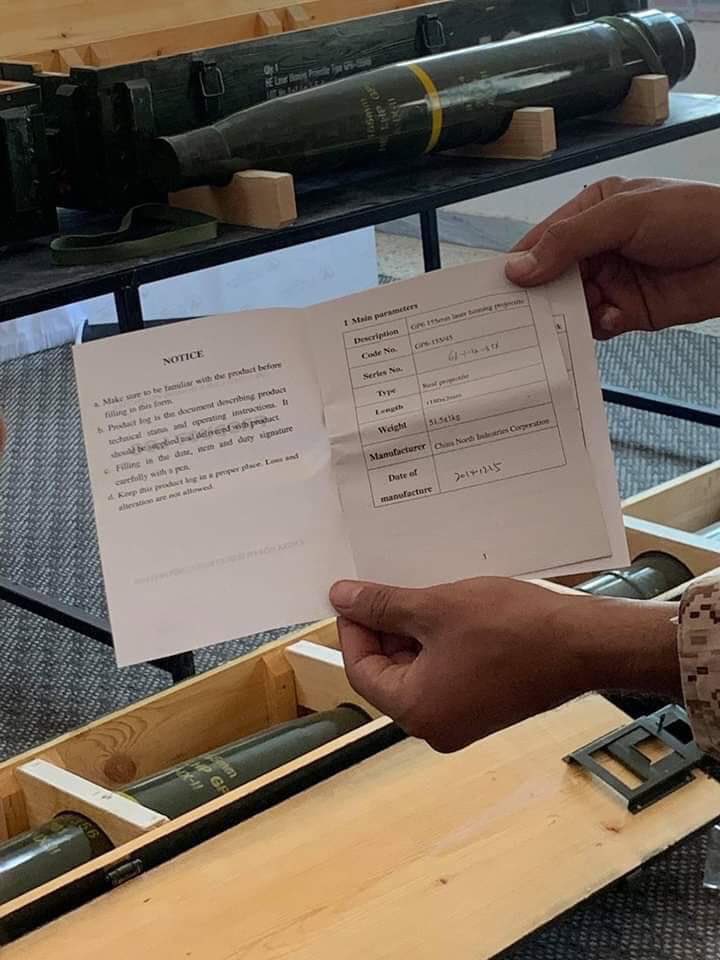