A video published 23 August 2017 which was purportedly produced by the ‘Defense Industry Department’ of the armed forces who are loyal to the Ansar Allah (‘Houthi’) movement, shows several types of craft-produced weapons being developed and employed, including anti-materiel rifles and light cannon up to 23 mm and even 30 mm in calibre. The video was first broadcast on the Houthi-owned Yemeni TV channel AlMasirah, and gives some basic specifications for each of these weapons. It should be noted that the technical specifications given are not necessarily accurate. In particular, the claimed ranges of these weapons will, in reality, vary significantly with user skill – almost invariably being much shorter than described. 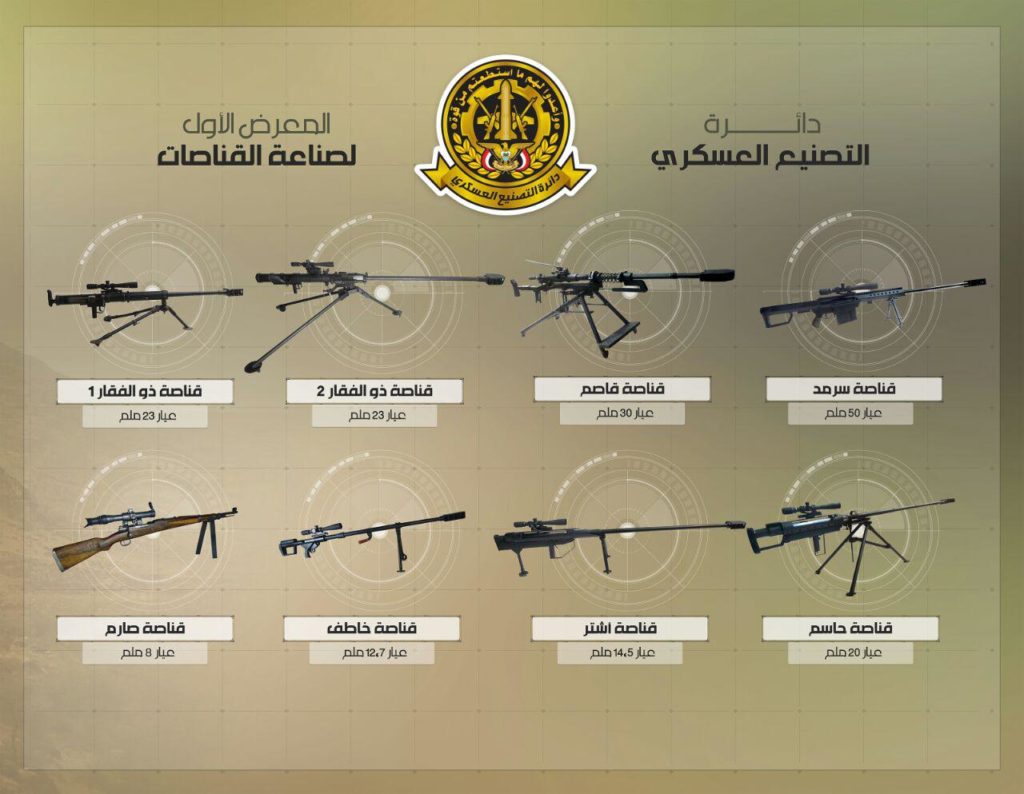 The Sarem 8 mm sniper rifle is stated as having a maximum range of 1600 m and a weight 4 kg. This weapon appears to be a Mauser Kar 98k type bolt-action rifle chambered for the 7.92 x 57 mm cartridge. It is quite probably the Yugoslav M48 copy which has been seen several times in the region. These old rifles are fitted with what appear to be 6x 24 mm POSP optical sights. Despite their age, these rifles remain may continue to pose a threat in experienced hands, particularly when fitted with an optic. 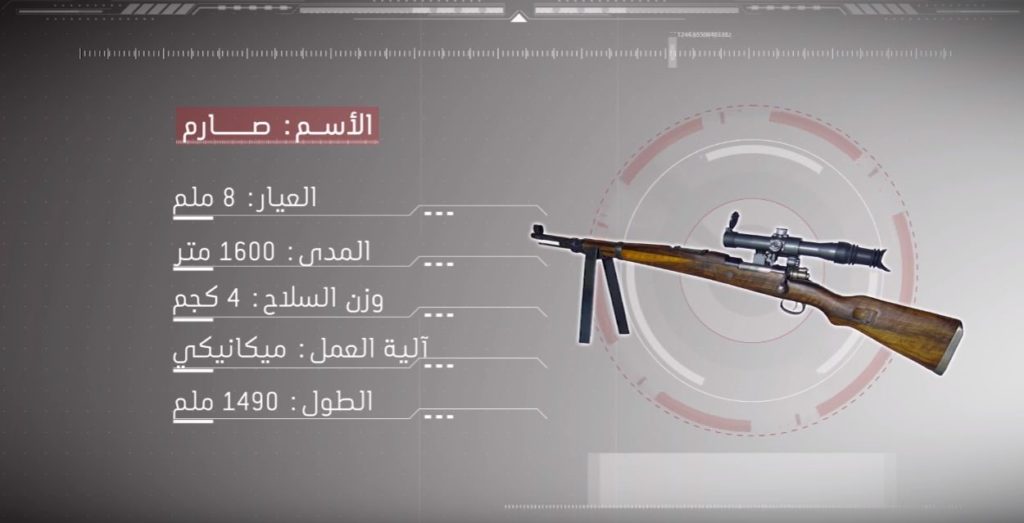 Shown next are craft-produced anti-materiel rifles (AMRs) chambered for the common Soviet-origin 12.7 x 108 mm and 14.5 x 114 mm cartridges, commonly used by heavy machine guns. As is common practice for many craft-produced AMRs globally, surplus barrels from weapons such the Soviet/Russian DShK and KPV type heavy machine guns form a key component in the construction of such rifles. The weapons are typically simple single-shot bolt-action guns, occasionally being magazine fed.

Such makeshift adaptations have become increasingly common where captured or damaged vehicles provide a ready source of mounted weapons which can be disassembled and re-purposed. In several cases, damaged weapons have had viable barrels salvaged from them. The allure of such craft-produced AMRs owes to the fact that personnel and even lightly armoured vehicles can be defeated from a sufficiently long range with the large cartridges, making the user difficult to detect. 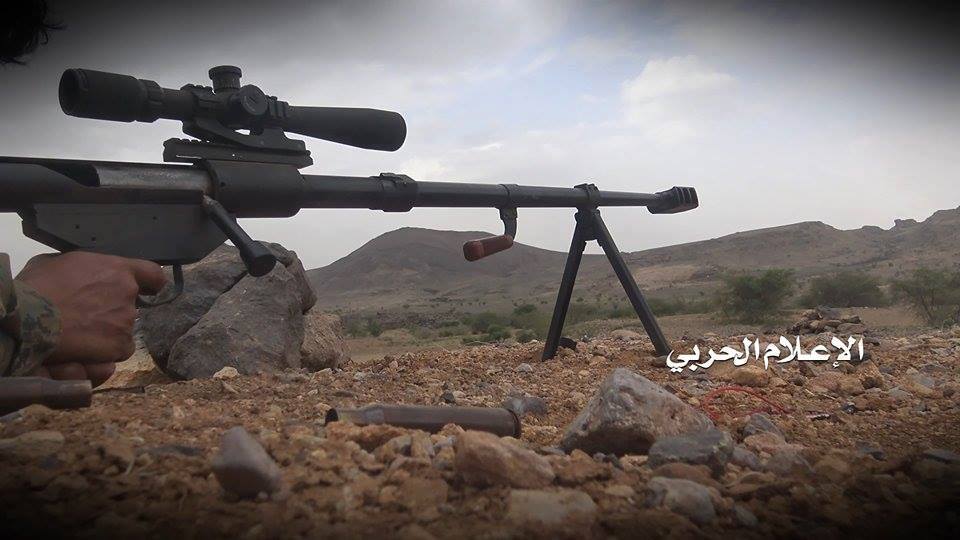 It’s no wonder that in the conditions of shortage of large-calibre sniper rifles of industrial production from other countries, locally craft-produced models are appearing frequently in multiple conflict zones. Such weapons are usually produced in typical light workshops equipped with lathes and milling machines, which may be capable of producing relatively high-quality mortars, AMRs, and other weapons. In some cases, direct copies of conventionally-produced weapons are made, such as the SPG-9 recoilless guns produced in workshops operated by ISIS in Mosul.

The 12.7 x 108 mm Khatef rifle is described as being portable in all terrain, with a weight of 14 kg and range of up to 1500 m. It appears to be manufactured using a basic tubular receiver into which is fitted a DShK ytype barrel. Several of these appear to have been taken from a Chinese HMG known as the Type 54. 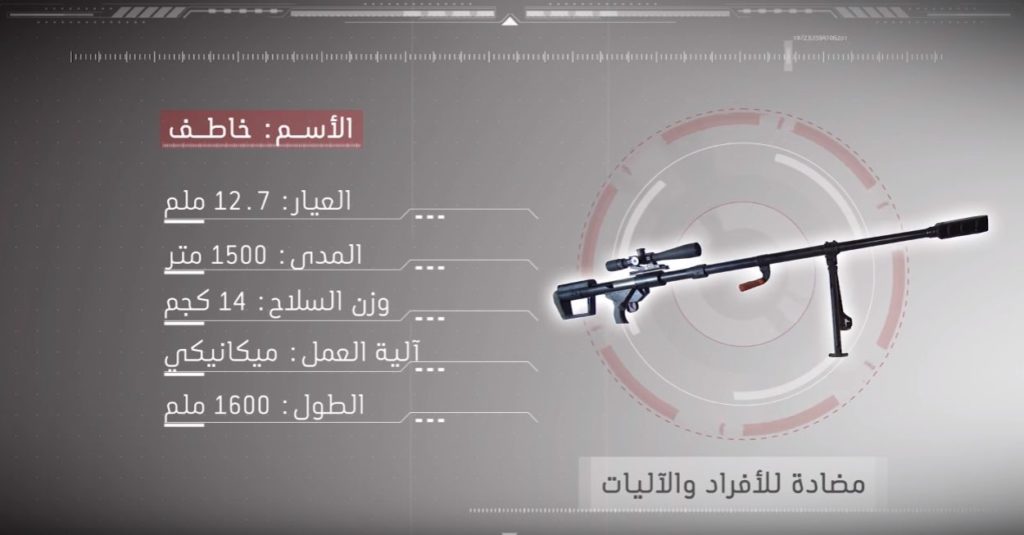 The 14.5 x 114 mm Ashtar is described as having a weight of 28 kg and a range of 3000 m. This much larger rifle is fitted with a monopod towards the rear to provide balance for the long, heavy barrel. 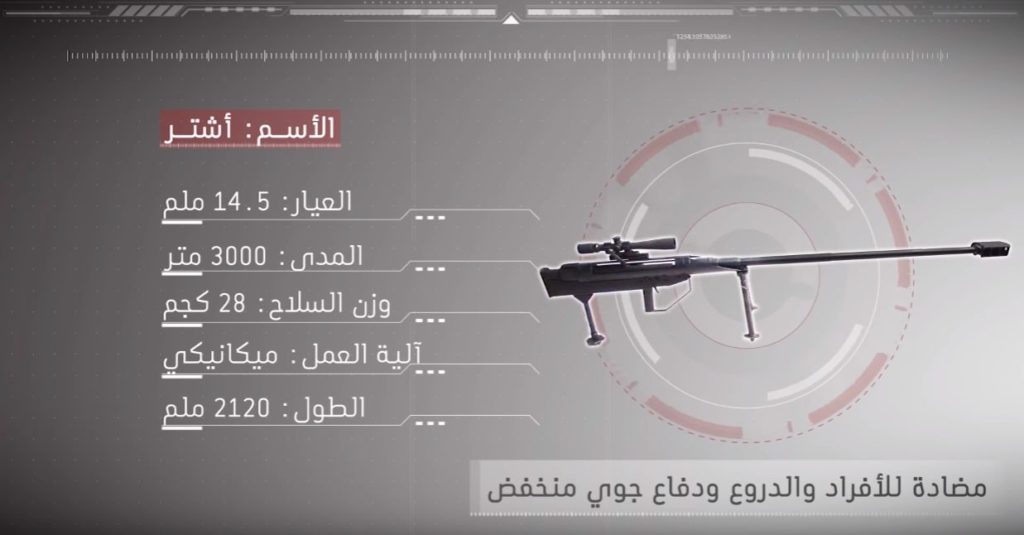 The 20 x 102 mm Hasem has a stated weight of 28 kg and maximum range of 2500 m. It is billed as being capable of engaging low-flying aircraft such as helicopters. The choice of this calibre is not accidental. Yemen remains one of the countries who continue to use US 20 mm M167 Vulcan Air Defense Systems (VADS) which are typically mounted on vehicles and have, in this conflict, been more commonly employed against ground targets. 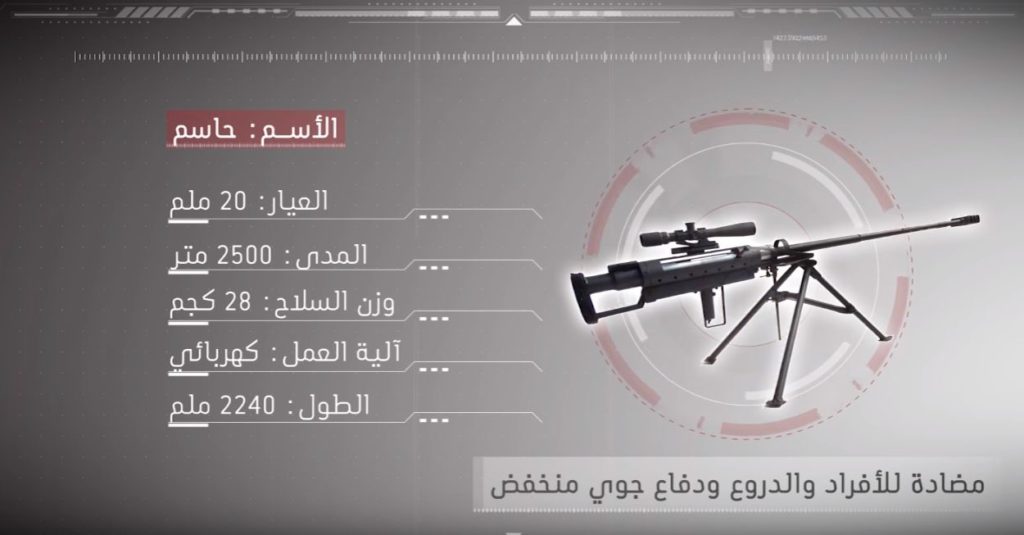 The Zulfiqari 1 is a 23 x 152B mm calibre gun, suggested for installation on ‘all types of military vehicles’ and claiming an accurate range of 2000 m. Weight is less than 25 kg. The Zulfiqari 2 is a larger version weighing some 62 kg, with a stated range of 4000 m. Construction appears to be very basic, if not crude, with plain steel tubing used for the receiver and grip. 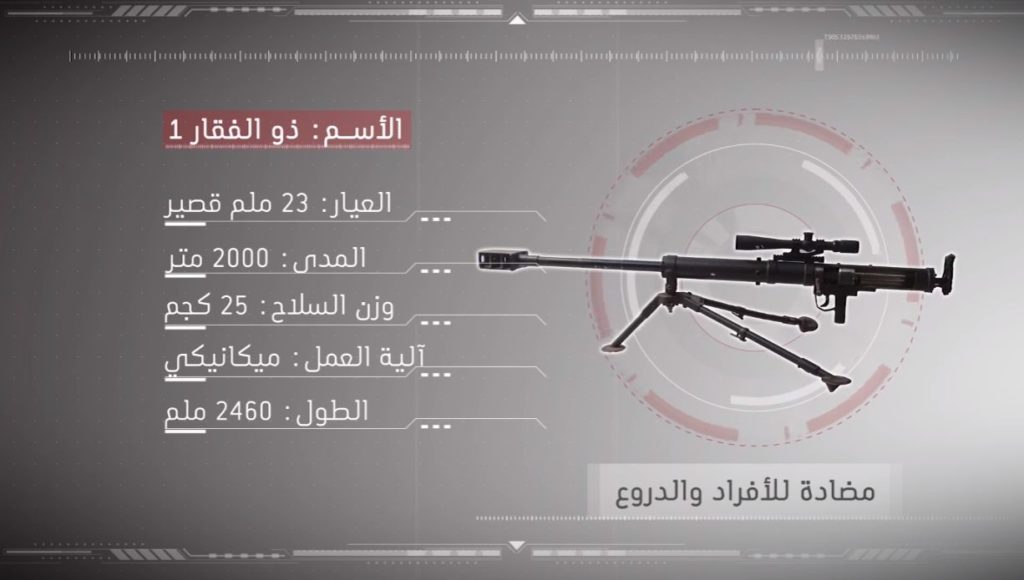 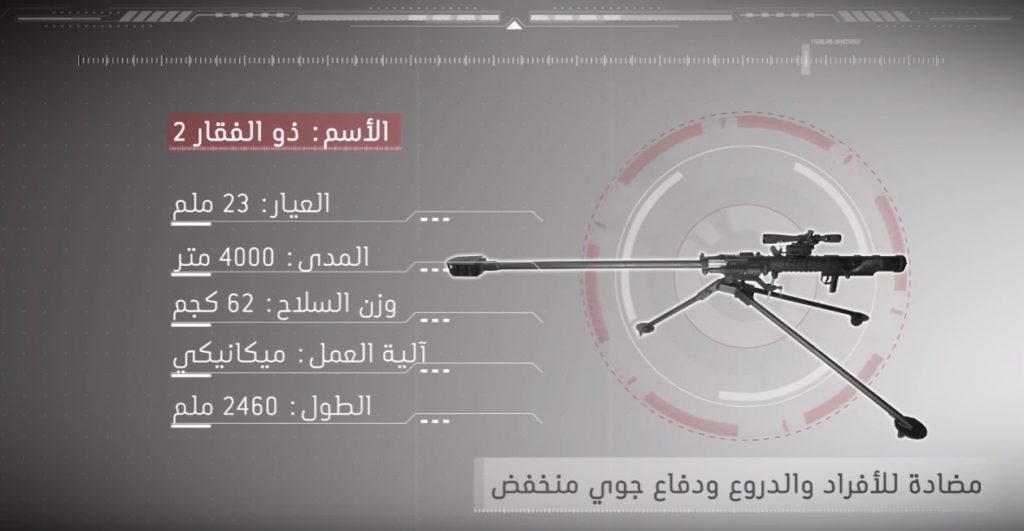 The most powerful of the improvised cannons shown is the 30 mm Qassem with a stated weight of 75 kg and maximum range of 5000 m. There appear to be at least two minor variations, both featuring external spring assemblies to mitigate what is sure to be substantial recoil. One of these appears to be adapted from a pair of automotive (motorcycle) shock absorbers. A tripod is shown for use, although semi-fixed emplacements and vehicle mounts are likely to be more effective. The video also includes some brief footage of the Qassem being manufactured in a workshop using very basic equipment. 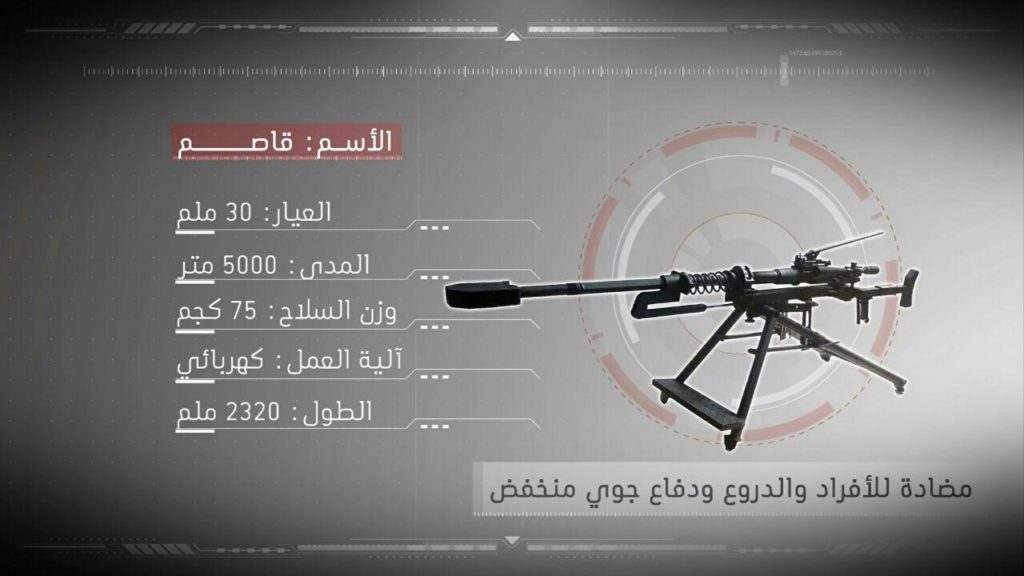 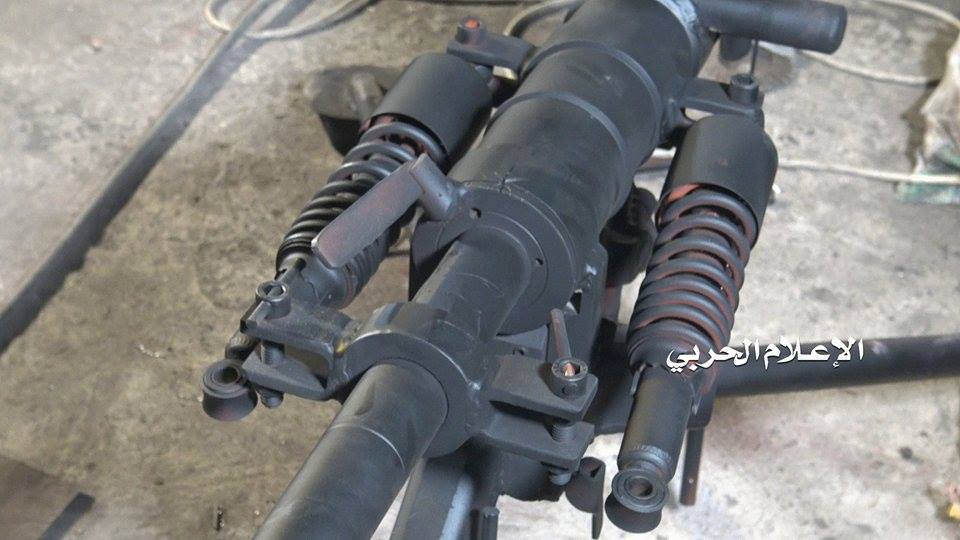 All screenshots from video and articles by Yemeni TV channel AlMasira.

Stay tuned to The Hoplite for the release of a forthcoming Small Arms Survey paper examining the global production and use of improvised and craft-produced small arms and light weapons (including a number of AMR designs), authored by ARES personnel – Ed.