Note: The design of the AK-12 has since moved away from the more distinctive model described herein. The newer iteration is more conventional in design and appearance.

The Hoplite recently covered a distinctive personalised AK-74M self-loading rifle captured in Syria by Islamic State forces from a Russian special operator. The plethora of accessories fitted to the weapon has caused some confusion (in the article’s comments section, in emails ARES has received, and elsewhere) with the more modern AK-12. It is important to note that as of March 2016, no such example has been recorded, and observers should be sceptical of any claim of an AK-12 ‘in the wild’. This said, although the AK-12 has yet to be formally adopted by any military, it has since 2015 been undergoing troop trials with the Russian military. It is therefore not inconceivable that an example might yet be reported in use on exercise or even in the field, prior to any large-scale adoption of the type.

Though this potential successor to the AKM and AK-74 series does substantially retain legacy Kalashnikov internals, its receiver architecture is quite different and presents several identification features. However, several of these are hard to distinguish without close scrutiny, or are modular and therefore easily eliminated by the installation of alternate or after-market parts. For example, it will no doubt be possible to fit an AR15-style telescoping stock to the AK-12, something already possible for the AK-74M. Equally, although the muzzle brake is visibly much longer and of a different pattern to that fitted to AK-74 rifles, this may easily be replaced. The general proportions of the weapon are in fact entirely different to the AKM or AK-74 but again, this can be hard for the layperson to determine without direct comparison. 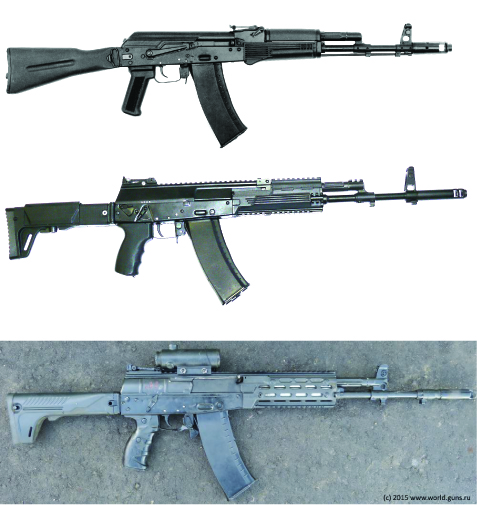 Further complicating identification is the fact that, despite a fixed designation, the design itself is not finalised and can be regarded as essentially a prototype that may undergo further changes before any substantial contracts are made for its purchase by the Russian government or other parties. To date, two main types are known, and these differ both in detail and in core receiver architecture. These are illustrated and detailed on Maxim Popenker’s World Guns website.

In short, the key visual recognition features of the AK-12 (not present on the AKM/AK-74 series of rifles) are: 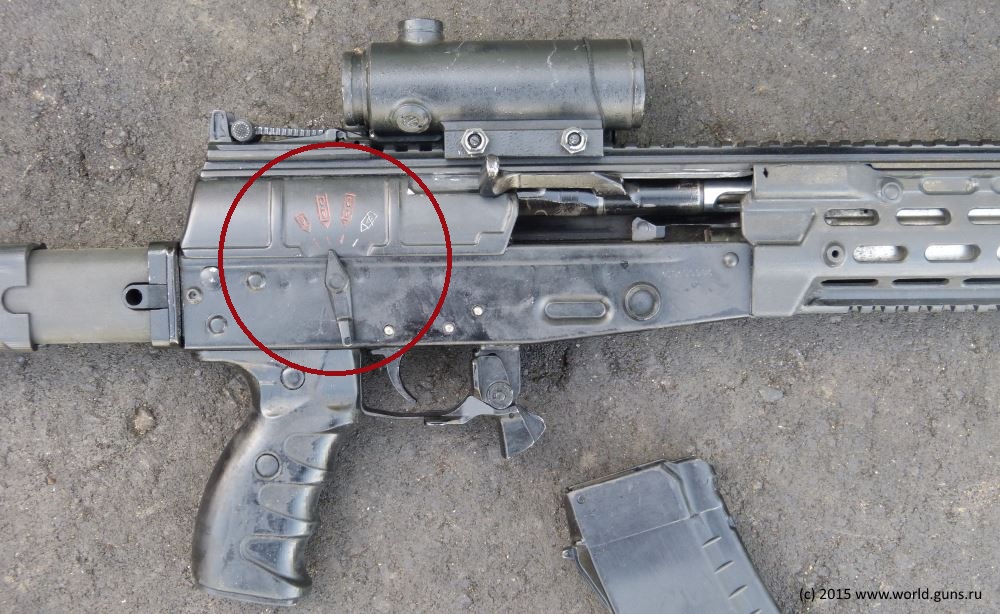 Perhaps the single most important diagnostic ID feature of the AK-12 is the selector/safety lever (1). On all earlier Russian AK variants, this is a large sheet metal component located immediately behind the bolt and doubling as a dust cover when closed. In common with other product-improved AK variants like the Israeli Galil series, this new switch is located low on the receiver to permit operation by the thumb of the firing hand. In the case of the AK-12, the control is duplicated on both sides (or ‘ambidextrous’ in the tactical vernacular). The traditional AK designs exhibit a large gap between the top cover and the selector when the latter was pivoted downwards. The above design change has eliminated this gap behind the bolt. Instead, there is a slot in front of the bolt to allow a relocated cocking handle to reciprocate within it. The cocking handle is therefore much further forward, instead of being integral with the bolt carrier, and may appear on either side of the rifle. 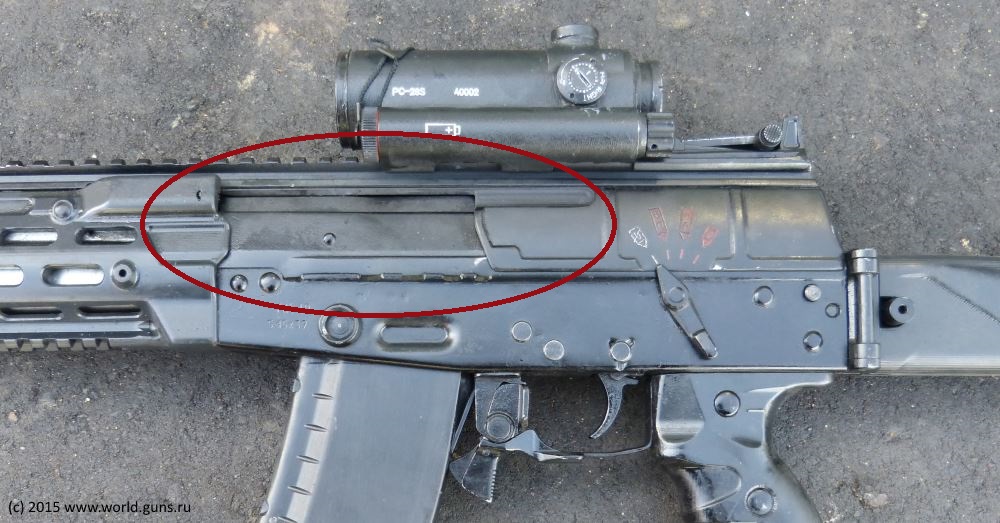 If this selector arrangement is not visible, the large slab-sided bolt carrier itself (2) may be. This is remarkably ‘clean’ compared to the contoured bolt of earlier AKs. Crucially, just as there is now a selector switch on both sides of the weapon, the bolt carrier too is visible from both sides. This is the result of a redesigned sheet metal ‘top cover’ that is open on both sides. Unlike all previous Kalashnikov designs, this cover lacks the  disassembly push-button of the original AK, which would typically be located at the rear.

Finally, observers should also look for (3) an integrated front sight tower and gas block, similar in concept, if not form, to that found on some foreign designs including the Iraqi Tabuk ‘short assault rifle‘ variant. In the 2013 prototype, this was removable, leaving a short section of ‘Picatinny’ style accessory rail on the gas block (in fact, the form of the inferred iron sight itself is unknown). In the 2015 redesign, it is a single integrated unit, once again unique among Russian AK series rifles.

The original AK was designed to be simple and cheap to produce on 1940s era machinery. With modern manufacturing techniques and ergonomic considerations (and fashions), a primary aim of the AK-12 programme has been to make the rifle more user-friendly. The recognition features described above all spring from this design requirement. The other, modular aspects of the design such as furniture and accessory attachment points will be harder to differentiate from other types. However, although railed top covers and handguards are now commonplace on other variants, the AK-12 is nonetheless so far the only Russian AK to be produced with these feature as factory standard.

Important note: If the AK-12 is ultimately adopted by the Russian military, or sold in significant numbers for export, further design changes may be made. It is also possible that further variants will be produced based on the AK-12 design, either for specific customers, or for more general domestic and export sales.