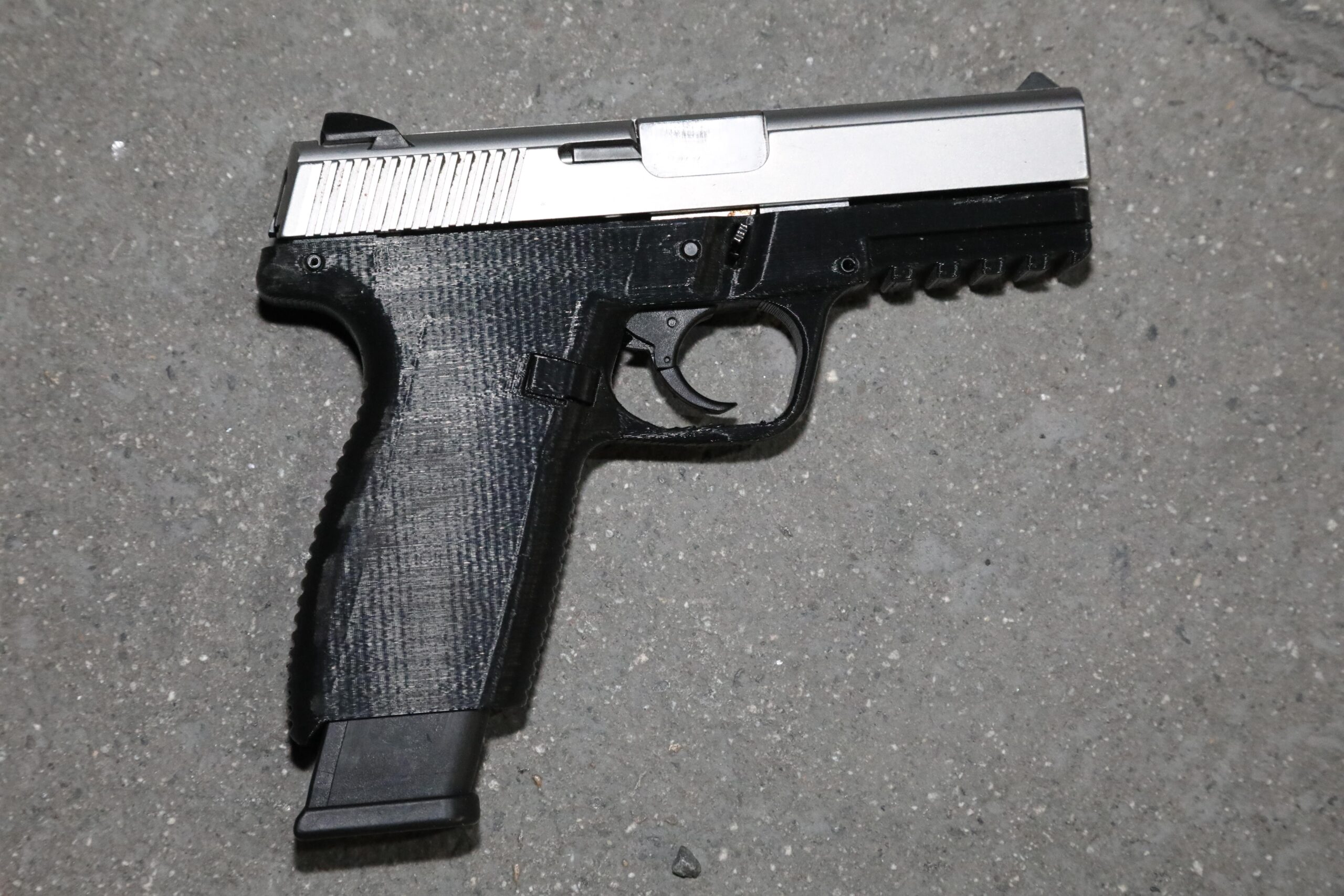 On 18 June 2020, at approximately 1752 local time, 18-year-old Andres Guardado was fatally shot by a deputy from the Los Angeles County Sheriff’s Department (LASD) after allegedly drawing a firearm. The shooting took place in the 400 block of Redondo Beach Boulevard, in the unincorporated Gardena area, outside Los Angeles. A handgun was recovered from Guardado’s body. The LASD subsequently confirmed that the weapon was “devoid of any identifying marks or serial numbers and contain[ed] a loaded large-capacity prohibited magazine”.

In August 2020, the LASD released images of the firearm he was reportedly armed with at the time he was killed (see Figure 1.1). The weapon was initially described by commentators as either a ‘combination gun’ using both Smith & Wesson and Glock OEM parts, or as a firearm built on a polymer 80% frame. So-called ‘80%’ lower receivers and frames are near-complete components which may be sold without restriction in the United States. 80% lower receivers or frames can be completed by the possessor before being assembled into a finished firearm.

In analysing the released of images of the firearm, it is evident that it was assembled using a 3D-printed frame for a Smith & Wesson SW9 or SW40 series weapon. This frame design is able to accept components for either 9 × 19 mm or .40 S&W calibre firearms, but differs from factory-specification SW9/SW40 frames in that it accepts Glock-style magazines rather than the much-less-common proprietary Smith & Wesson magazines. The design appears to be approximately 9 months old, and is referred to in some online sources as the ‘FMDA 3D printable SD9 Glock mag compatible frame’. Firearms which combine 3D-printed components with commercially produced parts are sometimes known as ‘parts kit completion’ or ‘parts kit conversion’ (PKC) weapons (see pp. 15–16 in ARES’ Desktop Firearms report for further discussion of this type of firearm).

The recovered weapon highlights one particularly interesting aspect of 3D-printed firearms and components: they allow for ready customisation and modification of factory designs to suit the circumstances under which they are assembled or used. Glock magazines are common, reliable, and more affordable than other proprietary mags, and it is fair to say that the SW9/SW40 series of pistols may be a more attractive option for some users when they can be used with these common magazines. Another advantage is that a widely tested, 3D-printable Glock magazine design already exists, which may allow for much easier acquisition of additional magazines in jurisdictions where either magazines or their capacity are legally restricted or not readily available. The magazine in this case was reported as being of a high-capacity (or “large-capacity”) design; in the U.S. state of California, this means it is capable of holding more than 10 rounds.

Subsequent statements from the LASD indicate that the frame was identified as 3D-printed upon forensic examination. The slide and barrel were confirmed to be Smith & Wesson OEM components, and the Glock-type magazine was found to be loaded with fourteen .40 S&W cartridges. Mr. Guardado’s DNA was obtained from the pistol’s trigger, trigger guard, and magazine. The firearm underwent forensic testing and was found to be fully functional. Further ballistics analysis—which could potentially match this particular firearm to previous shootings in which it may have been involved (and from which viable projectiles were recovered)—was still ongoing at the time of publication.

With thanks to Ivan T. for additional information.