As part of their strategic mandate to improve human security, The Geneva International Centre for Humanitarian Demining (GICHD) launched the final results of their Characterisation of Explosive Weapons research project on 6 February 2017, which sought to describe and explain key types of explosive weapons and their destructive effects on humans and structures. The research is comprised of a final report of the two-year study in addition to five annexed explosive weapons studies and a terminology paper, soon to be supported by a simulator software tool. This research is intended to reduce harm to civilians by making a substantial contribution to the ongoing discussions on explosive weapons in population-dense areas. 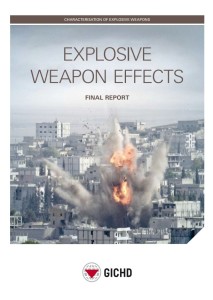 ARES Director N.R. Jenzen-Jones served as the co-editor for the final report, as well as a panellist for the launch event, where he was joined by a group of international experts and practitioners from the humanitarian, policy, advocacy, and legal fields to discuss the characteristics, effects and use of explosive weapons in populated areas. A number of other ARES staff contributed to drafting and editing the report. This contribution builds on substantial previous research from ARES in the EWPA field, including two important reports commissioned by the International Committee of the Red Cross (ICRC), including a general examination of the use of  explosive weapons in populated areas and a more detailed study examining the use of indirect-fire artillery weapons.

The GICHD Final Report takes five technical studies on explosive weapon systems, each of them known for their use in contemporary conflict zones, widespread stockpiling, and use in populated areas. The five weapons systems reviewed in the study are the 122 mm multi-barrel rocket launcher, 81—120 mm mortars, 152—155 mm artillery guns, 115—125 mm tank guns and the MK 82 aircraft bomb. The report assesses the effects of these explosive weapons, their accuracy and precision, and characteristics of use. One of the report’s central contributions is filling the knowledge gap of the humanitarian consequences related to explosive weapon use.

The GICHD report contains some discussion of considerations to mitigate each of the explosive weapons’ impact on civilians, encourage further research on explosive weapons, and supports efforts by actors in the international community seeking to better understand the ramifications of using explosive weapons in populated areas.