The history of this little-known firearm can be traced back to the summer of 1986, when János Egerszegi, the head of the Hungarian Institute for Military Technology (MN HTI), drafted specifications for a modern 9 × 19 mm sub-machine gun over the space of a few weeks. While the Hungarian military was, at that time, still deeply embedded within the Warsaw Pact system with its standardised 9 × 18 mm pistol calibre, the newly established counter-terror units of the Hungarian police (Komondor) disliked the weak round – and all of the available weapons that fired it. It seems highly likely that this new project was driven by the police.

The specifications as written left room for options; Egerszegi specifically stated that both recoil- and gas-operated designs would be accepted for testing. In total, three proposals reached the committee responsible for evaluating potential participants in the programme; the design submitted by Fegyver- és Gázkészülékgyár (FÉG) was selected as the most promising. Shortly after this decision, a project was established and work began on the first prototypes. The project was named ‘ZUV’, standing for three names: Zala, Ungvár, and Végh. Interestingly, none of these people made any direct contribution to the design; it was developed by one of FÉG’s production engineers, Zoltán Horváth. 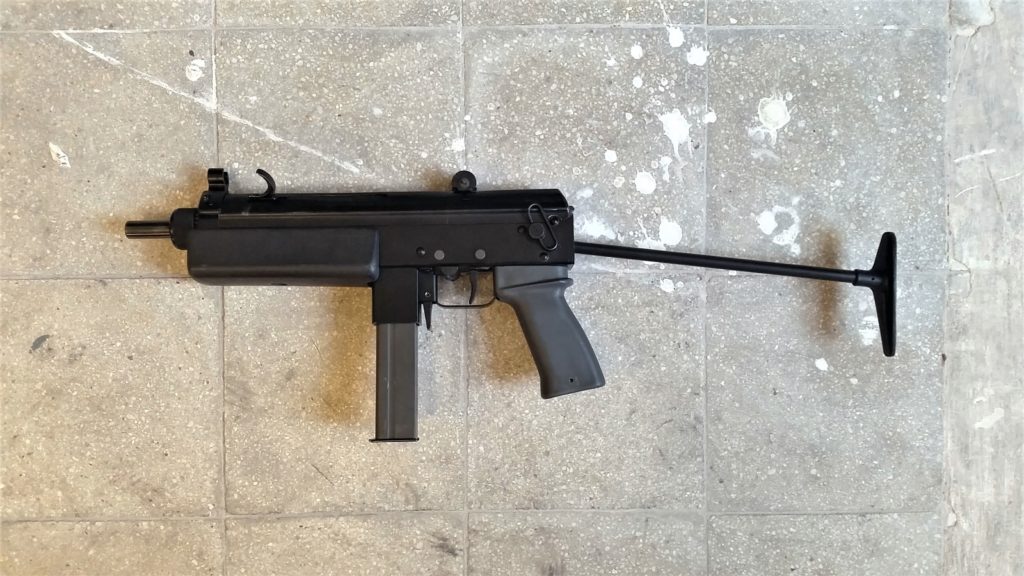 The programme that eventually became the KGP-9 (kis géppisztoly-9 or ‘small sub-machine gun – 9’) proceeded according to plan – at least initially – and the first pre-production models were ready for limited trials in 1988. These concluded in late 1988 with very promising results. The personnel involved in testing especially liked the robust and very durable operating system, which promised to offer a very long service life, and the reliable performance and precision of the weapon even in harsh climatic conditions. All momentum on the project was lost during the socio-economic upheaval of 1989, which shifted focus and limited funds to other issues. It was not until 1993 that the project was revived and reassessed. Besides the growing demand within the police force, the Hungarian military was now free of the regulatory requirements of the Warsaw Pact and was interested in acquiring firearms in NATO calibres.

Field trials in 1993 gave less favourable results than those of a couple of years earlier. Reliability issues, stemming from failures to feed, plagued the gun. It seems very likely that the guns which were tested were of the same early trials production batch that were tested in the late 80s, and so it is somewhat surprising to read reports of reliability issues which were note noted in the first evaluation. The explanation offered by the manager of the KGP-9 project is that the poor tolerances of the 9 × 19 mm ammunition supplied by Hungarian manufacturer MFS was the primary cause of the issues. This point of view is strongly contested by police officers who took part in the testing. They claim that ammunition from the same lot that failed in the KGP-9 was reliably and precisely shot from UZI sub-machine guns and the Jericho 941 service pistol. In addition to feeding issues, testing personnel strongly criticised the folding stock and the design of the safety. 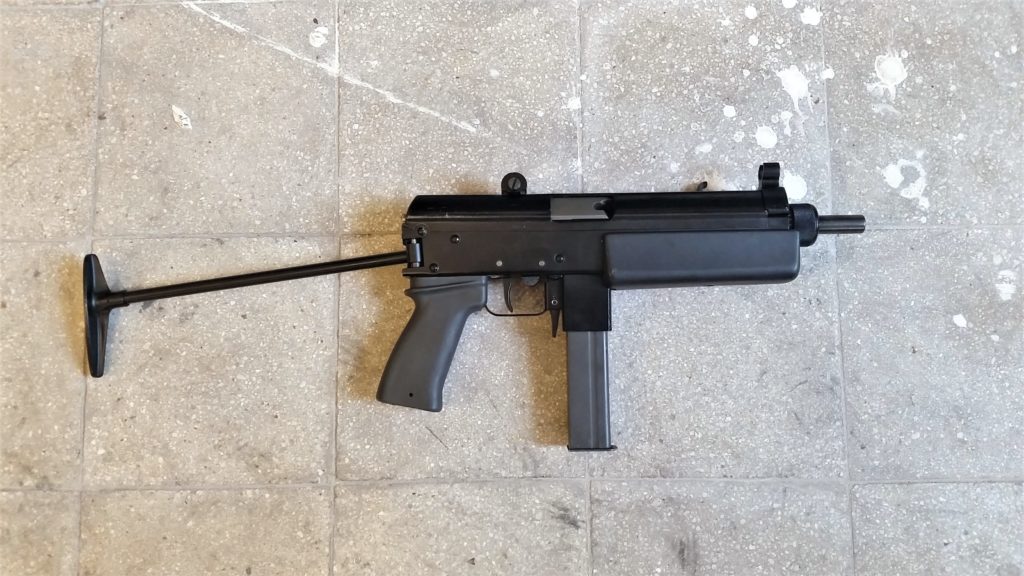 Interestingly, these criticisms had a very limited impact on the further development of the firearm. The programme continued, albeit slowly, and prototypes – allegedly ready for fielding – were presented in 1996. These pre-production models failed miserably. The gravest problem was the tendency to fire automatic bursts while the selector was in the semi-automatic position. A subsequent technical evaluation painstakingly reviewed every potential source of failure and identified it within the production processes of FÉG. The formerly state-owned arms manufacturer – by now known as FÉGARMY Fegyvergyártó Kft. (FÉGARMY Arms Factory Ltd.) – had recently been fully privatised and had lost a substantial number of its superbly trained workforce. The evaluation of the production processes revealed that FÉG was unable to provide required quality control, adherence to tolerances, and project management to implement a new service weapon design into production at that time. Correcting these substantial problems delayed the final acceptance of the KGP-9 for a further year. In 1997, the sub-machine gun was once again tested by members of the military’s special forces and the Law Enforcement Agencies Training Centre (Rendészeti Szervek Kiképző Központja, or RSZKK). While the Hungarian military accepted the weapon as presented, the police rejected it as unsuitable for service. The IMI UZI and Micro UZI had already filled their requirements, and the Heckler & Koch MP5 had just recently passed a successful evaluation and would soon be fielded. 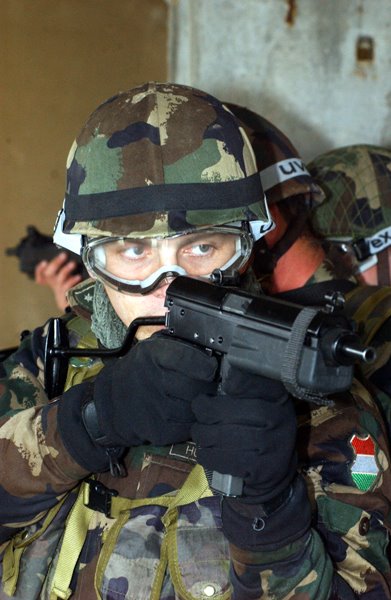 Despite the reluctance of the police to adopt the weapon, another branch of the Hungarian Ministry of Interior became interested in the design. The Hungarian prison service adopted the KGP-9 shortly after the police. The exact number of KGP-9 sub-machine guns manufactured in total is unknown. Approximately 1,000 examples were delivered to the military; some were taken on missions abroad in the 2000s, and served in operations in Kosovo, Afghanistan, and Iraq. Their military use is scarce nowadays and seems to be limited to the military police, who more recently fielded the CZ Scorpion EVO 3. Not officially declared obsolete it is likely that the KGP-9 has de facto fallen out of service.

The FÉG KGP-9 is a classic blowback operated sub-machine gun. What makes it stand apart from innumerable other weapons using this system of operation is the fact that it is hammer-fired and therefore fires from a closed bolt. The overall external impression of the gun is that of a scaled down AK, with a front and rear trunnion, a magazine well riveted to the lower receiver, and a fire control group held in place by retaining pins. Similarly, both the method of top cover retention – held in place by the recoil spring via a guide rod – and the position of the magazine release catch are as per any other AK derivative.

The charging handle is located on the left-hand side and the KGP-9 has no bolt catch. After the last round is fired, the magazine follower will block the bolt in its forward movement. This has no practical benefit without a bolt catch, and the recoil spring provides so much pressure against the follower that the magazines will not drop free and must be purposefully removed from the gun. The setup of the push-button safety is also far from ideal, as it located inside the trigger guard, forward of the trigger. In the central position the weapon is on safe; the button is pushed to the left for semi-automatic fire, and to the right for automatic fire. 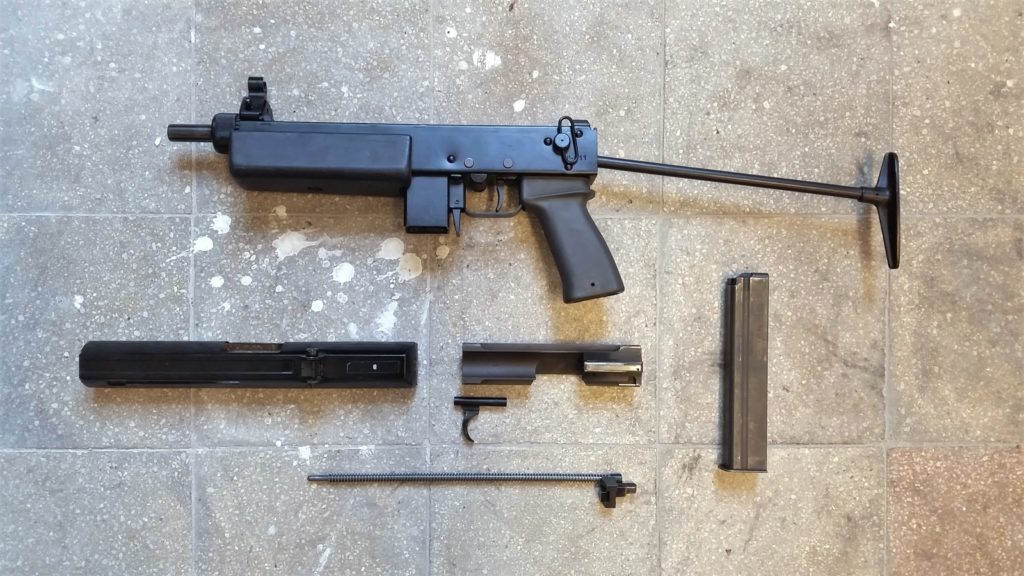 Internally, the KGP-9 exhibits some direct influence from the UZI design. The telescopic bolt wraps around the chamber and part of the barrel, reducing the overall length and providing the weapon with very good balance and remarkable stability during automatic fire. These features, in addition to the weapon firing from a closed bolt, mean the KGP-9 is a surprisingly accurate weapon in both firing modes. To provide the firearm with the ability to swap the standard barrel for a longer one, another design feature was borrowed from the UZI, with a simple barrel nut holding it in place. The longer barrel is mentioned in multiple sources, but unfortunately the author was not able to locate one and it is not mentioned in the manual. Therefore, it is likely that it was never adopted after the trials were completed. 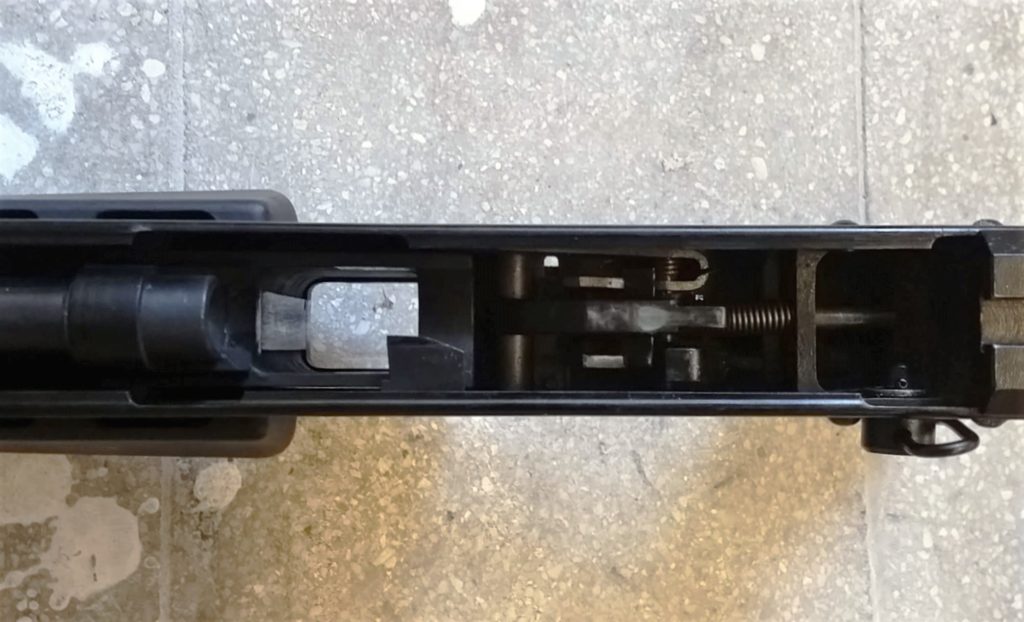 Disassembly of the KGP-9 is along the lines of an AK rifle, beginning by pushing in the end of the recoil spring guide rod that protrudes out of the rear of the top cover, and removing the latter. The recoil spring rod is held in place by a guiding piece that also locks the dust cover. With the recoil spring compressed toward the muzzle, this can be removed from the firearm by pulling it out of the bolt. Next, the bolt can be moved rearwards, and the barrel nut can be unscrewed to remove the barrel. Reassembly is performed in reverse order. The rear end of the barrel is keyed so that it can only be assembled in the correct manner, with the thread of the barrel nut holding it in place. After mounting the top cover, the user encounters the next design flaw. The rear sight is mounted directly to the top cover, and therefore the gun must be zeroed each time it is reassembled. The simple sights are set up as two U-notch fold-up blades at the rear for 50 m and 150 m respectively, with an adjustment for windage. The front sight is more or less a direct copy of the FÉG AMM rifle front post, which can be adjusted for elevation by screwing it in or out of the mounting block. At least two stock designs are known.

The FÉG KGP-9, with its combination of flaws and interesting design features, was a victim of the times of its development and production. Struggling with fluctuating political and economic backing and beset by significant quality problems in the early stages, the whole design was set up for failure from the beginning. Other tried and tested designs became available to the Hungarian services looking for compact firepower, and the chances of export were slim from the beginning. With no further development, and despite a surprisingly long service life of nearly twenty years, the KGP-9 remains a side note in the history of the sub-machine gun. 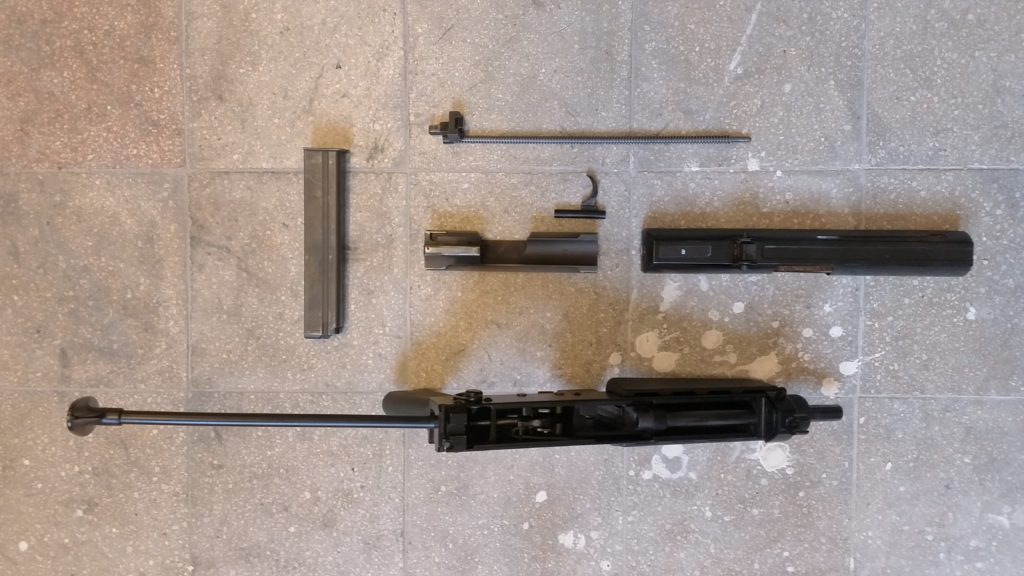