Recent photos posted on social media channels  have illustrated the proliferation of an unmarked variant of the Russian TM-57 AT blast mine, as well as an escalation in the sophistication of improvised explosive devices (IEDs) in the Yemeni conflict. This cache of munitions (documented here in early August) is observed to contain over 150 examples of the widely-exported Soviet era TM-57 anti-tank blast mine with an MVZ-57 or MVM type pressure fuze. The TM-57 contains 6.34 kgs of TNT and is capable of producing harmful blast effects to personnel at an estimated 241 meters. These mine and fuze combinations are readily disassembled by hand by trained personnel and many of the mines pictured could be assumed to have been recovered by locals or former fighters.

While the prevalence of these mines is concerning, the identification of IED types previously undocumented in Yemen may be of greater concern. At least 23 IEDs resembling Misznay–Schardin platter charges or explosively formed penetrators (EFP) are included in the photos. Simulated rocks constructed out of wood, foam materials, and paint used to camouflage IEDs have been recently documented in Iraq. Similar assemblies are visible in limited quantities. These IEDs and camouflaging techniques indicate a  comparatively high level of sophistication on the part of the Houthi forces, demonstrating an ability to employ IEDs effectively and to manufacture or import materials. 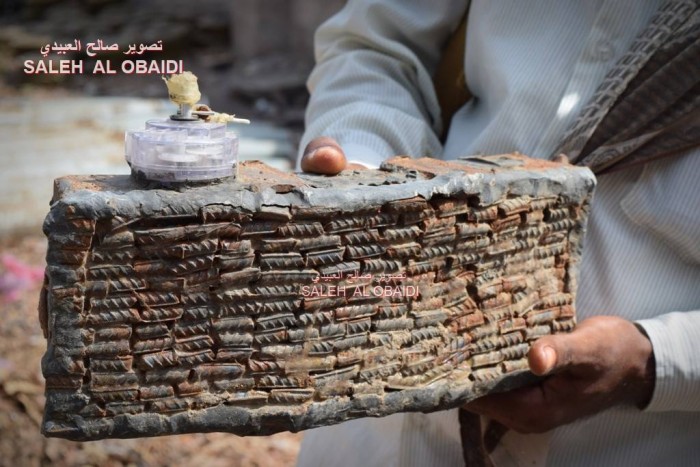 A directional anti-personnel IED featuring bar fragmentation material is also pictured in detail (see image above), the design of which is similar in size and dimensions to the Russian MON-90 or Yugoslavian MRUD mines. This IED incorporates a washing machine timer, most likely as an arming delay device, another technical development that has been a staple of Iraqi IED designs for a decade. The timer also appears to have been previously covered with foam, consistent with the practice of camouflaging IEDs as rocks.  These techniques were employed around Baghdad and in other areas of Shi’a milita activity during the US occupation of Iraq. The practice of camouflaging IEDs within simulated rocks has also been employed by Hezbollah, from the mid-1990s to present day. Both Hezbollah and Iraqi Shi’a militias, as well as Houthi forces in Yemen, have received support from the Iranian IRGC. Similar types of directional fragmentation devices have been observed in Iraq and Afghanistan, and now Yemen, and will be covered in more detail in an upcoming ARES Research Note.