A video posted to YouTube on 29 October 2015 shows two Russian-made MRO-A rocket launchers and a Soviet or Russian RPO-A recoilless weapon. According to the video, the weapons were captured by Ajnad al-Sham from Syrian government positions near Skaik village, in Hama governorate. Markings on one of the MRO-A launch tubes indicate that it was produced in Russia in 2005 (see below). The MRO-A is a disposable, single-shot 72.5 mm rocket launcher, which shares similarities with the larger 93 mm RPO family of recoilless weapons. MRO stands for Malogabaritnyy Reaktivnyy Ognemet (‘small-sized rocket-propelled flamethrower’). Both MRO and RPO series weapons are referred to by Russian sources and in Russian doctrine as “flamethrowers”, with three variant warheads produced. ARES Researcher Yuri Lyamin has previously documented RPO-A systems in Syria. 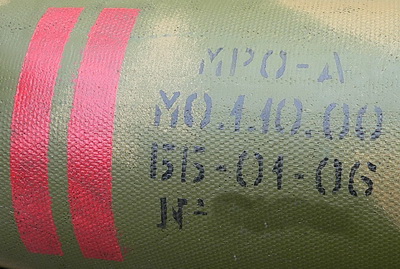 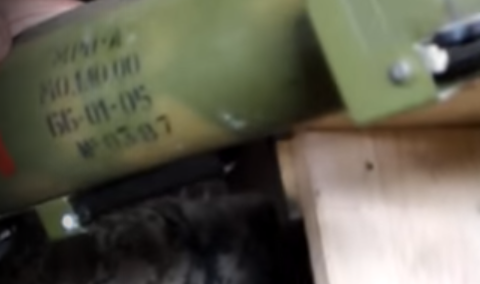 The MRO-A carries a thermobaric warhead and is distinguishable by the two short red stripes towards the firing end of the weapon, as seen in the picture above. The MRO-D variant carries a white phosphorous (WP) smoke warhead, identifiable by one red stripe, and the MRO-Z an incendiary warhead marked by a single yellow stripe. The RPO series is available in the same variants, featuring the same markings and designation suffixes.

MRO-A rocket launchers were produced in Russia after the fall of the Soviet Union, and are not known to have been exported. ARES has previously documented MRO and RPO series weapons in the hands of separatist fighters in Eastern Ukraine. ARES has been tracking the presence of modern Russian arms and munitions in the hands of pro-Assad forces in Syria, with more than a dozen systems identified to date.

Special thanks to Yuri Lyamin.