Update 151106: Another Twitter post from yesterday shows a brief video of materiel allegedly captured by fighters aligned with Jabhat al-Nusra in Syria. In addition to the Sadad 102 thermal imager mentioned below, other items seen include mortars, what appears to be an Iranian SPG-9-type recoilless gun, an Iranian AM50 anti-materiel rifle, a DShKM-type heavy machine gun, and assorted small and medium calibre ammunition.

In August ARES documented the appearance of Iran’s RU-series thermal weapon sights on the Iraqi battlefield, and their use by pro-government militias. Now, additional imagery made available via Twitter appears to show them in Syria as well. This adds to the growing body of evidence documenting the surge of international support for the Assad government following significant opposition and insurgent gains through the summer.

Imagery posted by an unofficial Jabhat al-Nusra account on 2 & 3 November claims to show equipment captured from from an unnamed “Shi’a militia” in the Aleppo countryside. This includes three RU60G sights and one RU120G. The names correspond to the size of their objective lens (60 and 120 mm, respectively). Imagery of the same cache made available elsewhere also shows a much larger tripod-mounted imager that closely resembles Iran’s Sadad 102. Other items are also present, including a pair of Vectronix VECTOR 23 laser rangefinding binoculars and an Iranian AM50 (Sayyad-2) .50 BMG (12.7 x 99 mm) anti-materiel rifle. 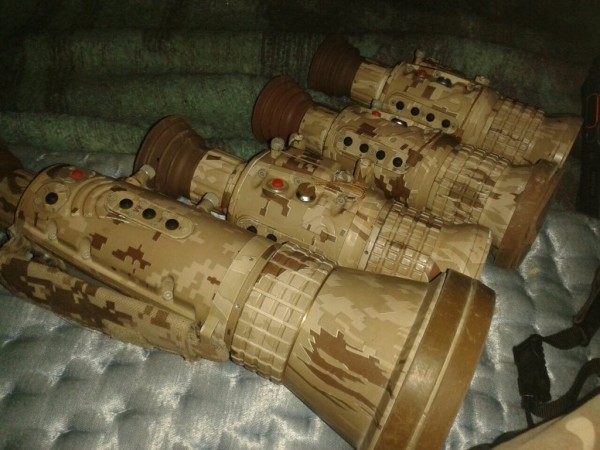 RU-series sights are used for medium and long-range engagements with precision small arms (e.g. SVD, AM50), and light weapons (e.g. SPG-9)¹. The Sadad, on the other hand, is used for long-range static surveillance, and is often described as an element of border-security systems. The RU-series are built by Rayan Roshd, a private company with uncertain links to state industry. They specialize in electro-optical systems, producing remote weapon stations, missile seekers, and both handheld & airborne imagers. The Sadad is built by Iran Electronics Industry (IEI), a direct subsidiary of the Iranian Ministry of Defense. 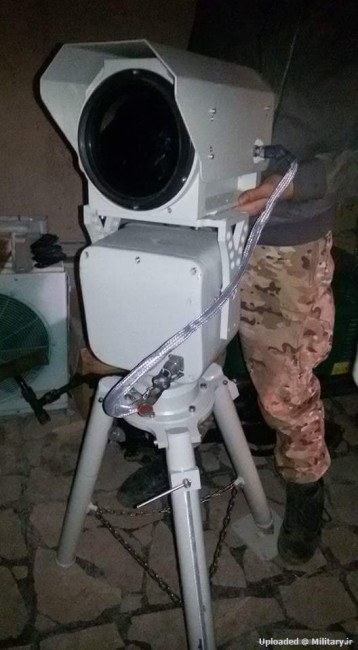 These captured arms mark the intensifying effort of Assad’s allies – including Iran – to bolster depleted government forces who had been left reeling after successive insurgent advances earlier this year in the country’s northwest. Although Russian airstrikes are the most visible aspect of this effort, it is the militias from around the region organized and equipped by Iran that are providing the necessary manpower to retake and hold ground. In the area around Aleppo these include the Syrian NDF; Lebanese Hezbollah; and Iraqi groups like Kataib Hezbollah, Harakat al-Nujaba, and Kataib Seyyed al-Shohada.

¹ There is limited evidence of the latter use. Sudan’s Military Industry Corporation offers a copy of the RU60G, which they show alongside an SPG-9 in a promotional video, but this has yet to be documented outside of Sudan.

One thought on “Iranian RU-series thermal weapon sights in Syria”