This post accompanies the fifteenth in a series of collaborative videos produced with ARES Researcher Ian McCollum, who also runs the Forgotten Weapons blog and YouTube channel. Using access to unique collections facilitated by ARES, this series of videos will examine a range of interesting weapons over the coming months. Each video will be accompanied by a blog post, here on The Hoplite, and supported by high quality reference photographs. – Ed.

The manually-operated, integrally-suppressed VP9 pistol by B&T AG (formerly Brügger & Thomet) came as something of a surprise when it was launched in 2014. It is an intriguing contemporary civilian take on a Second World War British design for a military covert operations pistol. The example pictured here and seen in the accompanying video was acquired by the Royal Armouries, whose collection includes more examples of the original Welrod and Welwand pistols than any other in the world. This was, in part, the rationale for its acquisition. As befits its intended veterinary role, the pistol came supplied in a discrete briefcase with interchangeable standard and ‘training’ suppressors, spare magazine and rubber wipes, screwdriver, suppressor disassembly tool, cleaning tools, and a clamp-on Picatinny rail adapter for any accessories that the user might deem appropriate (most likely a flashlight).

The basic design is pure Welrod, with tubular body, ported barrel, manually operated twin-lugged cock-on close rotary bolt, and the detachable magazine serving as the pistol grip. The trigger remains a simple push-rod that directly impinges upon the sear in order to release the internal striker. Most importantly, it retains the basic design of the Welrod suppressor as well, with a stack consisting of metal baffles and rubber wipes. Wipes are rarely used by modern-day suppressor makers, but can still be useful when striving for the quietest report possible, as in this case. As per the Welrod, the ported barrel allows sufficient drop in pressure to decelerate and render the bullet subsonic, eliminating the supersonic ‘crack’ that would otherwise be produced. The ‘training’ suppressor is a more modern machined and ported design, but offers a substantially reduced sound suppression capability, being intended for practice without having to clean and/or service the primary unit. The VP9 is chambered for the 9 x 19 mm calibre, a characteristic again shared with the later Welrod, which had originally been designed in .32 ACP for maximum sound suppression potential.

There are some significant changes embodied by the B&T redesign, however. The VP9 is considerably shorter, more compact and lighter (see below) than the Welrod; the latter being 360 mm long & 1.5 kg in weight. Due to the truncated overall length of the gun, the barrel is also significantly shorter than the 3.74 inches of the .32 Welrod at just under two inches. The scoop on top of the pistol behind the breech has been significantly enlarged, presumably to reduce weight and possibly aid in ejection. Whereas the only synthetic material found on the Welrod was its rubber grip sleeve, the VP9 makes more extensive use of modern polymer, which comprises the grip frame, trigger and grip safety shoes, magazine release and the magazine casing. The trigger guard is sheet steel, all other components being forged or machined steel. The magazine release has been relocated from a lever inside the trigger guard (or the spring-catch on the back of the magazine in the original model) to a push-button on the left side of the grip. This is both safer and more ergonomic, albeit the button does not sit under the first pad of the thumb as on most modern pistols; this is not a weapon intended for swift reloads under pressure. The grip safety is now a polymer button rather than a sheet metal lever and must be depressed in order to retract the bolt. The radioactive Radium painted night-sights are gone, replaced by modern Glock-style white dot and ‘U’-shaped markers. The front sight is located at the breech as in the later (9 mm) Welrod, rather than on the end of the suppressor as in the early (.32 ACP) pattern. 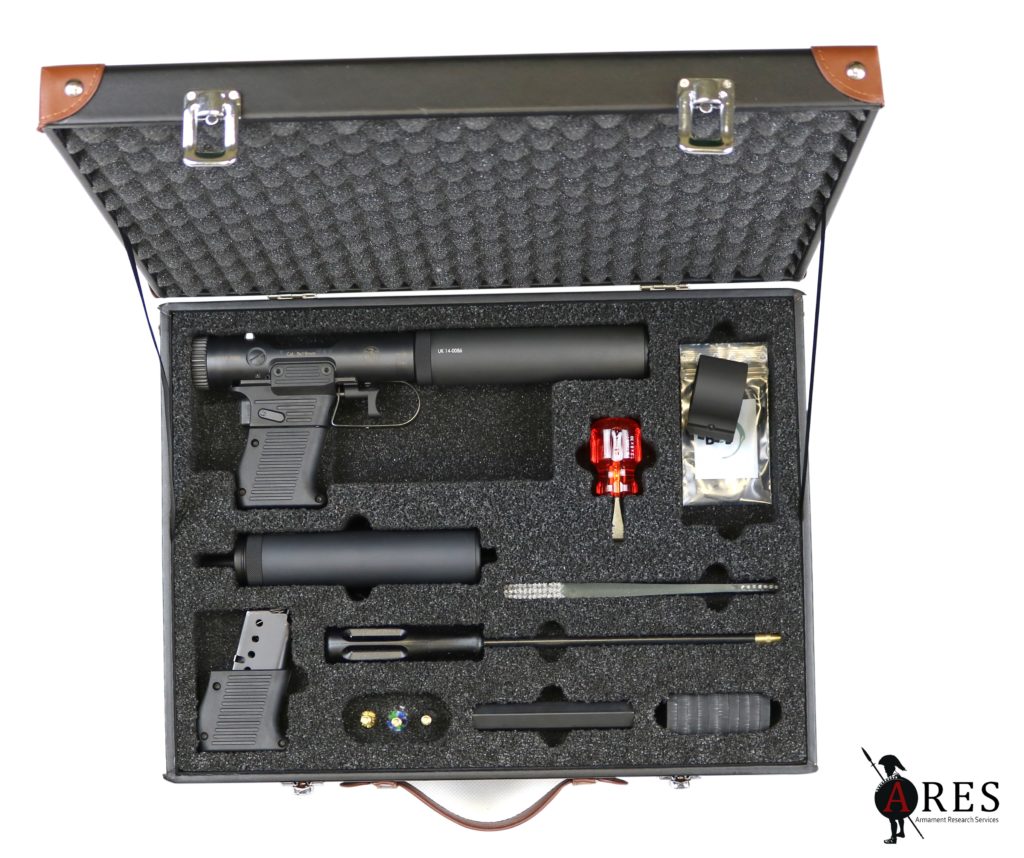 Despite the family resemblance and the tactical potential of the pistol, there is no indication from B&T that the VP9 is intended for military or law enforcement purposes. Indeed, the original niche role of the Welrod is probably better served today by other weapons capable of delivering greater firepower more rapidly. The VP9 is likely to actually find use by vets and others with a need to humanely and quietly dispatch wounded or sick animals. It would nonetheless be interesting to compare the capabilities of the two pistols given the improvements made but also the closeness of the two designs.

This YouTube video suggests a 120.5 peak decibel level for the VP9. Although American O.S.S. testing produced a figure of just 73 dB for the Welrod, this was not carried out with modern equipment (by way of comparison, an unsuppressed .32 ACP pistol produced just 105 dB when tested by the O.S.S.). Two post-war tests (1968 and 2002) show that the .32 Welrod was, like the VP9, capable of 120 dB, or a noise reduction of around 32 dB. This in turn is comparable with the best of the modern detachable suppressors when run ‘wet’, although the VP9 achieves this in a form factor comparable to an unsuppressed compact pistol.

The Armouries have purchased two examples of the VP9, and ARES hopes in future to test-fire one of them alongside an original Welrod.

Further Reading
B&T’s catalogue for the VP9
A Small Arms Defense Journal article, based upon a pre-production sample
See Anders Tuygun’s site and Forgotten Weapons for more on the Welrod