Two interesting videos have surfaced from the area around the town of Kafr Zita, in the northern part of Syria’s Hama governorate. In recent days, heavy fighting has raged between government forces and armed opposition groups in the area, with the Syrian Arab Army employing a range of conventional and rocket artillery. Video evidence appears to indicate that the 9K58 Smerch (Смерч; ‘Tornado’) 300 mm multiple-launch rocket system (MLRS) was in use. The 9K58 is a 300 mm MLRS originally designed in the USSR, and capable of firing several different rockets, including cargo rockets deploying submunitions. The presence of this system will come as a surprise to many observers, as the 9K58 has not been documented in Syrian service.

The video above, posted on 12 February, shows the remnants of a 300 mm 9M55K type cargo rocket fired from the 9K58 Smerch, near Kafr Zita. The distinctive nosecone and bursting charge components make the munitions readily identifiable as Soviet cargo rockets. The image below, compiled by Eliot Higgins of Brown Moses Blog, gives another view of the rocket. The second image is of the nose cone of the rocket. 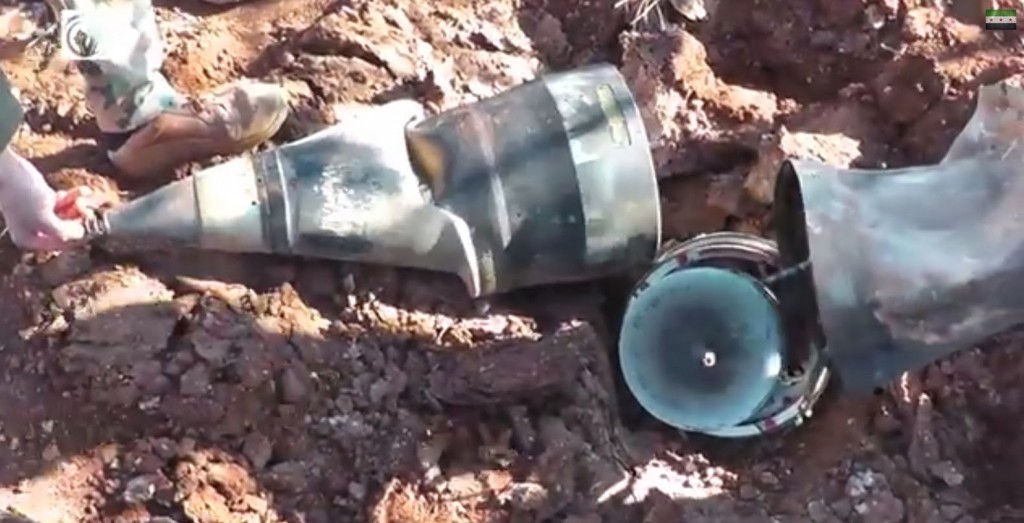 Some observers have suggested the munition above is a 220 mm 9M27K1 rocket for the 9K57 Uragan MLRS, which Syria is widely believed to possess. However the frame posted below clearly shows the rocket is of the 9M55K series. Firstly, we can see Cyrillic lettering, indicating that the missile was made ​​in the Soviet Union or Russia. Secondly, the remnants of the rocket’s flight control system are clearly visible. This system was installed on Smerch rockets and provides inertial guidance to correct the rocket’s flight trajectory. This system was not installed on Uragan rockets. A technical diagram of rocket nosecone components for the 9K58 series MLRS is presented below. 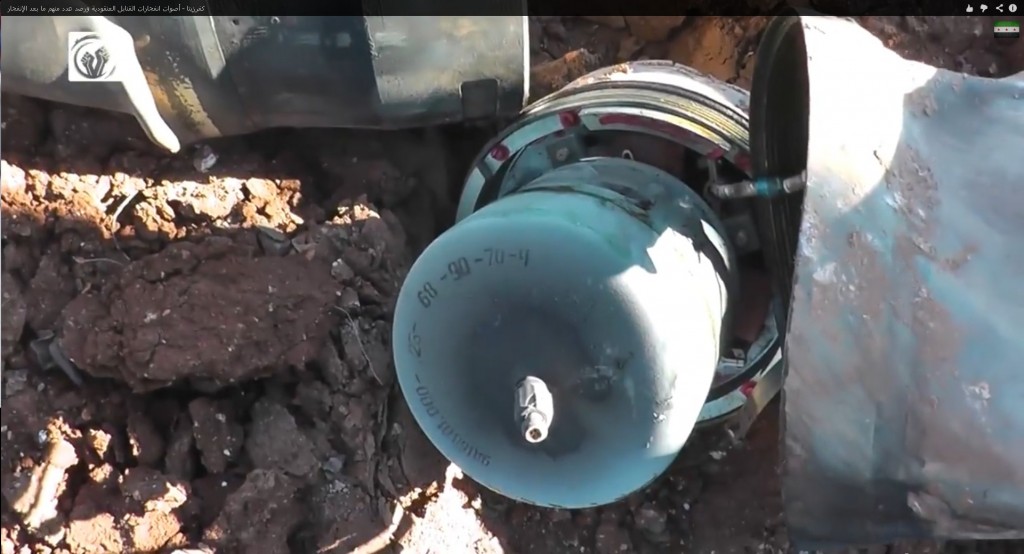 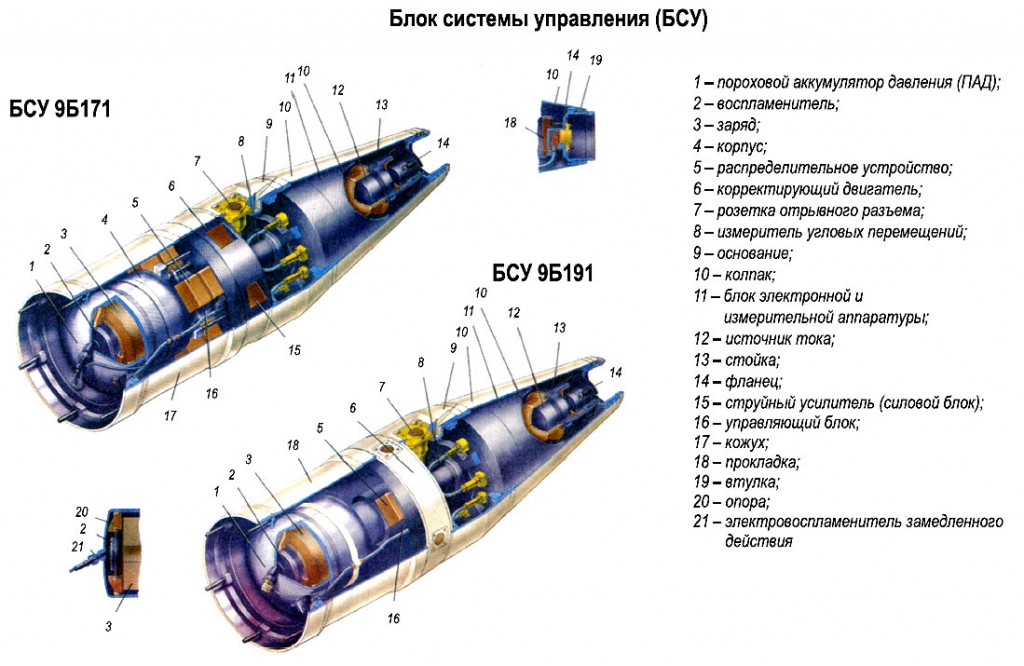 The second video, below, shows an unexploded 9N235 fragmentation submunition. These submunitions are deployed by 9M55K rockets, fired from the 9K58 Smerch. Whilst these submunitions are also deployed by 220 mm 9M27K1 rockets for the 9K57 Uragan MLRS, the proximity in time and location (also in the Kafr Zita area, and posted just two days later on 14 February) makes it likely this submunition was deployed from a 9M55K rocket. The presence of 9N235 submunitions likely also indicates that the cargo rockets observed in the first video are 9M55K rockets, rather than one of the other cargo rockets available for the Smerch (see Technical Details, below). Markings on the submunition pictured below indicate it was produced in 1991. 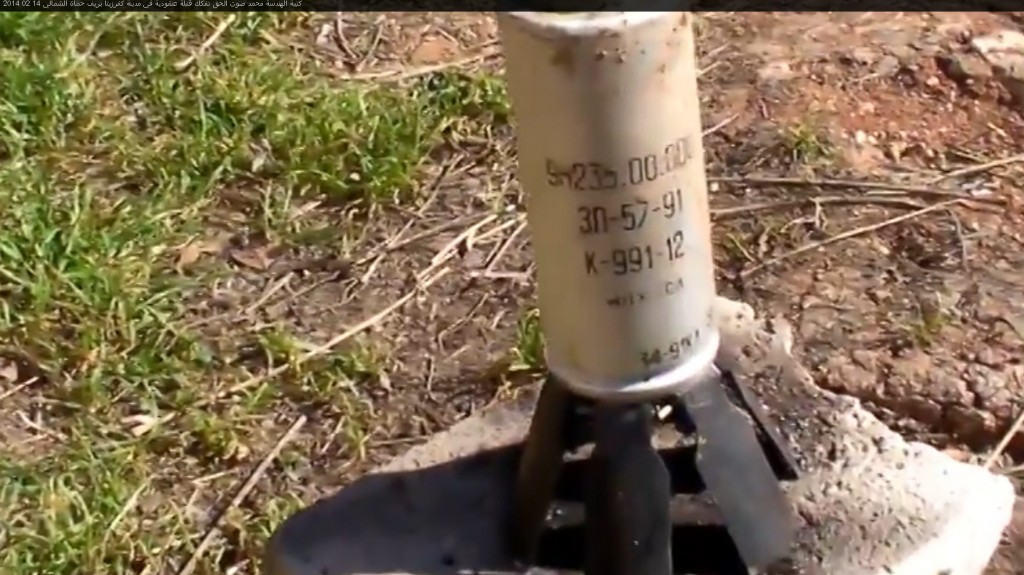 It is clear that 9M55K cargo rockets carrying 9N235 fragmentation have been used in Syria. As mentioned, it is not clear how Syria obtained these munitions, nor the systems required to fire them. Whilst Russia is the most likely origin of the systems in Syria, other operators cannot be ruled out as a possible source. These include Algeria, Belarus, Ukraine, and Venezuela. 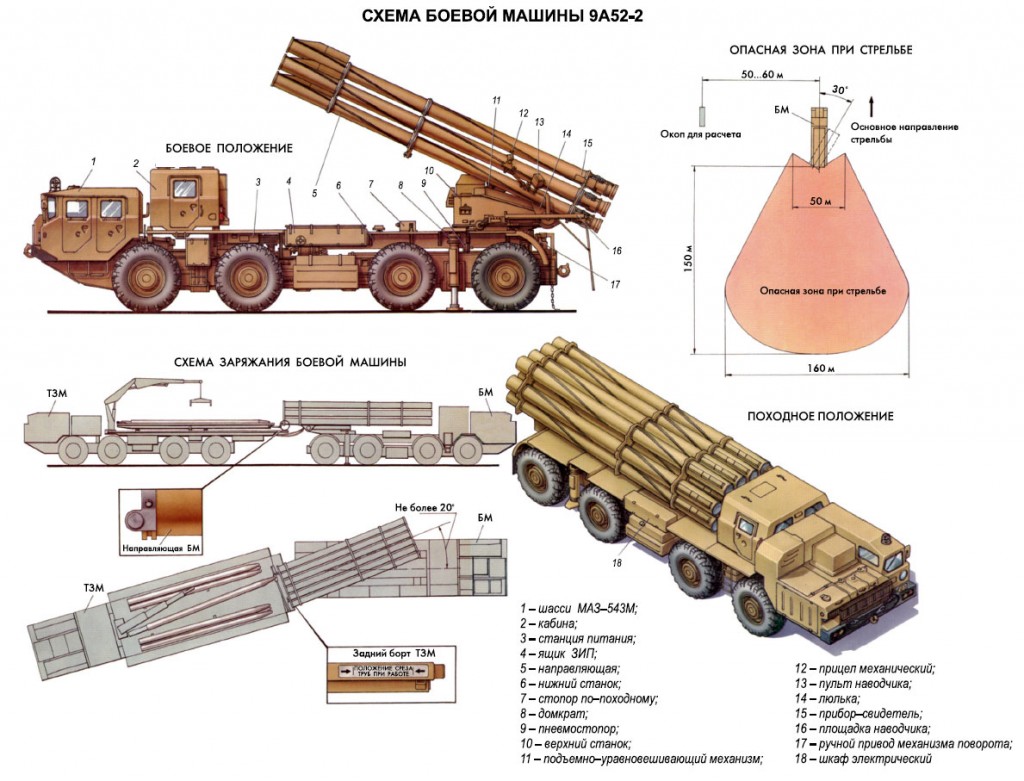 The 9M55K cargo rocket with 9N235 fragmentation submunitions is designed to engage concentrations of infantry and light vehicles in open terrain or light cover.

Our thanks to Alexander Diehl for his assistance. Technical specifications taken from Splav State Research and Production Association FSUE’s website. Technical drawings from here.

One thought on “9M55K Cargo Rockets and 9N235 Submunitions in Syria”