Authored by former Russian army officer and small arms historian Maxim Popenker, with ARES Director N.R. Jenzen-Jones, Arms & Munitions Brief No. 2 gives an overview of the GM-94’s development history, technical characteristics, and employment history. Some excerpts from the full publication can be found below:

Development of the GM-94 grenade launcher began in 1993, under the guidance of Vasilij Gryazev, chief designer of the Instrument Design Bureau (Konstruktorskoye Byuro Priborostroyeniya; (Конструкторское Бюро Приборостроения; KBP), in Tula, Russia. Prior to producing the GM-94, KBP was independently developing a new 43 x 30 mm thermobaric projectile for urban combat. The driving design concept for this new cartridge was to achieve a limited lethal radius, which would limit collateral damage and allow the user to fire such rounds at almost point-blank range.

The GM-94 is a manually-operated (pump-action), hand-held, magazine-fed weapon. It feeds from an integrated tubular magazine, located above the rifled barrel. The magazine contains three rounds and can be reloaded through the top-opening loading door above the receiver. The receiver is made from stamped steel, with a fixed, machined steel breechblock. Reloading is achieved by sliding the barrel forward to open the breech, then rearwards until it is locked to the receiver. Fired cartridge cases are ejected downwards, allowing the GM-94 to be fired from either shoulder.

In Russian military service the GM-94 is designated the ‘LPO-97’ (Legkiy Pekhotnyy Ognemet; Легкий Пехотный Огнемет; ‘light infantry flamethrower’). The LPO-97 is formally classified as a flamethrower because the Russian army considers most hand-held thermobaric weapons to be ‘flame weapons’, despite the fact that thermobaric munitions, including the VGM93.100 projectile, primarily achieve lethality through blast. In law enforcement use the weapon retains the designation ‘GM-94’.

The GM-94 is known to have been exported to Kazakhstan, where it is in service with the Kazakhstani paramilitary police tactical unit Sunkar (‘Hawk’) (Ryan, 2009). It has also been documented in the hands of non-state combatants in Libya during the overthrow of the Gaddafi regime in 2011. Photo 17 shows a Libyan rebel holding the weapon aloft. Finally, the GM- 94 grenade launcher was also observed in use during the Russian seizure of the Crimean peninsula. At least two examples were documented, including one weapon fitted with an EOTech type holographic weapon sight (Jenzen-Jones, 2014). Photo 18 shows unidentified combatants (likely Russian military) armed with two GM-94 grenade launchers. 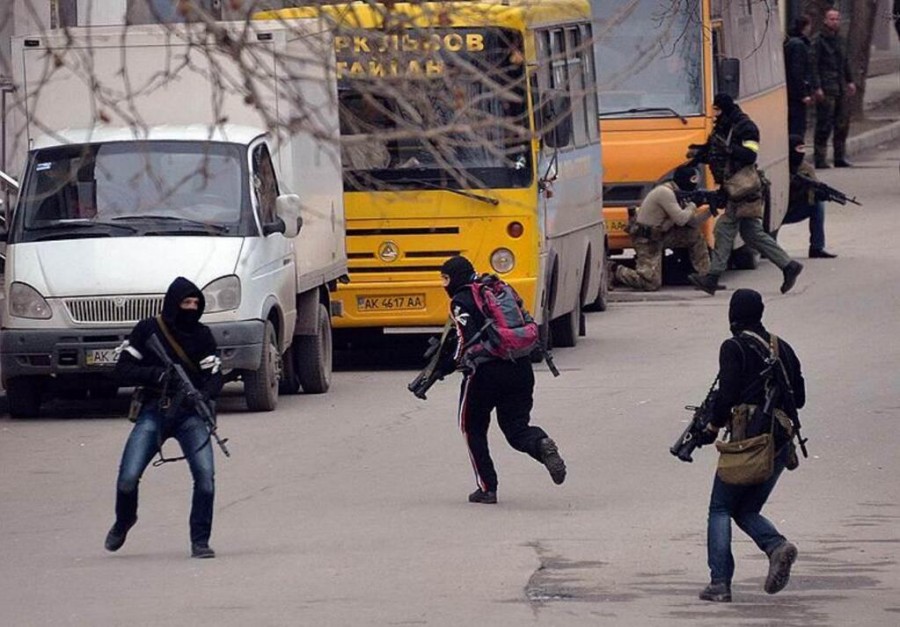 The full Arms & Munitions Brief can be read here. For other ARES publications, please visit our Publications page.