This post accompanies the sixteenth in a series of collaborative videos produced with ARES Researcher Ian McCollum, who also runs the Forgotten Weapons blog and YouTube channel. Using access to unique collections facilitated by ARES, this series of videos will examine a range of interesting weapons over the coming months. Each video will be accompanied by a blog post, here on The Hoplite, and supported by high quality reference photographs. – Ed.

The ‘Besal’ or ‘BESAL’ was, in essence, a simplified derivative of the British Bren, itself a variant of the Czech ZB-26 light machine gun (LMG). A British Small Arms Committee (SAC) minute of June 1940 established the requirement of a ‘Garage Hands Gun’ or what is typically referred to today as a ‘last-ditch’ gun (see Grant, 2013). However, this was not in fact ‘last-ditch’ at all, but an attempt to get ahead of the manufacturing curve and accelerate production of the LMG, which at that time was the very basis of British infantry section (squad) firepower. The standard .303 cartridge would remain, and the design would retain the barrel and magazine of the Bren, which of course were already plentiful in the supply chain. As Grant notes, it was even suggested that spare Bren barrels could be taken from stores to get the new gun into production as fast as possible.

The War Office contract for the prototype guns was let to experienced company Birmingham Small Arms (BSA) in 1941. The lead designer was Harry Faulkner, who had already produced the ‘Besa’ Armoured Fighting Vehicle (AFV) machine gun. BSA delivered the first prototype of the new gun by March 1942. This retained a Bren-style cocking handle, but was further simplified in August 1942, as detailed below.

Description
The weapon is substantially fabricated from sheet metal pressings that are welded together. As a hand-built prototype of what would have been a rather crude weapon, the Besal is quite well finished, with the welds being largely ground flush and finished smooth and sporting a deep blue protective coating. Despite the intent to utilise Bren barrels in production, the barrel on the prototype is proprietary, with a built-in tubular flash suppressor, a front sight/gas block clamped around the gas port, and a carrying handle. There is no adjustable gas regulator as on the Bren. The rear sight pivots fore and aft to switch between its 300 and 500 yard apertures. The barrel is detached by cocking the weapon and rotating the removal lever rearward, allowing the user to pull it off the weapon forwards. 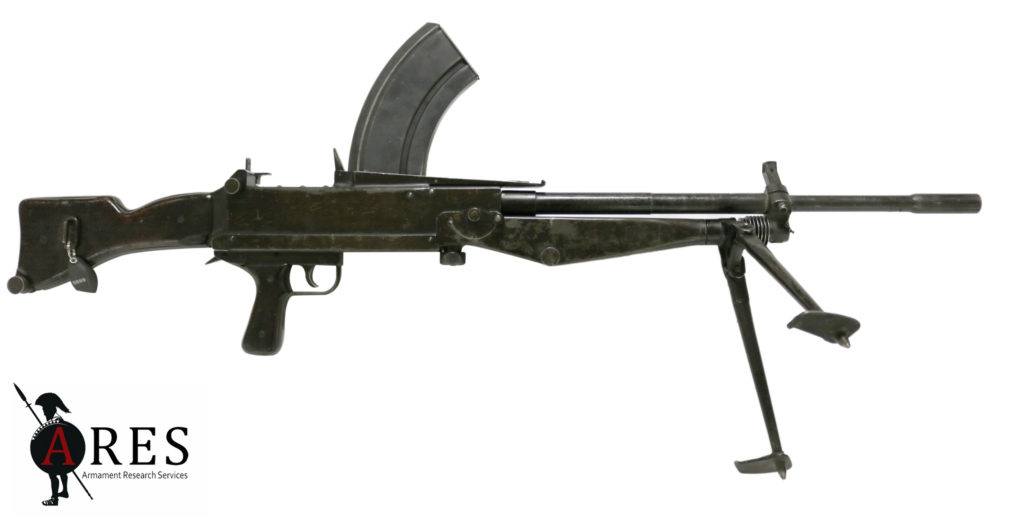 Disassembly, as the video shows, is fairly straightforward. An unusual knurled plug under the barrel releases the working parts for removal out of the rear of the receiver, once the butt-stock has been detached by means of a simple trumpet-headed cross-bolt. The dust cover is a hinged flap that cleverly locks in place under the magazine catch when no magazine is fitted. The bipod is a heavy machined unit with a very positive deployment action. Despite extensive use of sheet metal, the weapon is close in weight to the Bren. Aside from the hefty bipod, the stampings are relatively thick, the barrel heavy, and no lightening cuts are made to the machined components. The bolt carrier group is based upon the Bren, but redesigned for a minimum of machining operations, giving it a bulky, square appearance. The weapon has no conventional cocking handle, instead being cocked by means of the sliding pistol grip. This must be released with a rather awkwardly-located lever at the top of the backstrap, before sliding the unit forward to collect the bolt group, and then dragged backward against spring pressure to hold the bolt to the rear on the sear. The bolt is locked with a vertically acting bar at the rear of the bolt carrier. There is no provision for semi-automatic fire. Furniture is spartan, with a pair of wooden grip panels and a matching set of butt-stock panels cladding the hollow metal butt-stock.

Why ‘Besal’?
As Ian notes in the video, there is no definitive explanation of the acronym ‘BESAL’. However, this is because the name is rooted in period British slang and is not really an acronym. ‘Beezer’, ‘Beesa’ or ‘Besa’ were common phonetic renderings of the company acronym ‘BSA’; hence the name applied to the company’s AFV/tank gun (a copy of the Czech ZB-53). Due to the modern assumption that it is an acronym, this is frequently written as ‘BESA’, but should more properly be rendered ‘Besa’. This explains ‘Besa’, but for ‘BESAL’ some educated guesswork is required. With a new machine gun design on the books and a precedent for incorporating the company name in a gun’s designation, the most likely explanation is that BSA opted to add ‘Light’ to ‘Besa’ to arrive at ‘Besa Light’ (machine gun), or ‘BesaL’ for short. The ‘L’ would thus differentiate the gun from the existing ‘Besa’ AFV/tank gun. ‘BesaL’ being rather awkward to look at, ‘Besal’ seems to have been the preferred rendering (although, again, ‘BESAL’ remains common today).

Nonetheless, the Besal was renamed ‘Faulkner’ after its designer in January 1943. Grant suggests that the renaming was a move to distance the LMG from its AFV MG stablemate, ‘Besal’ and ‘Besa’ being too similar to one another.

The Bren Soldiers On
Unlike the Besa, which was formally adopted and saw service on armoured vehicles, the Besal did not see serial production. By 1943 supply worries over the Bren had eased, and along with them, the need for the Besal/Faulkner. It never entered production and instead the Bren continued into Marks III and IV. The Bren was retained post-war in the L4 variant chambered for 7.62 x 51 mm (which itself passed through several variants), finally being withdrawn completely c. 1991, nearly half a century after its potential replacement had been ‘binned’.

Special thanks to Neil Grant for his assistance with this video.