The Chang Feng sub-machine gun (SMG)—known in its latest iteration as the ‘CS/LS06’—is in service with Chinese law enforcement and paramilitary personnel, as well as specialised units from other nations. The design is notable for its 50-round helical magazine, and is often issued with a suppressor. Development of the Chang Feng SMG began in the mid-1990s by the Chongqing Chang Feng Co. Ltd. (重庆长风机器有限责任公司), based in the southwestern Chinese city of Chongqing.

The weapon was conceived by veteran designer Qing Shangsheng, under the auspices of the Chang Feng Military Products Research Institute (长风公司军品研究所). In addition to leading the design team for the QSZ-92 pistol, Mr. Qing had previously worked on a number of other small arms projects, including the Type 64 7.62 × 17 mm pistol, Type 67 7.62 × 17 mm suppressed pistol, Type 80 7.62 × 25 mm sub-machine gun, Type 56-2 self-loading rifle, both 7.62 and 5.45 light machine guns (‘squad automatic weapons’), and a variety of sporting pistols, a signal pistol, and even a derringer. Prior to working on the CF05, he had already secured a patent for a high-capacity quad-stack, double-feed magazine for the Type 56-2. 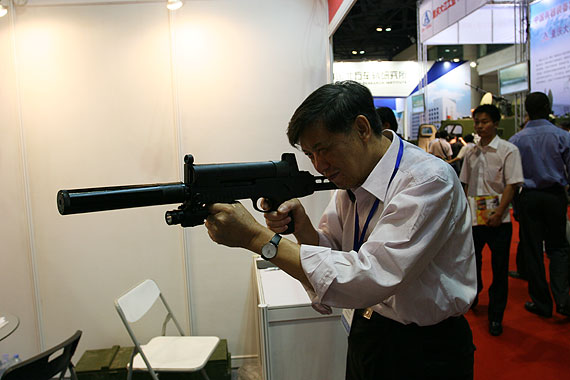 According to 2006 interview with the designer, he initially developed the concept in secrecy between 1993 and 1994, and did not share it with the factory manager until 1996. Four main series of prototypes were then developed. The first prototype used the weapon’s helical magazine to form part of the butt-stock, fitted with a removable rubber butt-pad. Versions of Prototype I were developed with different burst functions; Prototype I-1 had a two-round burst mechanism, and Prototype I-2 had a three-round burst mechanism. The second prototype saw the magazine moved so that it sat above the barrel and introduced the closed-bolt blow-back operation. Prototype II was fitted with a telescoping stock. Both prototypes I and II were chambered for 5.8 × 21 mm.

It was determined that export sales were to be a priority for this weapon, and the weapons were updated to chamber the internationally popular 9 × 19 mm cartridge. At this point, the program adopted the designation ‘QC-9’ for the guns. As well as the new chambering, Prototype III saw experimentation with under-folding butt-stock designs. Prototype III-1 and III-2 have slightly different folding stock configurations. Prototype III-2 also introduced an optics mounting capability. 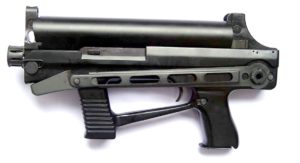 Prototypes I, II, and III were all able to feed from a secondary feed device—a detachable box magazine housed in the pistol grip of the gun. These were QSZ-92 pistol magazines, which are produced in both 5.8 × 21 mm and 9 × 19 mm versions. A separate magazine release, located on the pistol grip, is visible in the first three prototype series. In the first prototype, it was possible to inadvertently introduce a feeding issue with both magazines fully seated. In Prototypes II and III, the box magazine could not be fully seated until all rounds have been fired from the helical magazine, tripping a switch.

By Prototype IV, the design had returned to using telescoping butt-stock, and the alternate box magazine feed system was removed. A magazine release button is still seen on the pistol grip of all prototype weapons. In Prototypes II and III, the forward and rear pistol grips are connected via a bridging structure. Prototype IV-1 also has this ‘bridged’ configuration, however by Prototype IV-2, the furniture design is essentially finalised and is close to the production gun. The prototypes had a cleaning kit stored in the front pistol grip, which was also dropped from production guns. By the last prototypes, the translucent brown helical magazines appear to have been introduced, and translucent white magazines followed in early production guns. 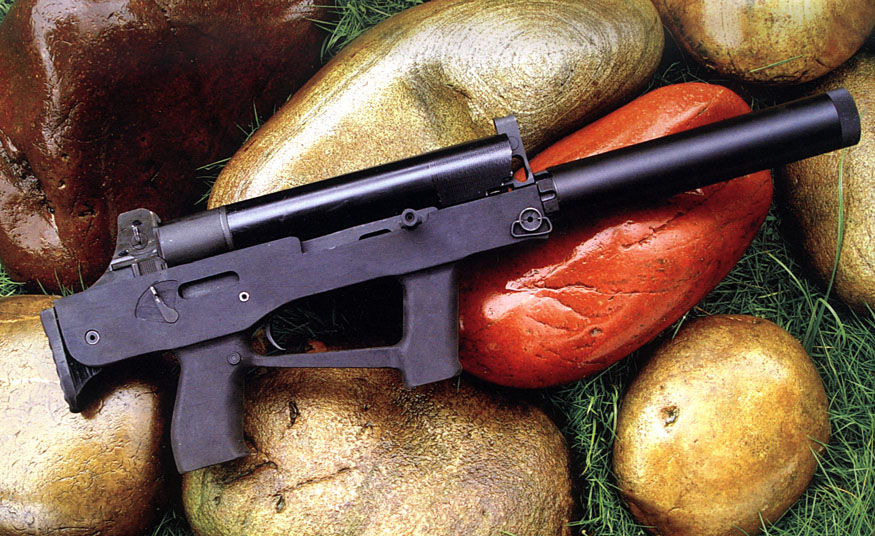 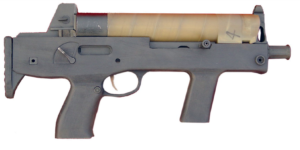 A number of further changes were made as the QC-9 progressed through development. The weapon underwent trials in 2004, and issues with extractor strength, feeding issues, trigger issues, and the fire selector were resolved. The weapon was finally approved for serial production in May 2005. The production version of the weapon, now designated the CF05, was publicly showcased at the first annual China Exhibition on International Police Equipment and Anti-Terrorism Technology and Equipment (CIPATE) on 10 May 2005. 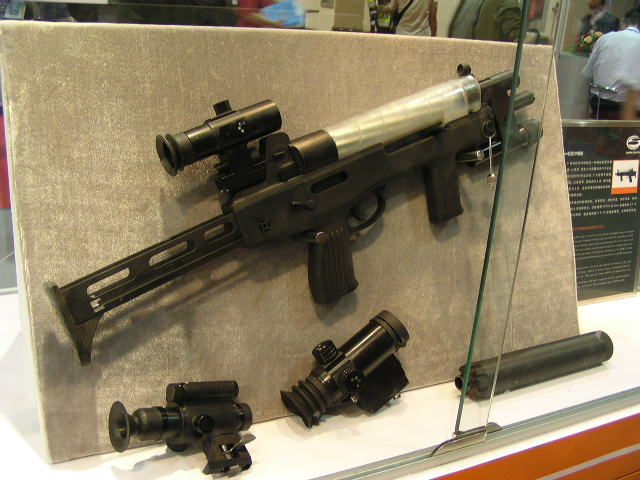 In 2006, the export variant of the weapon was approved, and the designation CS/LS06 was applied. Export versions of the weapon have occasionally been marketed as the Type 06, but CS/LS06 remains the most common name. ‘CS’ likely stands for ‘China South’, as in ‘China South Industries Group’, which included Chang Feng amongst its subsidiaries. This designation is seen on the title page of an English-language manual from the mid-2000s, which was intended for the export version of the gun. It has been suggested by several observers that ‘CS06’ is the designation for the firearm, whilst ‘LS06’ is the designation for the suppressor. Not only is there no evidence to support this claim, ‘CS/LS’ designations are applied to other export sub-machine guns without suppressors. Chang Feng merged with Jian She several years ago, and so the ‘CF05’ designation is unlikely to be used again.

The Chang Feng design is a hammer-fired, blow-back operated sub-machine gun chambered for 9 × 19 mm, firing from a closed bolt, and feeding from a 50-round helical magazine. The design uses telescoped bolt which wraps around the barrel when in battery. At the end of its rearward travel, the bolt is stopped against the rear of the barrel assembly, rather than the receiver. The polymer receiver features a collapsible stock and the barrel is threaded to accept a suppressor, which is typically supplied with the gun.

The CS/LS06 features a combined fire selector/safety, which allows for safe (B), semi-automatic (D), and automatic (L) modes to be selected.  The selector can be removed like a ‘key’ to the gun, locking it in the safe position. A three-position aperture sight is marked for 50 (‘5’), 100 (‘10’), and 150 (‘15’) metre engagement ranges. The stock is extended from the collapsed position simply by pulling it rearward. It is collapsed by pressing in the butt-stock latch on the left-hand side of the weapon. Detailed disassembly is quite complex, but a basic field strip can be conducted relatively quickly without tools. 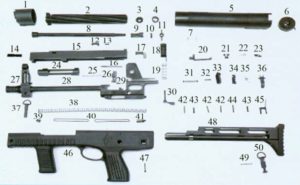 The most notable feature of this weapon is its 50-round helical magazine. Helical magazines, often confused with drum magazines, use a staggered-helix design, which allows for a substantial increase in carrying capacity in a relatively compact form-factor. This results in a cylindrical magazine, which is often (as in this case) mounted above the weapon’s receiver, rather than below it.

Whilst helical magazines have been repeatedly tested in western countries (one early example of an internal helical magazine can be seen in the Evans Repeating Rifle, patented in the late 1860s, for example), they have typically found more favour in China, Russia, and their client states. Perhaps the magazines of this type which most western readers will be familiar are those used with the American Calico series of firearms. In fact, Qing expressly stated that the CF05 helical magazine design was influenced by a research trip a colleague took to the United States, where this person observed the Calico designs.  Nonetheless, the construction of the magazine is closer to the Russian PP-19 ‘Bizon’ sub-machine gun type.

Their inherently complex design makes helical magazines more prone to failure. The Chang Feng SMG manual gives a “failure rate” for the weapon of “equal to or less than 3 ‰”, or three failures in every one-thousand rounds fired (1 in 334, or thereabouts). This failure rate would be considered unacceptably high by modern western standards, even under the assumption that this probably refers to all stoppages rather than just parts ‘failures’.

Reloading the magazine is a much more complex operation than that for conventional detachable box magazines. According to the manual:

That wording will likely be opaque to most readers, but thankfully the manual also includes a table which makes the process comparatively straightforward. Paraphrased, it indicates: 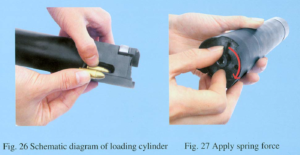 Whilst the export weapons have almost exclusively been seen with opaque black polymer magazines, the manual notes “This gun is equipped with black opaque cylinder, if cartridge indication is required, brown semitransparent cylinder could be equipped”. The weapon is typically offered for export with Chinese-made accessories, including a laser/light module (LLM; the most common appears to be the LLR-2), optical day sight, grenade launcher, and suppressor.

The latest model of the gun features HK-style red and white pictographic safety/selector markings, new furniture textures, a forward-canted front pistol grip and trigger guard, a modified stock design, and the model name moulded into the plastic on the left-hand side of the weapon. 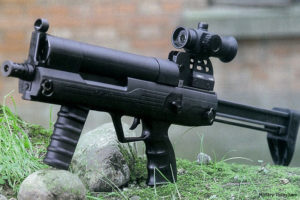 The suppressor attaches via a left-hand metric thread on the barrel, located behind the muzzle device. A retaining/indexing pin is located below the muzzle. The manual recommends disassembly and servicing of the suppressor after 150 rounds have been fired. Some limited suppressor testing was undertaken by Dr. Philip H. Dater & Dan Shea, the results of which were published in the Small Arms Defense Journal, V3N4. 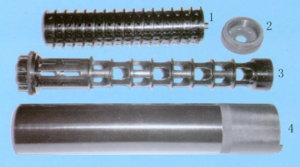 The Chang Feng sub-machine gun has been documented in service with Chinese police and paramilitary forces. It is used by the elite No. 1 Detachment of the Beijing Special Weapons and Tactics Unit, known as the Blue Sword Commando Unit. Other police units around the country have also used the weapon, and it has been documented in a number of high-profile police actions, including protection of the Beijing Olympics and a hostage rescue action in Changchun, capital of China’s northeast Changchun Province.

The weapon is also issued to components of the People’s Armed Police, including 3rd Group, 13th Detachment of the Beijing General Corps, know as the Snow Leopard Commando Unit. Snow Leopard personnel were observed carrying the weapon during training prior to the Beijing Olympics and in the Sino-Russian ‘Peace-Mission 2007’ joint exercise. In recent years, Chinese security forces are believed to be moving away from the Chang Feng design, towards new designs which are supposedly capable of firing a broad range of 9 × 19 mm ammunition, from less-lethal to +P+ loads. Nonetheless, those that remain in arsenals are likely to continue to be seen. 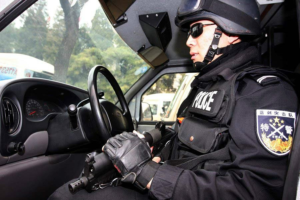 A number of export sales have also taken place, with confirmed transfers to Burman (Myanmar), Venezuela, and Uganda. In Venezuela, the weapon is used in a close personal protection role by the 509 Special Forces Battalion of the Army, Presidential Honor Guard personnel, and members of the Special Unit for Security and Protection of State Personalities (UESPPE). 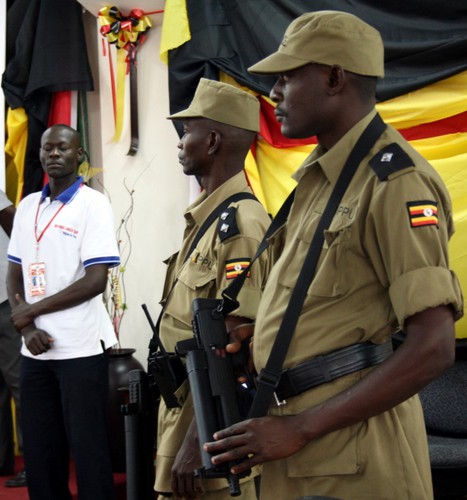