The ‘Caribe’ sub-machine gun is a prototype design under development by the Compañia Anonima Venezolana de Industrias Militares (CAVIM) in Venezuela. Very little is known about the design, with government sources claiming it has been in development since 2006. Initially known as the F-Caribe, the current working design appears to be known as the C-Caribe, with the ‘C’ standing for ‘CAVIM’.

According to available sources, the C-Caribe is a hammer-fired sub-machine gun in a bullpup configuration, chambered for 9 × 19 mm. It has 30-round magazines, is select-fire capable, and has a cyclic rate of some 1,200 rounds per minute. It is said to weigh 3.42 kilograms empty. Some photos and videos show the weapon with a threaded muzzle, and a suppressor appears to be in development for the weapon.

The Caribe was first shown to the public in June 2018, when a prototype was presented to the Commander General of the Army and CAVIM officially released a promotional video. In May 2019, the profile of the weapon was dramatically increased when President Maduro, speaking on live TV, approved seven million US Dollars for its development, and suggested that it should be issued to the militia. 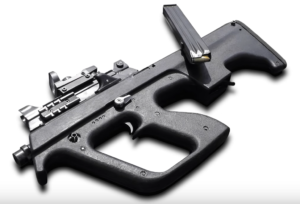 Since then, former director of Arms and Explosives (DAEX) for the Venezuelan Armed Forces (FANB), Admiral Tamayo, has vocally criticised the Caribe project and denounced it as a publicity stunt, calling it “nothing more than a cobbled together submachine gun”, made using existing parts from other weapons in the national armoury. At this stage, the future of the Caribe remains to be seen.

Remember, all arms and munitions are dangerous. Treat all firearms as if they are loaded, and all munitions as if they are live, until you have personally confirmed otherwise. яндекс If you do not have specialist knowledge, never assume that arms or munitions are safe to handle until they have been inspected by a subject matter specialist. You should not approach, handle, move, operate, or modify arms and munitions unless explicitly trained to do so. If you encounter any unexploded ordnance (UXO) or explosive remnants of war (ERW), always remember the ‘ARMS’ acronym: