During an offensive southwest of Syria’s Aleppo on 17 June 2016, anti-government fighters from Ajnad al-Sham recovered an unknown number of Iranian M18A2 directional anti-personnel landmines. Images of these were posted to the group’s Twitter account the next day. These are only the latest Iranian arms to be captured on this front, underscoring the degree to which this fight is increasingly the responsibility of Iran and its militias, rather than Damascus. This is also one of only a handful of cases in which Iranian landmine transfers has been documented by ARES, including transfers identified by the analysis of open-source media, as well as the use of traditional human intelligence techniques.

The mine(s) were recovered from what was recently the front-line, between the villages of Zeitan and Zorbeh, before Ajnad al-Sham and others from the Jaish al-Fath operations room overran it. Additional video evidence suggests these mines were placed by Afghan fighters from Liwa Fatemiyoun, or Iraqi fighters from Harakat al-Nujaba. 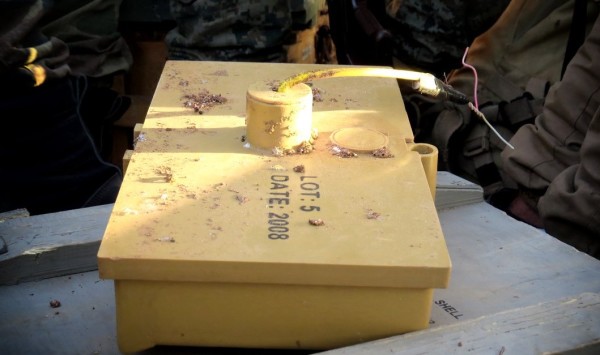 The Iranian M18A2 is a command-operated, directional anti-personnel landmine, comparable to the M18A1 ‘Claymore’, developed in the United States in the 1950s. Although the two designs are similar – the M18A2 is even advertised as a “Claymore” – they remain visually distinctive. The former can be recognised by its flat rather than concave face, tripod rather than scissor-type legs, and circular rather than rectangular peepsight. The M18A2 is also considerably larger, with nearly 300% more explosive filler. Markings indicating the year of manufacture and lot number are found on the reverse of the mine. The example documented by Ajnad al-Sham was produced in 2008 (see image above). In some cases, packaging may be marked ‘M18-2’ rather than ‘M18A2’ (see image below).

Iran has also been producing their own M18A1 type mines since before the 1979 revolution. Around 2,500 of these were exported to Bangladesh sometime before the early-2000s and may remain in the country’s inventory. Although visually similar to US-made examples, Iranian M18A1 models contain approximately 100 g less explosive composition (682 g vs 550 g), and a smaller number of steel spheres for fragmentation, which are larger in diameter (700 x 3.2 mm vs 510 x 6 mm).

Although Iranian landmines are only been infrequently documented in current conflicts, their use remains noteworthy. In July 2015, Iraqi popular mobilisation units (PMUs) recovered a large quantity of M18A2 type mines from an Islamic State arms cache in Saqlawiyah (see image below), suggesting that they had first been captured from either the Iraqi Army, or other PMUs. In March 2016, fighters from the Jund al-Imam PMU in Iraq were observed laying YM-III anti-tank mines – an Iranian copy of the Chinese Type 72 – between Baiji and Haditha. In both cases, the landmines documented appear to date from 2007. 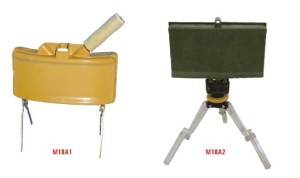