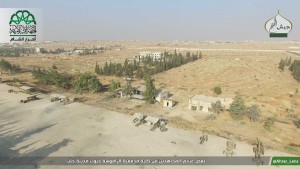 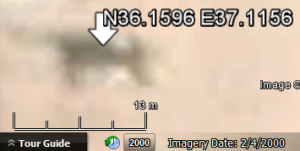 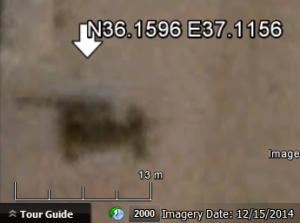 There are two known photos of Syrian soldiers standing atop this gun, one of them undated (published no later than February 2013), with the other believed to have been taken in 2014. 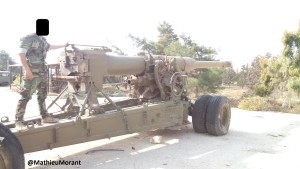 However, this is not the only example of this type of gun in Syria. On 7 March and 13 May 2015, two undated photos of S-23 guns were posted in a Facebook group ‘Encyclopedia of Syrian military’. The second photo (below) was widely shared. 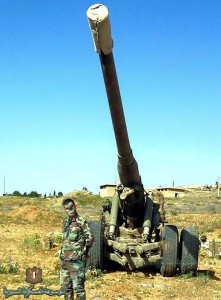 Whilst it is not clear when these photos were taken, it is reasonable to believe that these weapons may continue to serve with the SAA. However, 180 mm guns remain much rarer than those in other calibres. As such, resupply may pose an issue if the guns are operational. Nonetheless, Syria has historically acquired significant stockpiles of ammunition with its artillery pieces.

The Soviet Union is believed to have originally exported as many as 36 examples of the S-23 to Syria in the 1970s (see below), alongside more than a hundred other artillery pieces in more conventional calibres over that decade. If the captured gun is operational, and ammunition is available, the anti-government forces that have captured it will be able to engage area targets up to 30 km away, such as Hama Airbase or the Safira Defense Factories. With rocket-assisted projectiles, this range could be increased to more than 40 km away, potentially putting the Russian airbase in Khmeymim at risk.

The development of a heavy wheeled 180 mm gun for the Soviet Supreme High Command Reserve (as part of a group of three artillery pieces on a unified carriage — the so-called ‘heavy triplex’) began in 1944 at design bureau run by Vasiliy Grabin. The first prototypes were ready in 1948, but the acceptance tests for the gun did not begin until 1955. As rocket technology developed, production was stopped in the same year, and only nine 180 mm guns were accepted into service with the Soviet army. 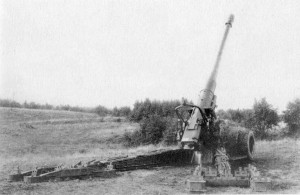 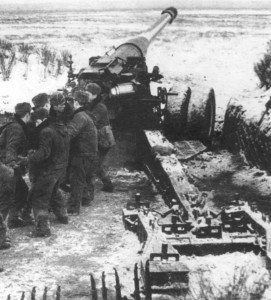 By the late 1960s, the US had begun to successfully employ the 175 mm M107 self-propelled gun in Vietnam, however the S-23 had already been removed from active Soviet service (although it continued to appear in military parades – Russia’s TASS news agency archive has photos of these guns from 7 November 1958, 1 May 1964 and 7 November 1970). In 1971, the US started supplying 175 mm guns to Israel. The USSR’s regional allies were concerned about this hard-hitting, long range artillery, and the manufacturing of S-23 guns was restarted in the Soviet Union. By the end of that year, 12 180 mm guns had been produced for Syria. The total number of guns delivered is unclear – various sources claim 10, 12, 25, and 36. The lower estimates appear more credible.

Syria (as well as Egypt) employed these guns for the first time just two years later, during the Yom Kippur War against Israel. The S-23 primarily saw action in artillery ‘duels’ near the Golan Heights. In that war, the Israel Defense Forces captured at least one such gun from Egypt. 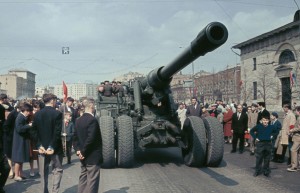 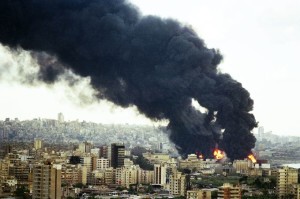 Flames and thick black smoke rise from burning fuel tanks fired upon by artillery of the Syrian army, in the Dora area of East Beirut, on 29 March 1989 (photo credit: AP).

In the 1980s, Syrian artillery was used in the Lebanese Civil War, and the S-23 gun saw action again. According to a November 1989 statement by Israel’s Defence Minister I. Rabin, after the fighting started in March of that year, Syria “mercilessly” shelled East Beirut’s Christian neighbourhoods with 180 mm guns and 240 mm mortars. The use of these guns was also reported by UPI and Associated Press, the latter indicating that Syrian artillery positions were located at the beach and the corniche, while a source in Manara (a north-western neighbourhood of Beirut) told the Chicago Tribune that one of the guns was deployed at an empty lot near her house. Pulitzer Prize winner Paul Greenberg even wrote about the use of the S-23, claiming that they were used by Christian militias against Syrian troops. This latter claim could not be independently verified.

An apocryphal story of uncertain origin regarding the use of the S-23 in the Lebanese Civil War persists to this day. The story asserts that, in 1983, the Syrian 180 mm guns based in Lebanon fired at – and damaged – the USS New Jersey battleship, which had arrived on September 25 to support the international peacekeeping force. This appears highly unlikely to have occurred.

The S-23 is a relatively precise artillery gun. Probable error data is available for the 3OF23 180 mm HE rocket-assisted projectile (see data below), and indicates that when properly employed by trained crews, supported by observers and making use of correct adjusting fire techniques, the S-23 could achieve reasonably accurate results.  The precision achieved by standard 53-F-572 HE projectiles without auxiliary propulsion – with a lesser maximum range of 30.39 km – would likely be superior.

A note on projectile designations: When dealing with the projectiles of the Soviet Union/Russia (and several other former Eastern Bloc countries), the ‘V’ in the designation stands for ‘vystrel’, or ‘round’, referring to the projectile, the propellant (or in some cases expelling) charge, and the fuze. Where applicable, it also includes the cartridge case. Hence ‘53-Ф-572’ and ‘3ОФ23’ refers specifically to the HE projectile alone, whilst ‘53-ВФ-572’ and ‘3ВОФ28’ refers to the round in its entirety (whether assembled or not).

Additionally, GRAU indices, including projectile designations, may be shortened in Soviet and Russian military usage by dropping the first digit or first two digits (and the corresponding first dash). Hence ‘53-Ф-572’ and ‘3ОФ23’ become ‘Ф-572’ and ‘ОФ23’. These shortened designations are usually included in projectile and packaging markings. The use of dash marks as separators follows an index system introduced in 1938 (the present index system, which does away with the dash marks in most cases, was introduced in 1956).

The author may be found on Twitter (@ain92ru). Special thanks to Kirill Mikhailov, Mathieu Morant, N.R. Jenzen-Jones & Ali Richter.