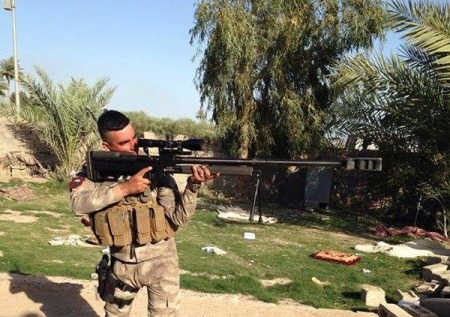 Recent photos to emerge from Iraq show government troops with new Iranian  AM50 (sometimes written ‘AM-50’) anti-materiel rifles (AMR) and Russian ORSIS T-5000 sniper rifles. Whilst initially misidentified as the Austrian Steyr HS .50, the photos suggest that these rifles are in fact an Iranian produced copy of the HS .50, known as the AM50. In 2006/7 Iran acquired 800 Steyr HS .50 rifles; shortly thereafter, Iranian copies of the rifle were observed.

Produced by the Iranian state-controlled Defence Industries Organization’s (DIO) Individual Combat Industries Group (ICIG), the AM50 is a single-shot, bolt action anti-materiel rifle chambered for 12.7 x 99 mm (.50 BMG). The most easily distinguished differences between the HS .50 and the AM50 are in the grip and barrel, as shown in the photos below. The Iranian AM50 seems to make use of the pistol grip which ICIG produce for the S-5.56, a copy of the Chinese CQ rifle (itself an AR-15 clone). HS .50 rifles are themselves derived from a Heinrich Fortmeier design developed for Steyr in 2002, now available as the Fortmeier .50 BMG. Whilst the Iranian AM50 features the modified bolt handle and muzzle brake adopted by Steyr in the production HS .50 rifles, the barrel appears to be of an evenly tapered, non-fluted design, as as seen in the Fortmeier rifles, rather than the stepped, fluted design seen in the Steyr rifles. 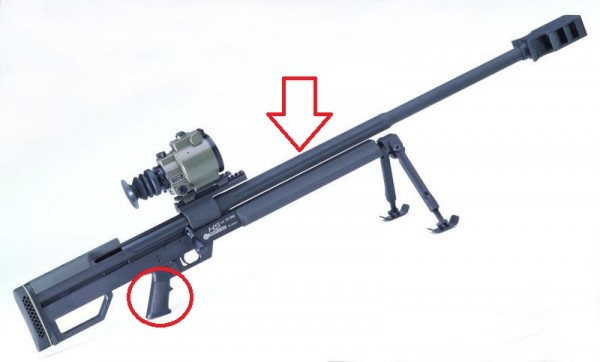 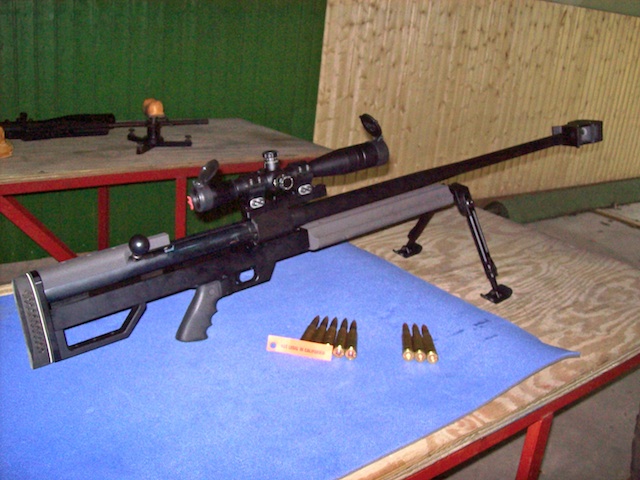 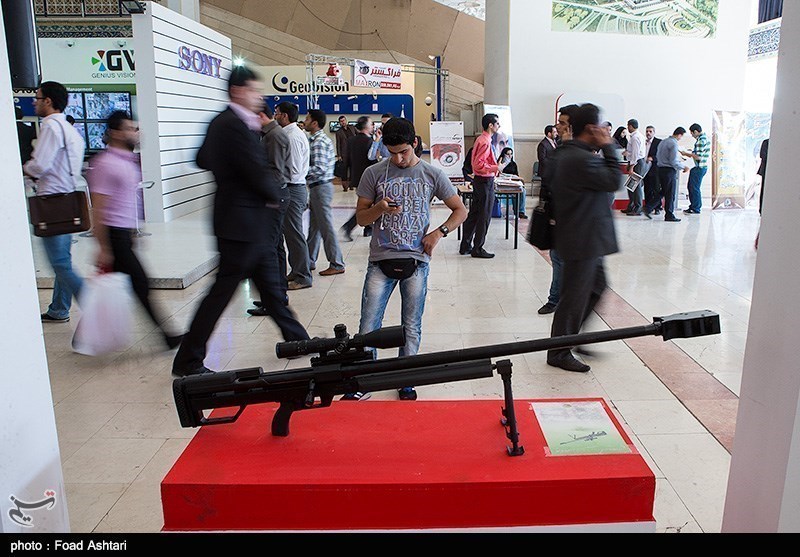 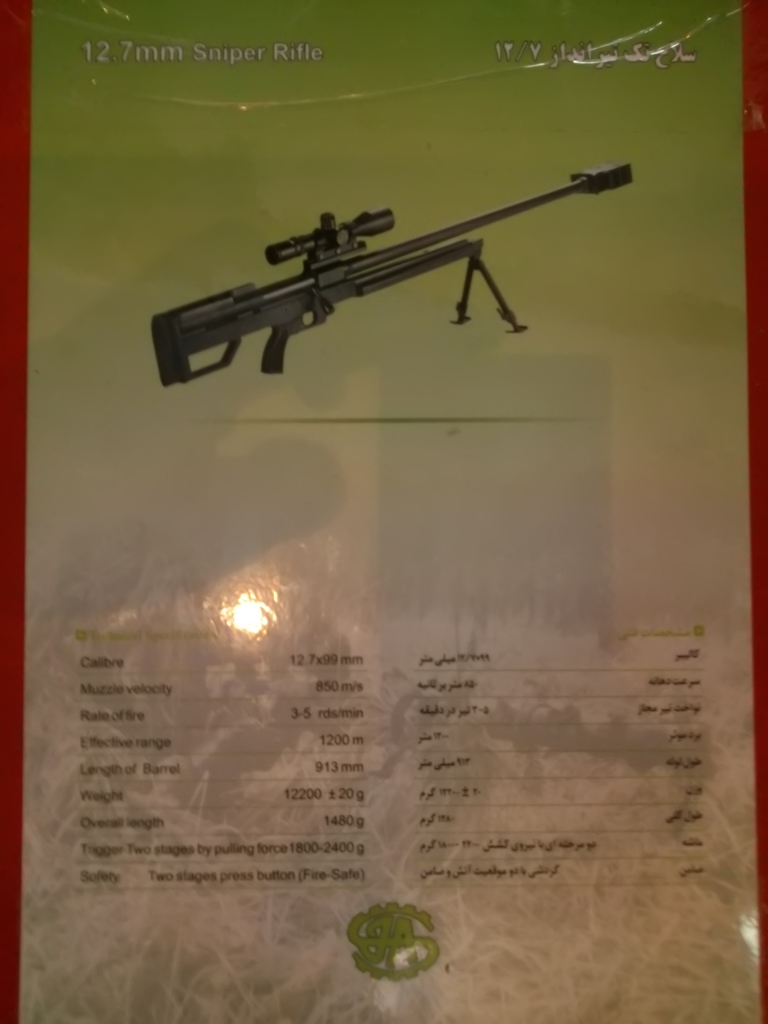 Iranian AM50 brochure. Amongst other technical details, it gives typical muzzle velocity as 850 m/s, and effective range as 1200 metres (source).

Whilst the AM50 has been documented in use with both Iranian and Syrian government troops, and a handful have been observed in the possession of non-state armed groups in Gaza and Syria, it is only in the last few months these pictures from Iraq have surfaced. How these rifles came to be in possession of Iraqi troops is unknown, however there are two possibilities which are more likely than others. 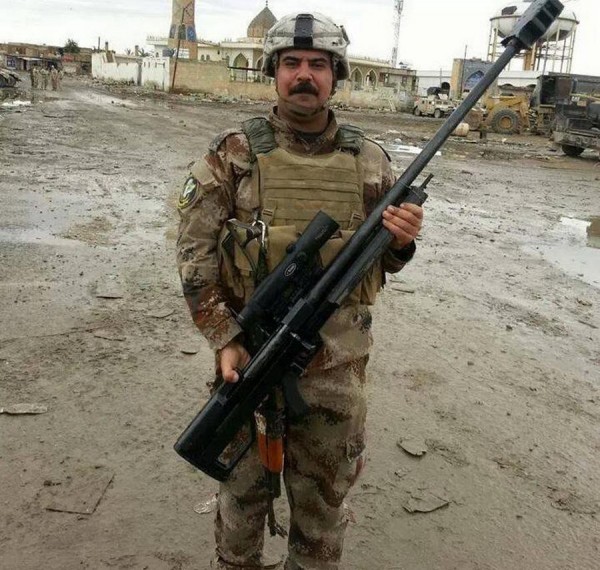 First, the rifles may have been captured or acquired from one of the non-state armed groups in possession of these weapons. They may have been captured from fighters from the Islamic State of Iraq and the Sham (ISIS), who are known to have captured such weapons from forces loyal to Assad, and are also operating inside Iraq. Alternatively, Iraqi troops may have acquired these rifles through the pro-government Shiite militias, who in turn may have received such rifles from Iran.

It is also possible that Iraq purchased the AM50 directly from Iran. According to a report from Reuters in February, Iraq signed a deal to buy arms and ammunition from Iran worth $195 million USD. The documents cited by Reuters included provisions for “light and medium weapons.” Whilst such a contract would violate UN sanctions against Iran, it remains a possibility that these weapons could have been delivered to Iraqi troops. 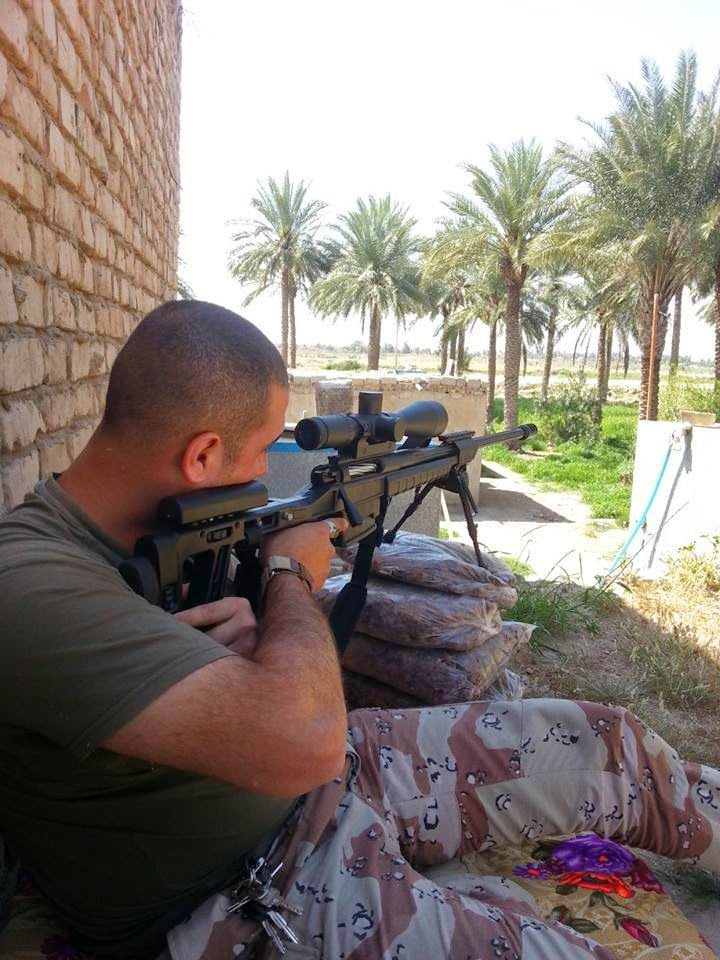 The presence of the Russian ORSIS T-5000 sniper rifles in Iraq is more readily explained, with the Iraqi government having purchased them from Russia as part of a recent, sizeable arms deal. As with the AM50, pictures of the T-5000 began to appear around March 2014. In one of the photos we can see Iraqi soldiers with both AM50 and ORSIS T-5000 rifles

The ORSIS T-5000 is a precision bolt-action sniper rifle fed from a detachable box magazine (5 or 10 rounds). Manufactured in Moscow at Promtechnologies Group’s ORSIS1 rifle factory, the T-5000 is produced in three different calibres: 7.62 x 51 mm (.308 Winchester), .300 Winchester Magnum, and .338 Lapua Magnum . There is currently no clear indication of which calibre, or combination of calibres, Iraq purchased.